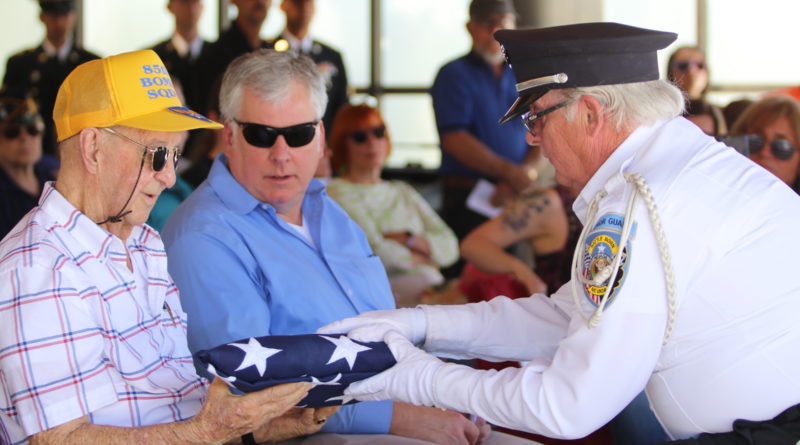 World War II pilot Jack Hall of Minden sat in a small air-conditioned room at the Northern Nevada Veterans Memorial Cemetery waiting for the 18th mission of the Missing in Nevada ceremony to begin Friday afternoon.

Soon, he and a crowd of almost 200 people sat sheltered in the pavilion from the searing heat of a July summer afternoon. The 15 veterans being honored included 14 men who served in the Army and the 15th in the U.S. Marine Corps, all but two seeing action during World War II. Their remains were in care of a Reno mortuary for years, if not decades. Patriot Guard Riders led a procession that began in Sparks and wound itself through downtown Fernley before arriving at the NNVMC.

“This should’ve been done a long time ago,” said 96-year-old Jack Hall, who flew B-25s over northern Italy during the last six months of the war. “Now, they’re making it right.”

For nearly two years, the Nevada Veterans Coalition, along with assistance from a bank of volunteers, the Nevada Department of Veterans Service and other private and government agencies, have been identifying forgotten veterans’ remains and then a providing a military service complete with an eulogy, the Patriot Guard Riders and NVC honor guard, a 3-volley salute, a flag-folding ceremony, the playing of “Taps” and interment at the columbarium wall.

“I’m glad to be here to witness this,” said Hall, who moved to Minden 43 years ago after retiring from private business and the U.S. Air Force Reserves as a major. He spent 22 years in the military, the final years as an aircraft mechanic at Travis Air Force Base midway between Sacramento and Oakland.

The retired aviator knows too well the horrors of wars and losing fellow airmen to enemy antiaircraft fire. Many of those bodies were never recovered.

As a guest at the Missing in Nevada ceremony, Hall also learned of another veteran’s service as told by NDVS Director Kat Miller. She recalled the story of Clifford Glen — or Sandy — Prophet, who enlisted in the Army as a private after World War II broke out and served for two years. Miller noted the size of the 5-foot, 4-inch, 118-pountd Oklahoman.

“He may not have been the strongest recruit they had, but after years of grueling work in the dust bowl of Oklahoma, I just bet he was one of those lanky, rugged guys that knew how to handle himself,” Miller said.

Away from the war, he and his wife Vivian moved to Napa, Calif., where they raised two boys, and after his retirement, Sandy and Vivian Prophet moved to Reno. Sandy died in 1981, followed by his wife in 1994 and his two boys, Ron in 2003 and Larry in 2013.

“But because Sandy does not have family with us here today does not mean he — or the rest of our veterans — were not loved,” Miller said. “I found great pictures of Sandy and his family and from their genuine smiles and body language on that family, you could tell how very close their tough childhoods had brought them.”

Miller, though, said Sandy Prophet and the other veterans would be making their final walk alone if not for the dedication and determination of the NVC and others.

“Today we are here to make the final walk with them — to honor their service and say goodbye, comrade,” Miller said. “We did not know you, but you are one of us.”

Hall, who said he was honored to be at the Missing in Nevada ceremony to receive the flag that was placed in front of the urns, grew up in Piedmont, Calif., and attended two years of junior college. After his high-school graduation, he became an airplane mechanic at McClellan Field northeast of Sacramento, but the events of Dec. 7, 1941 — the bombing of Pearl Harbor — changed his direction in life.

“Then stuff hit the fan,” he recalled of Dec. 7. “I was working on a P-40 when we were surprised on that day. We had two shifts, days and nights, but afterward, we had three shifts. The boss told me to take off and be back at 1 in the morning. I was put on the third shift.”

When the U.S. Department of War opened another repair station at Elmendorf Field outside of Anchorage, Alaska, Hall and a cousin left sunny California for The Last Frontier. But after a year, Hall wanted to fly and enlisted to become a pilot in the Army Air Force, the predecessor to the U.S. Air Force. After passing a battery of tests to determine if he was more qualified as a pilot, bombardier or navigator, he entered the Army Air Force aviation training in central California and received the news he wanted to hear. He qualified as a pilot.

“My pilot training took me eight to nine months total, and I wound up in advanced training. I went to La Junta, Colo., and that was a great deal. They were flying B-25s. That was a big step.”

The U.S. Army Air Force had taken over the airfield and expanded it to accommodate a large number of aircraft and training flights. For Hall, flying the B-25 medium bomber was his top priority, although his training also alternated between single- and twin-engine aircraft. After two more stops for training he found himself in Italy during the last year of the war flying nighttime bombing raids of the Po River in northern Italy, trying to disrupt the Germans from crossing the river and heading toward the Father land.

“It turned out OK, but it was difficult high flying trying to find these spots where the Germans were crossing,” he added.

If nighttime flying presented its challenges, so did the harsh winter of 1944-45. Hall said icing became a problem when planes took off from their field at Grosseto and flew over a high mountain range toward the river.

For additional background on Jack Hall, go to https://www.recordcourier.com/news/local/minden-air-force-veteran-celebrates-74-years-of-flying/