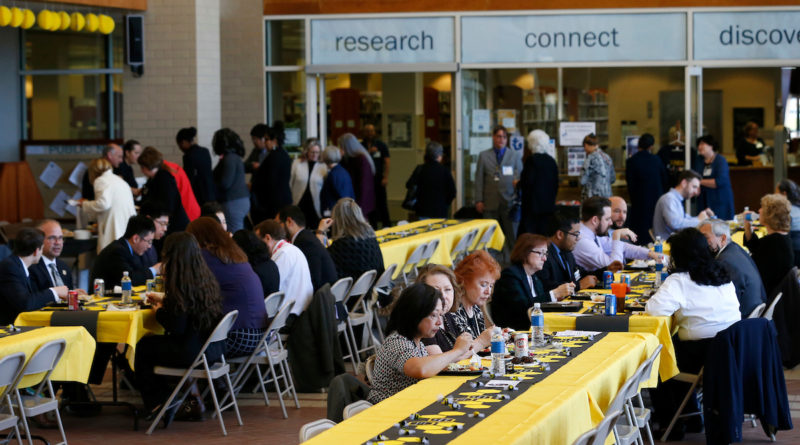 Librarians and library supporters gathered Wednesday at the Nevada Legislature to promote the programs instituted with last session’s dollars and advocate for continued funding.

“We are such a critical part of every lawmaker’s community,” said Diane Baker, interim director of the Carson City library and co-chairwoman of the government relations committee for the Nevada Library Association. “Nevada Library Day at the Legislature is a touchstone for the individuals from each community to connect with legislators and emphasize the great things the state’s funding has done in their communities.”

Participants met Wednesday morning at the Adams Hub for Innovation for informational workshops pertaining to current and proposed legislation, as well as a presentation on effective lobbying.

“After the opening workshops, participants came to the Legislature to speak with legislators and sat on the Senate floor,” Baker said.

Lawmakers and staff were invited to the Nevada Library Association luncheon at the State Library & Archives. Exhibits and educational tables were displayed highlighting projects that were instituted with the $500,000 funding from the 2017 Legislature.

“The one-shot funding that was supported unanimously in 2017 was the ability to show what could be done in local communities with additional funding,” Baker said. “From emerging technologies, workforce development, databases, bookmobiles and collection development, we were able to make a difference in communities across the state.”

Library workers are asking the Legislature to create $1.5 million in permanent funding.

“Through these pilot programs, local libraries were able to demonstrate the impact on the community,” Baker said. “Permanent funding would keep that high level of involvement in the communities and ensure it is available statewide.”

Joan Dalusung, assistant library director for the Washoe County Library System and co-chairwoman of the government relations committee for the Nevada Library Association, said libraries working together makes them each stronger.

“This funding supports statewide databases that we all benefit from,” she said. “None of us would be able to afford databases if we had to pay for them individually.”

The permanent funding, she said, would allow programs — such as the workforce development being piloted in Southern Nevada — to expand across the state.

Carol Lloyd, director of the Churchill County Library, said Nevada Legislature Day is a way to join forces across the state.

“It gives us an opportunity to do face-to-face and to present a united voice with a united ask,” she said. “I try to invite my legislators to events at my library, but this is a way we can all do it together.”

Libraries are the one equalizer for our communities where kids and adults have access to information and it’s not based on how much money they have,” Denis said. “Information is critical for success in our society.”

Editor’s note: This is the latest in a series of articles to highlight library programs funded by the Nevada Legislature. The Nevada Library Association is asking for permanent funding in this year’s legislative session.