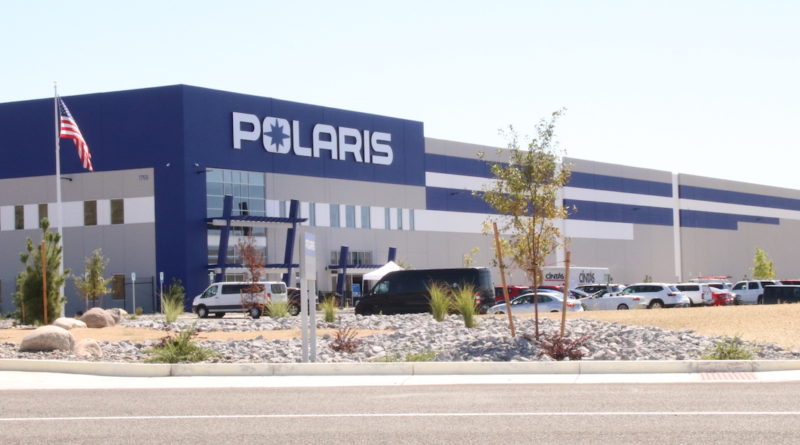 “We’re very proud of this being Polaris’ first western distribution center,” Edgington said. “Polaris will provide a boost for economic development and will create many jobs for people in Fernley, Reno, Fallon and even Lovelock. We know the region will continue to grow.”

Groundbreaking occurred in late August 2018, and within 11 months, the facility began its early operations and shipments in mid-July. Ryan Companies USA Inc. constructed the building that is southeast of Interstate 80’s Nevada Pacific Parkway exit. Edgington said Polaris has invested $47 million in the distribution center that will support the company’s Aftermarket, Parts, Garments & Accessories (Aftermarket, PG&A) businesses with the added capacity, delivering system and customer service. He said Polaris has 14 different lines of products, and the Fernley facility will serve Polaris, TransAmerican Auto Parts and Kolpin customers.

“Warehousing is part of Nevada, and we’re so close to California and the whole West Coast,” Edgington said, noting Fernley is only 250 miles from the Port of Oakland (Calif), a major shipping point for overseas markets.

Edgington said this was the industrial center’s first major construction in 15 years. Plans were also announced in July to develop a 4,300-acre premier distribution, manufacturing and commercial center south of Polaris.

Prior to coming to Fernley, the Minnesota-based Polaris searched the West for a distribution center that would meet its needs for a growing customer base. Steve Eastman, president of Aftermarket, PG&A, said Polaris analyzed many areas and felt Fernley offered everything the company needed. He said Polaris is a $6 billion company and is the global leader in power sports by serving more than 100 countries.

Eastman said the state-of-the-art facility on 11 acres will support an expansive range of products and brands Polaris, which was founded in 1954. The product lineup includes off-road and all-terrain off-road vehicles, Indian motorcycle mid-size and heavyweight motorcycles, Slingshot moto-roadsters, snowmobiles, and deck, cruiser and pontoon boats.

“We did a lot of research where are customers are and how we can serve our customers better,” Eastman said. “This was the right location, but we also looked at the access, the great people to employ and the facility. This is the best place we identified as we scanned the southwest United States. We feel we made the right decision, 100 percent confident and thrilled about the path going forward.”

Andy Williams, vice president, Supply Chain — Parts, Garments & Accessories, said Polaris is excited to be in Fernley and Lyon County. He echoed Eastman’s assessment, saying the company made the right decision. From the Fernley facility, he said Polaris will be able to serve its western customers in both the United States and Canada.

“This facility is designed around our customers’ needs and wants,” he added.

“When this goes fully operational, it will be pretty neat,” he said.

According to Polaris, the facility employs 50 people with plans to employ up to 100 at full capacity. Projects Manager Ben Mollman was one of the first employees to arrive in Fernley during construction from a similar Polaris distribution facility in Vermillion, S.D. Overall, he said, Polaris interviewed more than 500 applicants for 40 new openings.

“We spent hours looking for the right people,” he added.