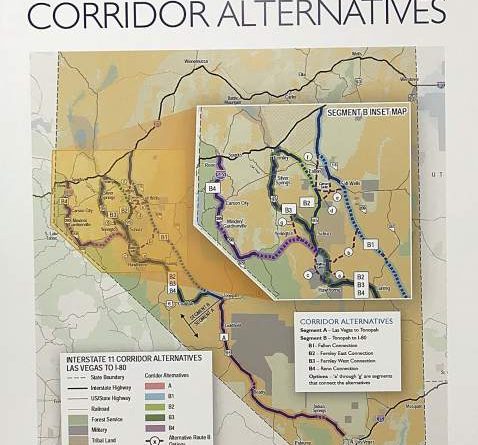 Local government officials said Wednesday at an informational meeting that only one alternative of a new interstate highway from Las Vegas along the U.S. Highway 95 corridor to Interstate 80 would benefit Churchill County.

The other three alternatives, said Churchill County Commissioner Bus Scharmann, would be devastating to the county, and he favors the Interstate coming near Fallon.

Since 2001 when the Intermodal Surface Transportation Efficiency Act of 1991 was first signed, the act identified 80 possible corridors. Since then, the plan has been modified. According to the Nevada Department of Transportation, “The Canamex Corridor, as defined by U.S. Congress in the 1995 National Highway Systems Designation Act, was a joint effort involving Arizona, Nevada, Idaho, Utah and Montana to promote the development of a continuous four-lane highway from Mexico through the U.S. into Canada to facilitate trade among the three countries and minimize traffic and congestion.”

Construction of 12.5 miles of Interstate 11 around the southern and eastern perimeter of Boulder City is already underway and should be completed this year. From Las Vegas, I-11 will follow much of the U.S. 95 corridor to I-80 in western Nevada.

“The current Northern Nevada Alternatives Analysis study will identify and screen corridor alternatives within the broad study area, recommending the most feasible alternative(s) to advance into future NEPA (National Environmental Policy Act) studies,” NDOT cited from the report. While the segment to construct I-11 from Las Vegas to Tonopah has been set, the next phase or Segment B offers four alternatives from Tonopah to I-80:

B1 — This route traverses mostly federal land and crosses northwest toward Salt Wells, 15 miles east of the city, and intersects U.S. 95 north of Fallon.

B2 — This route follows U.S. 95 but heads east around Walker Lake and then north toward Churchill County veering northwest across Naval Air Station Fallon Navy training grounds, across U.S Highway 50, to Fernley.

B3 — This route follows B2 to north of Walker Lake but then heads northwest in Lyon County through prime Mason Valley agricultural land and skirts Yerington on its way toward Silver Springs and then Fernley.

B4 — This route heads west from the northern point of Walker Lake through Wilson Canyon in southern Lyon County and then skirts the Sierra Nevada range from south of Gardnerville to Reno, which, on paper, appears to parallel I-580.

Segment A between Las Vegas and Tonopah is the only alternative because of topographical constraints and land management patterns. Any new routes will not impact main street corridors.

Scharmann made it quite clear that he favors the B1 route. He said several years ago, the commission studied the route from Mexico to Canada

“Looking at the alternative, is it Mexico to Reno?” he chided, referring to the B proposal. “It would be devastating to the Churchill County economy if we lose traffic from Reno to Las Vegas. B1 seems, to me, to be the most viable route.”

Scharmann said B2 would cross Bravo 16, a SEALs training area that the U.S. Navy seeks to expand in its modernization plan. Last year’s flood mitigation sent more than 600,000 acre-feet of water into the same area, which eventually flowed eastward to Carson Lake and then to the Stillwater Refuge.

Scharmann said B3 would go through valuable, rich land in the Mason Valley and questions the viability of B4 extending toward the Reno area, which is experiencing a boom in growth and industry that is causing traffic and housing problems.

“We have studied the B1 route, and I would highly recommend B1 as your goal,” Scharmann said.

Pete Olsen, chairman of the Churchill County Commissioners, echoed Scharmann’s assessment and said B1 is the most logical route.

“In your study you look at economic vitality,” she said. “But does that include the impact of the economy?”

If NDOT disregards B1 and Churchill County, she said the area will be extremely hurt.

Fallon Mayor Ken Tedford said the county has looked at this plan extensively, and he found the material informational, although the project extends so far into the future.

“B1 seems reasonable for me and good for our community,” he said

“B1 is definitely the most favorable route at this time,” he said, adding he wonders if any studies have been done about the corridor extension to Oregon and Idaho. “Going with B4 will end up into the Reno Spaghetti Bowl, (a major intersection for interstates 80 and 580,) where they have wonderful accidents every day and make the tournament of thrills up there.”

Lockwood said the traffic on I-80 near the Tahoe Reno Industrial Center could be impacted more than what it is with additional accidents. She said discussions are needed to improve I-80.

Only one person spoke for another alternative route, B2. Alan Harrison, a lifelong resident of Churchill County for 60 years, said he’s not optimistic to see the project completed during his lifetime. He said the purpose of the new freeway is to move freight. He said the route going north from Yerington and eventually tying in with TRIC may be the most expeditious.

He cited the advantage of the Silver Springs Airport, which can eventually handle air freight and cargo, which, he said, could go hand-in-glove with an enhanced highway. He also sees a possible tie-in with a route through Fallon.

Kevin Verre, NDOTs’ project manager for the Interstate 11 Planning and Environmental Linages, said presentations have been made in four rural communities and will wrap up in Carson City. He outlined the I-11 and Intermountain West Corridor Study and explained the planning between Las Vegas and Phoenix and in both Southern Nevada near Boulder City and Arizona between Wickenburg and Nogales.

Verre said the north-south corridor is nothing new, but over the years, many transportation professionals have been working extensively on the project. While the initial studies focused on Las Vegas to Phoenix, he said a 2014 joint study determined the high-level connectivity involves the fast track between Las Vegas to I-80. As a result of the project development process, the PEL is developing and evaluating its current study on a wide range of corridor alternatives, assessing environmental impacts and determining selected alternatives, designing roadway improvements, acquiring rights-of-way and constructing transportation improvements.

Verre said economic goals affecting the routes were determined during a planning process. The current study, Verre said, is being done in incremental phases. Because the initial study and planning may take between 10-20 years, he said it’s difficult to plan the funding for the project, but he said the funding will eventually come out of state budgets. Verre said no additional money will come from the federal government.

From now until April 13, Verre said the state is accepting public comments from individuals and government agencies. Once they identify possible corridor alternatives from most to least favorable, then Verre and his team will release those results sometime in June. Additional analysis will ensue with results being released during the late summer, early fall.