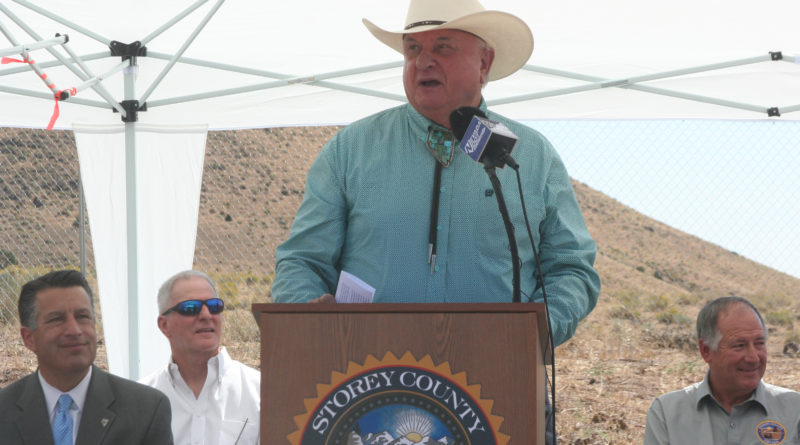 Standing at the podium during a groundbreaking ceremony for the beginning of the USA Parkway extension last June, Lance Gilman, principal and director of the Tahoe Regional Industrial Center, pointed to an empty piece of land and said a major announcement would be coming soon about a new company moving into the industrial park.

That company turned out to be Google.

Monday, Gilman again stood at the podium, this time during a ribbon cutting ceremony to commemorate the completion of the extension project, and announced major new arrivals to the TRIC.

While saying he was bound not to reveal any names because of nondisclosure agreements, Gilman said a group of developers is planning a high-tech nanoscience and nanotechnology research center on 1,100 acres.

Gilman said another company is about to close a deal on more than 3,000 acres, while Reno Land Development Company is bringing 700 acres of future development.

The new additions to the industrial center, following on the heels of companies like Walmart, Tesla, Switch and most recently, Google, that are realizing the dream Gilman and his partner Roger Norman had when they first envisioned building the world’s largest industrial park.

“There’s 150 companies out here, that are all prospering and doing wonderful jobs in our Nevada desert, in TRI,” Gilman said.

Gilman relayed a story about how, after he’d first came to Nevada, he tried to get Norman to join him in a game of craps.

“He said, Lance, I don’t gamble,” Gilman said. “So he bought this ranch of 104,000 acres, dropped about $50 million in the plate immediately, on the if-come that he could build the largest industrial park of its kind in the United States out in the Nevada desert, 10 miles outside of Reno. Now if that’s not gambling, you guys, I don’t have a clue what is.”

Norman and Gilman’s gamble has paid off spectacularly and helped transform the Northern Nevada economy.

“We can talk about companies that weren’t in our vocabulary six years ago,” Gov. Brian Sandoval said during Monday’s ceremony.

“It’s the downtown of TRI,” Gilman said. “Roger and I would not have visualized this, you guys,”