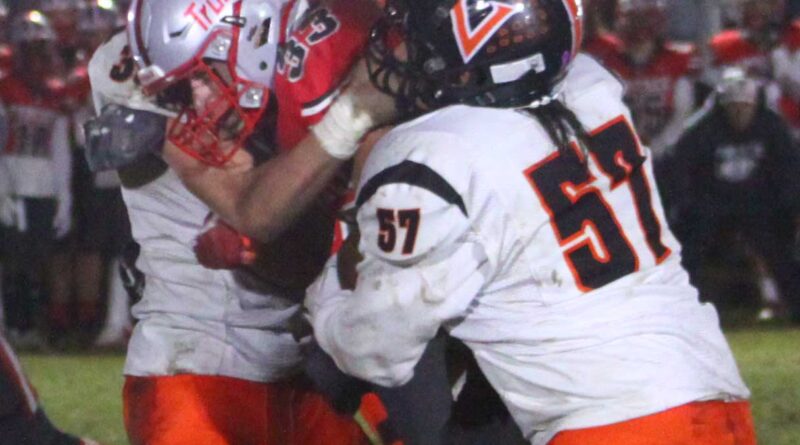 For three quarters, Friday night’s Northern 3A first round game between Fernley and Truckee was everything a playoff game should be. Then the fourth quarter was incredible.

The Vaqueros used a kickoff return for a touchdown and a successful onside kick to kickstart a rally from a 15-point deficit in the final 6:22 of the game, then stopped a Truckee two-point conversion to claim a 35-34 win and advance to a Northern 3A semifinal game at Elko at 6 p.m. next Friday.

The two teams combined for 34 points through three quarters, then scored a total of 35 between them in the fourth. The Vaqueros scored 22 of those, all coming after they fell behind 28-13 with 6:22 left in the game.

“It was pretty exciting there, wasn’t it?” said Fernley coach Chris Ward. “I think that’s why you don’t give up on any play. You play to the end of the game – you never know what’s going to happen, what kind of breaks you’re going to get.”

When Truckee’s Max Carter scored on a 10-yard run with 6:22 left in the game, it completed a run of 28 straight points for the Wolverines, turning a 13-0 first-quarter Fernley lead to a 28-13 Truckee advantage. At that point, things were looking pretty bleak for the Vaqueros, even to Ward.

“To be honest with you, I was starting to think of what the heck I was going to say to the kids at the end of the game and getting my plan of attack for next week, but things started clicking, things started working our way,” Ward said. “So glad we didn’t have to get into that talk right off the bat.”

On the kickoff following that touchdown, Carson Kingston scooped up the bouncing ball at the Fernley 18-yard line and started to his left, but encountered traffic almost immediately. He stopped and turned back to the right, eluding an arm tackle, and when he got to the corner, there was nobody between him and the end zone.

“It kind of felt like backyard football for a minute,” Kingston said. “I just decided to go with the flow and have fun. No one was beating me.”

The touchdown and subsequent two-point conversion brought the Vaqueros back within 28-21, but equally as important, it breathed life back into a Vaquero sideline that had sagged noticeably as the game seemed to be slipping away.

“Our energy level was starting to drop off,” Ward said. “We needed something to happen. Carson taking that kickoff return for a touchdown, I think that revitalized us.”

Fernley then tried and recovered an onside kick, getting the ball right back at the Truckee 48-yard line. Six plays later, Emiliano Alonzo took a handoff on a dive play and bounced it around the left corner for a 9-yard touchdown, then he ran in for a two-point conversion, and less than three minutes after almost all seemed lost, the Vaqueros were suddenly ahead 29-28.

Two plays later, Traven Cassinelli undercut an out route by a Truckee receiver and intercepted a pass and returned it to the Truckee 12-yard line. A personal foul on Truckee after the play put the ball on the 3-yard line, and two plays later, quarterback Julian McIntyre kept the ball after a dive fake and plunged into the end zone for a 35-28 lead with 2:36 left in the game. But this time, the two-point conversion try came up short, leaving the Wolverines two-and-a-half minutes to try to tie or win the game.

They didn’t need anywhere near that long. A 27-yard run by Damon Parisi moved Truckee to its own 45, then on second-and-9, quarterback Jackson Kahl found tight end Tyler Lamperti running all alone on a deep post route. Lamperti collected Kahl’s pass in stride and cruised to the end zone with 1:51 remaining.

“They know what they’re doing in their passing game and they have always got something up their sleeve for the end of the game,” Ward said.

Rather than kick the trying extra point, Truckee coach Josh Ivens elected to go for two to take the lead. But JR Reyes came up from his safety position and hit Carter at the 1-yard line, keeping him from getting to the goal line.

“That kid did not go forward after that hit,” Ward said. “He stuck him.”

Kingston then recovered Truckee’s onside kick, and after one running play, the Vaqueros were able to take a knee twice, then celebrate the win.

“My team, we played with our hearts out today,” said Alonzo, who scored the go-ahead touchdown. “We’re trying to take this all the way, trying to make another state title this year.”

Even before the fourth quarter pyrotechnics, the game epitomized playoff football. The Vaqueros dominated the first quarter and a half, putting on a perfect demonstration of how the flexbone offense is designed to control the flow of the game. Then, for the next quarter and a half, Truckee showed its pedigree and toughness.

The Vaqueros controlled the ball for 41 offensive plays in the first half, while Truckee ran 13, and one of those was to take a knee to end the half.

But Fernley led just 13-7 at the half, because they were unable to score on two trips deep into Truckee territory in the second quarter.

The Vaqueros went 81 yards in 11 plays on the opening drive of the game and took a 7-0 lead on a 2-yard touchdown by Reyes.

After Truckee went three-and-out, a 59-yard option keeper by McIntyre set up Reyes for another touchdown, this one from five yards, and Fernley was up 13-0.

Twice Fernley got the ball back with a chance to go up by three scores. The first time, a holding penalty and a false start put them in a long-yardage hole, and they were forced to punt. The second time, they were set up to go for it on fourth-and-5 from the Truckee 49, but another false start forced them to punt. But twice, the Vaqueros were called for a penalty on the punt and forced to kick it again, and on the third try, the snap was too high for the punter, Cassinelli, and he was forced to scramble and was tackled at his own 15-yard line.

Two plays later, Jason Roth scored on a 7-yard run for Truckee and despite not yet gaining a first down, Truckee was back within 13-7.

On Fernley’s next drive, a 41-yard pass from McIntyre to Kingston got the Vaqueros to the Truckee 16, but a fumble on the next play killed that drive.

They got another chance when Alonzo intercepted a pass on the very next play with 1:25 left in the half, but Carter thwarted that opportunity with an interception at the Truckee 2 with 8 seconds left in the half.

If the Vaqueros’ opening drive of the game was textbook flexbone, the Wolverine’s first drive to start the second half was vintage Truckee. The Wolverines went 60 yards in 13 plays. A 25-yard pass from Kahl to Carter was the only chunk play, but the Wolverines befuddled the Vaqueros with a variety of running plays, eventually cashing in the drive on a 1-yard score by Lamperti.

On Fernley’s next possession, a 57-yard touchdown run by Kingston was nullified by a penalty. The Vaqueros managed to reach the Truckee 11, but they had to settle for a 29-yard field goal attempt, which was blocked.

On the next play, Parisi found a gaping hole off left tackle and ran 93 yards for a touchdown and a 21-13 lead with 1:48 left in the third quarter.

The teams exchanged fumbles to start the fourth quarter, with Truckee muffing a punt at its own 27, but the Vaqueros giving it right back on a fumbled option pitch.

That led to Truckee’s 65-yard touchdown drive that made it 28-13 and set up the wild fourth quarter.

“We stayed in it,” Kingston said. “Staying focused, staying disciplined, little things, especially against a good Truckee team that does the right things.”