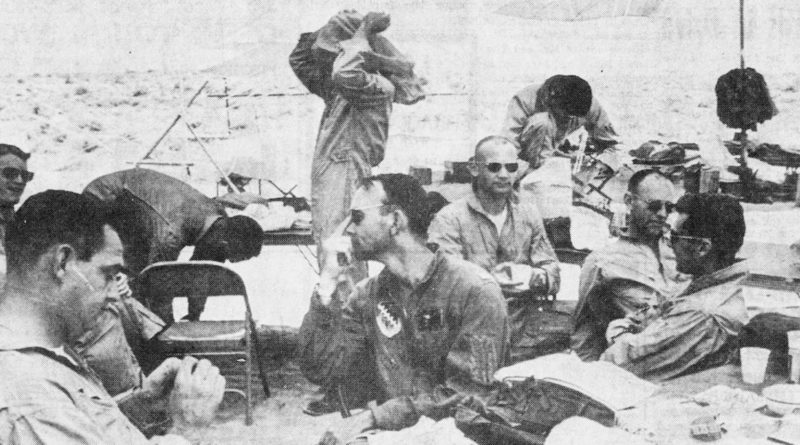 What may have been a storied bootprint from the first man to walk on the moon 50 years ago was preceded five years before the historic landing.

That’s when Neil Armstrong and his Apollo 11 crew of Buzz Aldrin and Michael Collins left their footprints in Churchill County.

The three space pioneers along with 11 other astronauts spent a week in Northern Nevada in August 1964 when they flew to the former Stead Air Force Base north of Reno to undergo classroom instruction in desert survival in the rustic high desert and then spent three days in the hot, dry desert putting to practice what they learned from their U.S. Air Force instructors. Stead AFB provided three phases of desert survival training beginning with the seven Mercury astronauts in 1960 followed three years later with the Gemini crews. Instructors wanted astronauts to cope in case they executed an emergency landing in a desert environment such as the Gobi or Sahara before search and rescue units arrived. The 1964 training would be the final desert survival course at Stead because the survival school was moving to Washington state. Nevada’s weather and unique terrain lent itself, though, to desert training.

“The possibility of an arid-area landing was remote but did exist,” stated a NASA Space Task Group in a Project Mercury status report for the period ending July 31, 1960. “So this training was accomplished to supply the astronauts with the confidence and ability to survive desert conditions until recovery.”

The report added survival equipment normally installed in the spacecraft “was used to provide the most realistic conditions.”

REPORTING TO THE HIGH DESERT

“The astronauts spent two days with these Instructors, then three days and nights in the desert area near Reno,” stated Root. “Master Sgt. Ed Pulvermacher was the lead man for the field instructors who worked with the NASA people in the desert. Academic and field instructors not only taught the NASA astronauts, but evaluated the survival equipment provided in the capsules and were able to inspire NASA to some life-saving changes and additions to their protective equipment inventory.”

Each phase including the third one with Armstrong, a former Navy pilot during the Korean War, and West Point graduates Aldrin and Collins, had astronauts spend their first day and a half in the classroom at Stead. They then boarded helicopters Tuesday afternoon for the half-hour flight east to the Carson Sink situated between the terminus of both the Humboldt and Carson rivers. Due south of the training area was the Naval Auxiliary Air Station.

Before they took their historic flight to the moon aboard Apollo 11, however, their week at Stead AFB and at the desert command post more than 30 miles northeast of Fallon provided them with survival skills they would first need aboard the two-man Gemini spacecraft and later on the Apollo missions.

Armstrong also served as command pilot for Gemini 8 that launched March 16, 1966; Collins blasted off with command pilot John Young later that year on July 18 for their two-day mission on Gemini 10; and Aldrin strapped in aboard Gemini 12, which launched from its Cape Canaveral pad near the end of 1966 on Veterans Day.

Instructors oriented the survival training toward Gemini mission recovery culminating with three days in the desert where astronauts received instruction as a group and then two-man teams were left alone, wrote David J. Shayler, author of “Gemini, Steps to the Moon.” Shayler said astronauts “applied what they had learned from the academic and demonstration phases of the program.”

Shayler also showed the astronauts’ resolve during their survival training. He mentioned that during Young’s phase at the Carson Sink, a scorpion stung the future astronaut on the ankle, but he refused any help from medics and took care of the wound.

LESSONS AT THE CARSON SINK

When the 14 astronauts, two of them civilians, reported for their week in Nevada on Aug. 10, they spent the first day in the classroom and also the following morning. The astronauts, chosen from all branches of military service, received a quick briefing from the instructors on conditions affecting the various deserts throughout the world. The Reno Evening Gazette said the block of instruction included information on the inhabitants who lived in the different desert regions, variations in wildlife and vegetation and climatological conditions.

At midday, helicopters then flew the astronauts and their instructors to a command post in the Carson Sink, whipping up a small dust devil upon landing on a rutty road.

“They spent that afternoon and Wednesday morning in demonstration of the erection of shelters, the improvisation of clothing and signaling equipment,” wrote Colin Burgess, author of “Moon Bound.” “Wednesday afternoon they moved to tow-man sites, spending the next day-and-a-half practicing survival in conditions such as might be encountered if a Gemini capsule were to parachute into a desert region.”

The NASA Roundup newsletter of Aug. 16 reported during the indoctrination phase in the field, the astronauts practiced using flares, hand mirrors and other signal devices. In fact, the astronauts demonstrated they were more than proficient with the hand mirrors.

“During a practice session in the field on Tuesday, the astronauts managed to coax down a high-flying Navy airplane by using hand mirrors,” the Roundup added. “The curious Navy pilot came back in a low pass to see what was going on, then returned the astronaut signals with a blinking light and returned to altitude to resume his course.”

Reno newspaperman Bob Nitsche also accompanied the astronauts on their Tuesday training. He described it as “preservation in the desert is the name of the game” for these astronauts.

Nitsche continued: “Where they’re going on an orbit trip to another planet or to the moon is not important to their instructors. Their return is important. At Stead, they learn desert survival. At other bases, they learn survival in the jungle, seashore, Arctic conditions, etc.”

Like the astronauts before and after them who endured the week of desert survival, the astronauts used their parachutes to create both shelters and then as loose clothing to protect them from the sizzling Nevada sun. Temperatures during that week ranged into the mid to high 90s with morning lows hovering near 60. Surface temperatures baked the desert from 140 to 150 degrees. Judging by photographs taken during the week, each astronaut appeared to revel as a modern-day Lawrence of Arabia with his new, orange and white protective clothing.

“Following instruction in cutting a parachute properly, a lesson in making clothing from some of the pieces was given and the men then practice for themselves.

“They had no trouble making loose garments and burnooses amid such comments as, ’This is about the right size. I lucked out.’ and ‘If you get any cuter, you’re in trouble.’”

Later in the day, he said the astronauts used free time to read the popular classics of the time such as William Faulkner’s “Soldier’s Pay” and “To Kill a Mockingbird.”

Their final day of survival training ended on Aug. 14, a Friday.

“They prepared the astronauts to locate their capsule containing food, water and signaling equipment in the event of ejecting from it and landing during their personal parachutes,” Burgess added.

Midway through the course on Wednesday afternoon, the 14 men tested their classroom knowledge in the desert. Divided into tandems, the astronauts carried no food and only four pounds of water. Instructors expected the astronauts to live off the land.

“They ate only what they could find and catch in the desert,” reported the NASA Roundup. “No food was issued with the survival kits.”

Once the course ended on the fifth day, U.S. Air Force helicopters ferried the teams back to Stead AFB for review and critique and to hold a news conference. Aldrin, who was a U.S. Air Force major, said the group could likely produce the first man to walk on the moon.

“We like to feel it’s highly probable,” Aldrin said.

Deke Slayton, one of the original NASA Mercury Seven astronauts and NASA’s first chief of the Astronaut Office and director of Flight Crew Operations, gave an assessment of the overall desert-survival training and its importance for the astronauts in his report.

“Here again, we learned how to protect ourselves from the sun: how to utilize the limited water supply, and to build clothing and shelter from our parachutes,” wrote Slayton, a World War II pilot who flew the B-25 Mitchell medium bomber. “There is a remote possibility that we could impact in the west African desert, should our orbital insertion be somewhat under speed and our retrorockets not have adequate thrust. This possibility is very remote, but it is an indication of our attempt to train for any possibility, no matter how remote.”

The Department of Defense decided in 1964 to relocate the survival school to Fairchild AFB near Spokane, Wash., and by mid-1966, silence fell on Stead AFB for the first time since World War II ended. While desert survival training ended for the astronauts, the military still relied on the desert for search and rescue units to look for downed pilots.

In the 1990s and early 2000s, the Navy conducted search and rescue exercises in the northern half of Dixie Valley northeast of Fallon with the Marines and Nevada Army National Guard units.

Hot, dusty and dry characterized the summer days for the joint training exercises.

Steve Endacott of Fallon, a U.S. Naval Academy graduate who retired in 1994, was qualified as an F/A-18 Hornet pilot and served in a variety of positions during his career. After retiring, he provided facilitator training to the military instructor corps at the Naval Aviation Warfighting Development Center (formerly Naval Strike and Air Warfare Center).

Endacott said periodically an air crew in Fallon for training would head to the desert and simulate search and rescue. He said pilots would pop smoke bombs or use signal devices to aide in their recovery. A major noncombatant evacuation exercise became part of Desert Rescue. Endacott said it was a search and rescue training exercise involving Navy, Army, Air Force and Marine personnel and conducted on NAS Fallon ranges.

“It was two to three weeks and consisted a series of combat exercises,” Endacott said. “We took advantage of the SAR integration, the air space, jets, helicopter and SAMs (surface to air missiles).”

Although the survival training at the Carson Sink for astronauts is nothing but a distant memory, the desert has its own rustic beauty with windswept images, small sand dunes and silhouetted mountains cast with an early morning blue hue.

Paul McFarlane, director of the Fleischmann Planetarium at the University of Nevada, Reno, said space exploration has been an integral part of Nevada for decades. In addition to the desert survival training, he said Rocketdyne had an operation north of Sparks and east of the Pyramid Highway to test engines and thrusters used on both the Gemini and Apollo spacecrafts and the space shuttle.

“A number of astronauts would stay in Reno and go out there,” McFarlane said. “They were interested in the testing of engines.”

Yet, it also may be the desert that the astronauts remember, especially Armstrong. His experience in the desolate Carson Sink created a lasting impression for the Ohio native when he communicated his first description of the moon back to the mission control center in Houston.

“Everything around me is different. It has a stark beauty all of its own and like much of the high desert of the United States, it’s different, but it’s very pretty out here.”