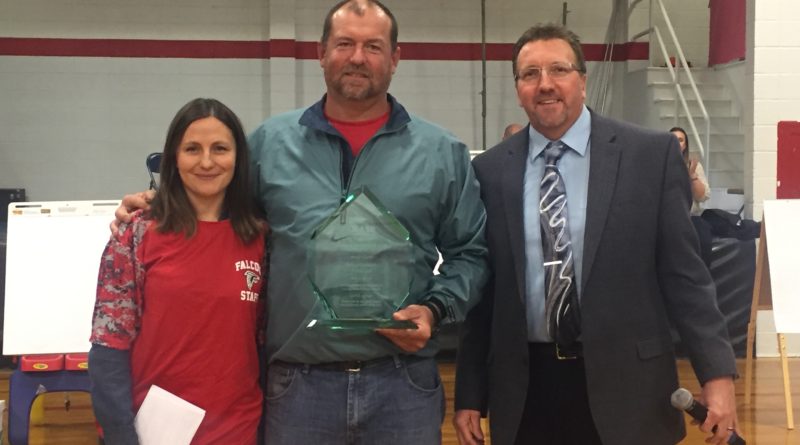 Fernley Intermediate School principal Rob Jacobson was named the Administrator of the Year at the Nevada Association of School Boards Annual Conference on Saturday, November 19.

In addition, C.J. Fields of Dayton High School received the Innovative Teacher of the Year award.

Jacobson attended Hamline University and graduated with a degree in Elementary Education. He later received his Masters in Education from the University of Phoenix in 2001.

Some of the unique events Jacobson incorporates at Fernley Intermediate School include a 9/11 memorial assembly in September to honor first responders, a Veterans Day assembly in November honoring hundreds of local veterans, and a Special Olympics event in May where more than 500 students from all over Northern Nevada participate in a variety of games and receive recognition, making it a great day for these students.

These include bringing all of his 580 students into the gym where Jacobson and his dean of students talk to the student body about the benefits of working hard, being good citizens, helping others, celebrating successes, and always doing their best. These meetings also provide additional collaboration time for his staff and are an example of Jacobson’s focus on serving his students beyond the test scores and supporting his staff beyond the minimum requirements of the negotiated agreement.

Rob Jacobson was nominated by the Lyon County School District Board of Trustees, the following is from

Rob Jacobson has been principal of Fernley Intermediate School for 5 years. He has been a part of Lyon County School District for the past 26 years. His consistent and focused work has resulted in a steady increase in student achievement, as measured by recent SBAC test results, NWEA Measure of Academic Progress (MAP) tests and district assessments. In addition to his instructional leadership, Mr. Jacobson continues to be a positive influence in the Fernley community. He has built community relationships and continues to host several unique community events each year. Rob’s involvement in the Fernley community is evident when you walk on our campus. He seems to know the brothers, sisters, parents, grandparents, and cousins of almost all of our students. These connections build trust between Rob and the students.

As part of his nomination, two staff members who work closely with Jacobson offered their insight:

As a mentor Rob has shown me the importance of clear and effective communication, going above and beyond expectations, being visible and willing to jump into roles when needed. He is definitely a kids-first leader and supports his staff professionally and personally. Rob is true in his convictions and separates his personal from professional relationships. FIS is home to a CLS program. Rob builds strong and trusting relationships with those CLS students. He has gone as far as providing dog treats for a student’s pet and he has played a game or two of cribbage with some students, as well. Rob finds ways to connect with staff, students, and parents. His involvement in the Fernley community is evident when you walk on our campus. Rob seems to know the brothers, sisters, parents, grandparents, and cousins of almost all of our students. He uses these connections to build trust between himself and the students.

The rapport Mr. Jacobson has with families and students is huge in terms of his success as an outstanding school leader. He’s transparent with everyone, and is quick to admit if he makes a mistake. Also, students are excited to share their successes and frequently visit his office. Rob will immediately call the parent with the student and celebrate their successes. He is always willing to give away his personal cell phone number to any parent or student. I can’t imagine what it would be like without Rob around here.

In addition, Fields works very closely with the government agency of Vocational Rehab to place his students in a working environment in the community. Some of these placements include pizza places, dollar stores, grocery stores, garden centers, libraries, veterinarian hospitals, and mechanic shops. He finds the interest of the student and then works hard to place them. Some of the jobs have then turned into full time employment for the students. The community businesses have embraced the program and share in the effort to raise the students in the community.

Fields has also decided to pursue his PhD in Special Education with an emphasis on school-to-work transition, community integration, and disability advocacy.

C.J. Fields was nominated by the Lyon County School District Board of Trustees, the following is from

C.J. Fields serves Lyon County’s special needs children in a Comprehensive Life Skills (CLS) class and has made a huge, positive difference in each of their lives. From a program struggling to find focus, C.J. developed a transitional program for his students that prepares them for becoming employed adults within the community. Each student in his class learns necessary skills required for employment. These skills are put into practice in a business started by the students at the school. C.J. works to find the interest of each student and works very closely with Vocational Rehab to place each student in an environment he/she will enjoy and find success. C.J. was asked to present his program to the Nevada Department of Education Mega Conference. He currently teaches a class on post-secondary transition at UNR to prospective special education teachers. He serves on multiple committees at the school and District level. He trains others in creating well-written IEPs, how to collect data on these IEPs, and how to move students along in their growth and progress.

One thought on “FIS principal Jacobson named Administrator of the Year”