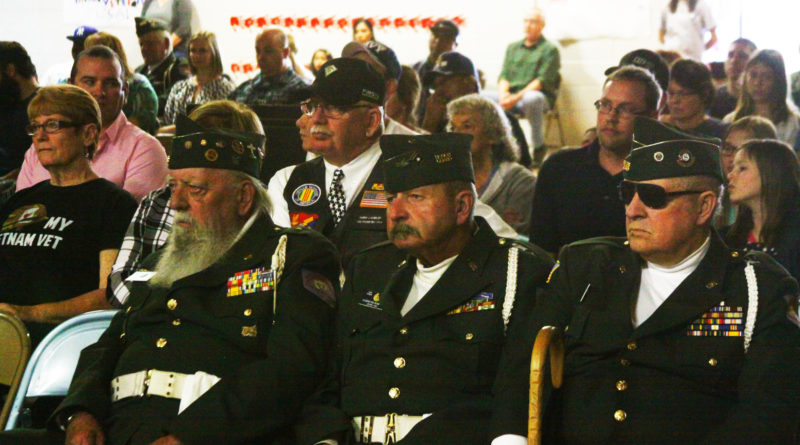 Jessie Stigi was first exposed to the military as a child on a field trip to the United States Naval Academy in Annapolis, Md., and immediately she knew what she wanted to be when she grew up.

Now a Lt. Commander in the U.S. Navy, she graduated from the Naval Academy in 2003 and served 11 years active duty, and as a reservist for the past three.

She was one of the keynote speakers at last Thursday’s Veterans Day Assembly at Fernley Intermediate School, where the students gathered to honor veterans and pay tribute to them for their sacrifices for our country.

Students lined the sidewalk from the parking lot to the gymnasium, waving flags and slapping hands with the 53 veterans who attended the ceremony.

After graduating from the Academy, Stigi attended flight school in Pensacola, Fla. and served as a pilot in Iraq protecting ground troops.

“Thank you veterans and all that have gone before me, and to the women in military, thank you for the road you paved that allowed me to fly jets,” Stigi said. “I’m thankful and proud to serve our country.”

Air Force Capt. Eric Christensen, a pilot from the Air National Guard in Stead who flies C-130, served in Afghanistan and Kuwait.

He served as the other keynote speaker, discussing why freedom is so important and how to honor veterans.

“Freedom lets you be you, and when you are your best, you can do great things,” Christensen said.

Christensen said his father, who served for 22 years and was a veteran of the Korean and Vietnam Wars, flew the U.S. flag on their house, on a pole and along fences around their yard.

He said flying and honoring the flag is one way to honor and thank veterans.