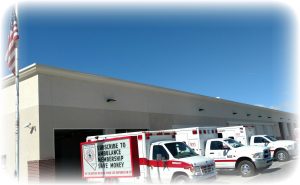 Through the first 208 days of 2020, North Lyon County Fire Protection District emergency crews had responded to 1,535 individual medical calls, an average of more than seven per day.

Of those, 173, or 11.27 percent, were related to falls, the most common single reason Fernley residents call an ambulance.

“It’s our number one call for service,” Nicholl said. “We’re going to have to try to make an impact in reducing that.”

Nationally, an average of one out of five falls causes a serious injury, such as a broken bone or head injury, but that rate increases significantly among people 65 years of age and older. Considering that 27 percent of the district’s patients are 70 years old or more, and that percentage goes up to 38.27 percent over the age of 60, District Fire Chief Jason Nicholl said it’s clear the District has to do something to prevent as many falls as possible.

“It’s one of the leading causes of death and disability for the vulnerable populations of seniors,” Nicholl said. “We have significant senior population, but I was startled to see that calls for service for falls was so large.”

In one home, where rescue crews have been called between six and 10 times, the District is installing secure grab bars for the residents. While acknowledging they can’t do that for everyone, Nicholl said the District will focus on awareness and prevention to try to reduce the number of people who are injured in falls. He said the District is going to research national anti-fall campaigns and adopt one of them, to try to raise awareness and safety in the homes of people who are vulnerable to falls.

“it’s about the safety of the community and quality of life,” Nicholl said. “That’s our motto, ‘People first,’ and I’d say that’s how we can put people first.”