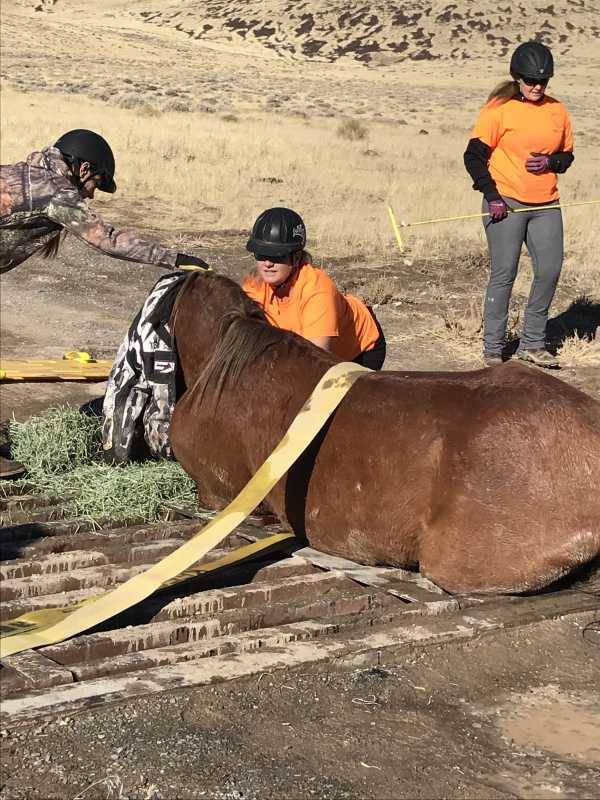 The rescue group and fire districts responded to the call in the area of Damon’s Curve, north of Silver Springs, on U.S. 95A Saturday after the NHP discovered a rather stout Virginia Range stallion with all four legs stuck fast in a cattle guard. The state trained volunteers, part of the collaboration of groups that help manage the Virginia Range horses and respond to livestock incidents on area highways, spearheaded the effort.

“These calls are extremely tricky as the responders have to operate in close contact with the animals,” said wild horse advocate Willis Lamm. “One miscalculation can result in the animal breaking a leg.

When the volunteers arrived, they found the shores with all four legs in the cattle guard. A citizen familiar with horses placed a jacket over the stallion’s head to help keep him quiet while the volunteers were caching out gear nearby.

“Cattle guard rescues are my worst nightmare,” Lamm said. “You have to work up close in a dangerous situation. One wrong move and someone gets hurt or the horse breaks a leg and has to be put down.”

The volunteers used pry bars to free the hooves. After getting two legs out, they slid a slip sheet under them to keep them from dropping through again, and tied it to the cattle guard so the horse couldn’t accidentally kick it out of the way. The horse was rolled slightly using the recovery strap to help take the load off his legs.

The horse’s hind leg was wedged tight between the top metal strap and a T-place under the grate. Volunteers were unable to break the welds with Hurst jaws, so they decided to get the front leg free first.

“The risk was that the horse might try to get up and snap his hind leg,” Lamm said. “We maintained control of the front legs with webbing and finally was able to reposition the horse just enough to pry his hind hoof free.”

After freeing the horse, the volunteers dragged him clear of the grate, released the Becker sling strap, then methodically released each foreleg, head control and the jacket that was used as a blinder.

After about a minute the horse simply got up and trotted away to join the other range horses.

“Big thanks to North Lyon County and Central Lyon County fire crews who came to assist and provided cool, clear-headed assistance with a type of call that isn’t that common for them,” Lamm said. “The call was near the border of both districts and they didn’t worry about whose area of responsibility it was. These guys just get the job done.”