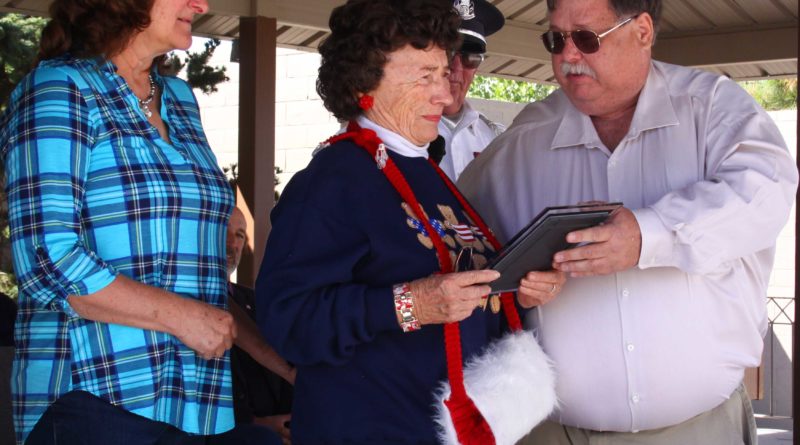 Brush named Patriot of the Year

The terrorist attacks of Sept. 11, 2001, as with a host of other tragedies throughout United States history, has left Americans with physical and emotional scars.

But, it’s how we deal with those tragedies, and the scars, that define us, North Lyon County Fire Protection District chief Jason Nicholl told a crowd of a few dozen at the annual Fernley 9/11 Memorial Ceremony last Wednesday at the Out of Town Park.

Nicholl told of being a young firefighter/paramedic on Sept. 11, 2001. He responded to a medical emergency that morning, transporting an elderly woman to the emergency room at the University of Utah Medical Center. As rescue workers wheeled the woman into the emergency room, Nicholl said the place was in a standstill with doctors, nurses, firefighters, EMS workers, police officers and others intently watching events unfold on television. Nicholl said they wheeled their patient into the emergency room and looked at a television just in time to see the second plane hit the tower at the World Trade Center.

“I was pretty weepy, and she put her hand on my shoulder and she said, ‘This is your Pearl Harbor,’” Nicholl said.

The fire chief said he also recalls the days and months after the attacks.

“Do you remember that community, that sense of purpose that we all shared?” Nicholl asked the crowd. “We were no longer 300 million individuals. We were one.”

But that unity has given way to divisiveness, and separation, Nicholl said, whether it be because of gender, occupations, poverty, political, affiliation or religion.

“So I ask you, I beg you, I implore, take some time today and think back to how you felt in the two or three months after Sept. 11,” Nicholl said. “Recapture the unity of purpose that we carried like a badge of pride for the whole world to see. Serve your community. Reach out. Dig deep into our own existence and give a brother a hand. Help a sister when they’re in need. Don’t let apathy become the condemnation of the whole potential that we have.”

Brush has spent her life embodying the things Nicholl was calling for.

Brush, whose family bought a ranch in Fernley in 1948, taught in Fernley schools for 27 years, starting her career teaching music and remedial reading at Fernley Elementary in 1969. She taught kindergarten for the last few years of her career, and throughout her adult life, has been active in many groups, activities and classes, bettering the community and her neighborhood.

“She helped inspire the kids with a sense of appreciation for our country and for learning its history, and enriching the lives of those she meets,” said Dr. Connie Antone-Knoll, who announced Brush’s selection as Patriot of the Year.

The award was presented to brush by Mayor Roy Edgington and her daughter Arleen.

“I’m so honored and speechless,” Brush said. “There’s so many people in this community that do their all to make our community a better place. It takes all of us.”