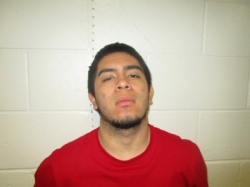 The last suspect in a fatal shooting in Dayton in May has been arrested.

Friday night the Tri-County Gang Unit along with the Carson City Sheriff’s Office arrested Jonathon “Johnny” Ortiz, 16 of Carson City, in connected with the shooting death of Joseph Jarratt in Dayton.

Based on a tip that Ortiz was in the Carson City area, deputies were able to establish his location. At approximately 11:30 p.m. he was arrested after a brief foot pursuit, and booked into the Carson City Detention Center.

On the evening of May 7, 2018 the Lyon County Sheriff’s Office responded to a shots fired call in the shopping center parking lot on Pine Cone Road in Dayton. Arriving deputies found Jarratt with multiple gunshot wounds. He was pronounced dead on the scene.

Other arrests that have been made in connection with Jarratt’s death include: Tieler Ash Frayo, 17 of Dayton; Malik Amir Avila, 17 of Gardnerville; Jordan Andrus, 17 of Carson City; and Kane Wallace, 17 of Carson City. These four suspects are currently held in the Lyon County Detention Center.