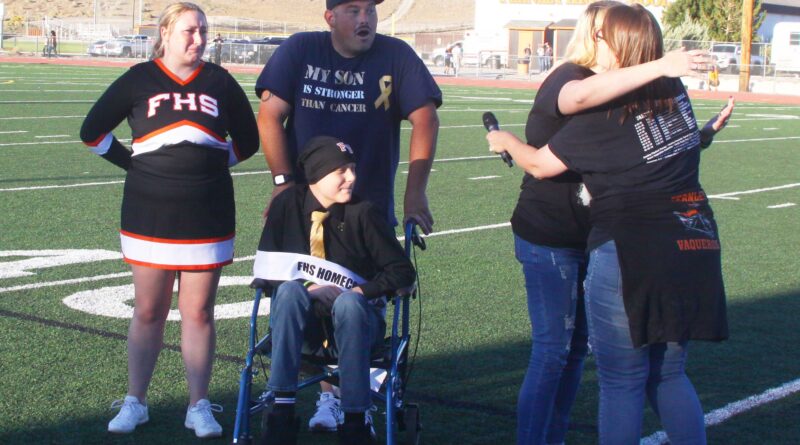 Jeremy Haumann grew up and went to school in Fernley, so he knows very well how the community can rally around one of its own when help is needed. But that didn’t stop him from feeling amazed when the family the Fernley High School community rallied around was his.

During halftime of the boys soccer game last Friday, FHS teacher Jackie Kingston announced to a large Homecoming crowd that the school had raised $11,500 for this year’s Homecoming Hero, Kamrin Allen, a figure that has since grown to more than $13,000. The money was raised through a variety of fundraisers with local businesses during Homecoming week, and with a donation bucket that was passed round at all Fernley schools.

After Kingston’s announcement at the soccer game, even the referee came over to add his contribution.

His parents, Jeremy and Danielle Haumann, were touched and humbled by the response.

“I’m from Fernley I went to high school here, and just the sense of community, everybody coming together, it’s just amazing,” Jeremy Haumann said.

Kamrin, an eighth grade student at Silverland Middle School, was diagnosed April 8 with Burkitt lymphoma. He has undergone six rounds of chemotherapy and has lost the ability to walk. He has also had more than 16 procedures, 26 blood transfusions, about 21 platelet transfusions, four feeding tubes, kidney drains and stents and 15 spinals.

Jeremy Haumann said the next thing for Kamrin is to go back for a scan after his last treatment for evaluation.

“I never thought this in a million years, and it all happened so quick, too,” he said. “Now we’re just, ‘wow.’”

“We’re so thankful and appreciative of it,” Haumann said. “We’ve had a very hard time, but things are getting better. We’re on the up and up now.”