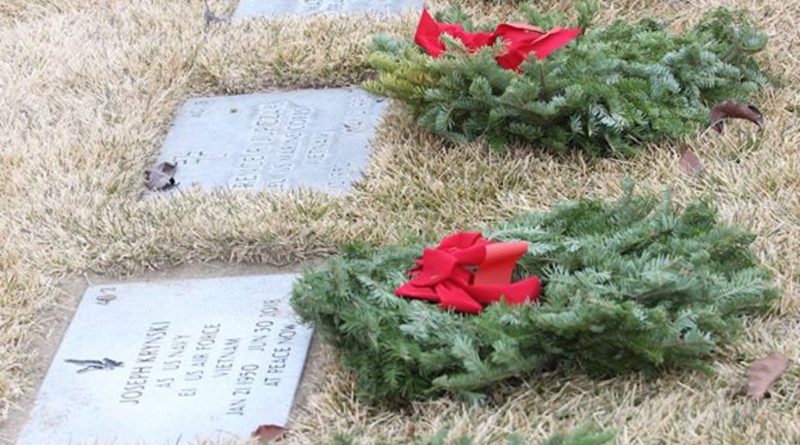 Their mission is almost complete.

The Nevada Veterans Coalition’s drive to receive donations to place a wreath at every veteran’s gravesite at the Northern Nevada Veterans Memorial Cemetery has been called successful, said NVC spokesman Tom Draughon.

“It’s looking good at 100 percent,” Draughon said. “Tentatively, we’ll get our first load of wreaths on Friday at 10 a.m., and the second load sometime after that.”

Normally held on the third Saturday of December, this year’s Wreaths Across America remembrance has advanced one weekend because of the Christmas holiday. Draughon said the program begins at 9 a.m., but he encourages people who are attending the event to arrive no later than 8:30 a.m. because of parking and walking distances. The remembrance service begins at the same time to coincide with the ceremony at noon at the Arlington National Ceremony near Washington, D.C. Draughon said his remarks will be the same as those read at other locations.

Draughon said volunteers will also mark gravesites this week for specifically designated wreaths, which have been purchased by either family or friends, for deceased veterans.

The state veterans’ cemetery, along with other cemeteries around the world that have interred thousands of U.S. veterans, will conduct its annual Wreaths Across America remembrance on Saturday in what has become the second largest event of the year to honor deceased military personnel. The NNVMC is the final resting spot for more than 8,700 veterans. The only state veterans’ cemeteries are located in Fernley and Boulder City.

Draughon said wreaths are placed at each veteran’s headstone or along the columbarium after the opening remembrance through the work of organizations and the public who wish to attend. Every year, about 1,400 people attend the one-hour ceremony, about half of house who come to the NNVMC for Memorial Day. He added guests must dress warmly since Saturday’s weather forecast is calling for highs in the lower 40s and a chance of snow showers.

“This is a chance to remember veterans before Christmas,” Draughon said, adding these days have become special for the families as they look recall the holidays with their loved ones.

Draughon said Wreaths Across America is also for a day for children to learn more about veterans who left them a free society in which to live.

Volunteers from Naval Air Station Fallon, the Nevada National Guard, U.S. Naval Sea Cadet Corps and the Civil Air Patrol assist the NVC during the ceremony and with the placement of wreaths. A cadet from one of the two youth groups accompanies a veteran from a branch of service that’s being recognized, and then helps with the placement of a remembrance wreath at a medallion near the pavilion.

A similar program for Fallon begins at noon at Churchill County’s cemetery east of Fallon. By staggering the times, organizer Lisa Devall said guests and volunteers are able to attend both remembrances. The Fallon service will be conducted between two white buildings located at the northern end of the cemetery. The cemetery is the final resting place for 1,300 veterans.

Fallon organizer Lisa Devall, who said the cemetery is below its goal to have wreaths for every gravesite, has been flagging headstones so visitors will know the location of each veteran’s gravesite. She said flags will mark the placement for the wreaths.

Volunteers are also needed, and may email Devall at ldevalllily@yahoo.com.