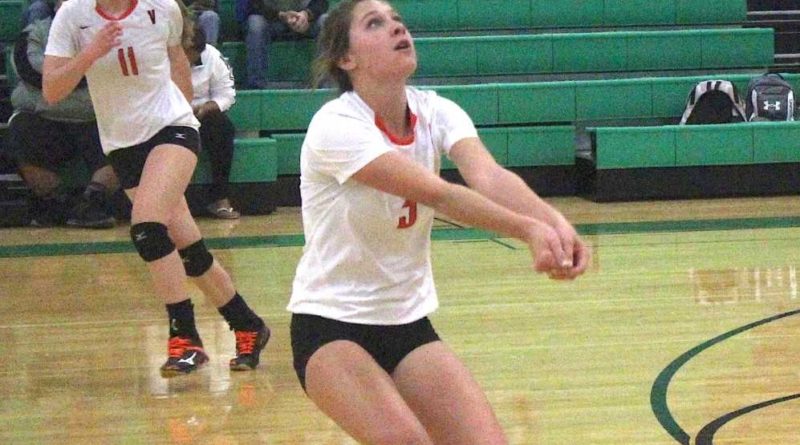 Fernley’s volleyball team rolled into Fallon Wednesday and swept the Lady Wave in three sets at the Elmo Derrico Gym, yet both teams engaged in a hard-fought, spirited Northern 3A match that “went down to the wire” in each game.

Timely hitting, exciting rallies and heads-up play at the net heated up the rival match between two longtime foes as Fernley rallied in each set to wrestle a win from the young, but improving Greenwave, 4-11 overall, 2-5 in league. Fernley, which sits on top of the Northern 3A, improves to 12-4 and 6-1 in league took the three sets 25-21, 28-26 and 25-19.

Fernley coach Dave Trujillo said the Vaqueros struggled in the match but attributed some of their tiredness to last week’s homecoming week.

“We’ll get back together and get them ready for Saturday,” he said.

“The girls played well at the net,” she said. “Our goal is to get better, and we can put ourselves in a position to make regionals. Fernley is no. 1. Those were hard-fought sets and tonight it could have been anyone’s game … neither team dominated tonight.”

Pumped up and ready to play in the first set, the Wave grabbed a quick 5-1 lead on Elizabeth Williams’ return down the left side and Fernley’s four forced errors.

The Vaqueros, though, settled down and eventually tied the set at 6. Brittney Gaitan positioned herself for a kill, while teammate Katelyn Garnett had a block at the net and also responded with a soft, two-handed return to tie the score.

Fernley rolled on a 6-2 run by controlling the middle with another block form Garnett and a kill from Celeste Condie. Neither team could sustain momentum midway through the set until Fallon’s Macie Anderson gave the Wave consistency from her serving.

The Greenwave senior recorded two key aces, and Kinsli Rogne made two blocks as Fallon sliced the led to 18-17.

Down the final stretch, both teams committed numerous forced errors, but Fernley had several kills from Garnett and Colby Johnson, while the Wave’s Karlee Hitchcock nailed a kill.

As with the first set, Fallon scored the first point and padded its lead by as many as five points due to the visitor’s long returns that either sailed past the line or serves into the net. Fernley regrouped and tied the match at 9 behind Garnett’s four service points.

Fernley gradually pulled away from the Wave with Raye Arroyo freezing the Fallon defense with a pair of kills, and Garnett adding another.

Although Fernley committed several mistakes, Fallon was still unable to make a dent against the Vaqueros. Arroyo notched three more kills before Fallon made a move with Fernley up 24-21.

Hitchcock’s block tied the set, and Shelbi Schultz then made a crucial block against Arroyo’s kill attempt. Schultz followed with an ace to give Fallon a 25-24 lead.

Each team traded points before Fernley made the final two on a hard serve Fallon couldn’t return and another when Garnett returned the ball down the middle, and no Fallon player could reach it.

“My girls have a lot of fight, and I love their competitive nature,” Trujillo said. “I am very proud they fight in every game, and so far, we have been on the positive end.”

Each team traded points to open the third set with neither team gaining control over the other.

Fallon took a 4-2 lead but Gaitan stepped up to serve and gave Fernley the lead with two aces and two forced Greenwave errors on the return.

Jordan Beyer, who played a respectable match at the net and caught the Vaqueros off-guard several times, had a soft block at the net and led Fallon with a good volley to tie the set at 9.

Daum said Beyer and all the Fallon players had a good match against Fernley.

“Jordan has a lot of natural athleticism, and she is coming around and improving,” Daum added.

Four straight Fernley errors gave Fallon some momentum in leading 13-10, but Fallon returned two balls into the net and couldn’t handle a serve to allow Fernley to tie again, 13-13 with Arroyo serving.

The lead changed three more times, the last when both teams were knotted at 16.

The Vaqueros wrapped up the set on a 9-3 run. Arroyo turned up the heat on her returns with three kills, but another hard shot cruised into the net.

“We get senior leadership, and she (Arroyo) does lead our team and does a great job,” Trujillo added.

“This is the best we have played in the last three games,” Daum said. “We played competitively but we also had inopportune errors.”

Daum said she made some “serious changes” in the lineup, but the aim is to make the players better and ready for the second half of the season, which begins at home on Wednesday against Sparks.