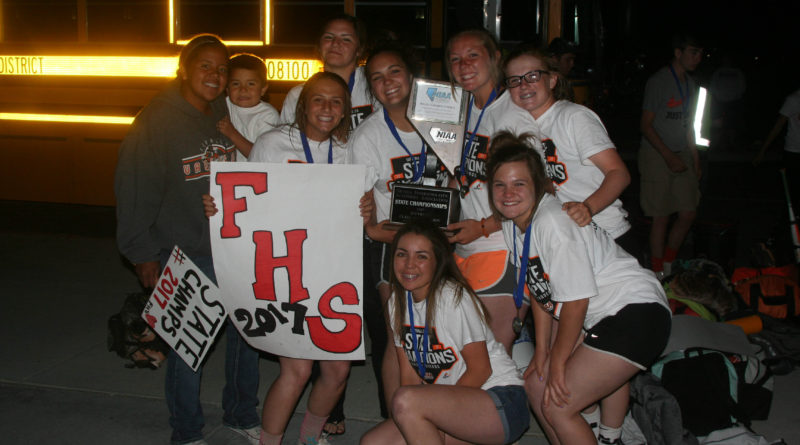 Three years in a row, the Fernley High School softball team had its season end with a loss to Fallon in the State tournament.

Saturday, the Vaqueros returned the favor.

After losing their last six meetings with Fallon, including an elimination game in last year’s state tournament and the first five meetings this season, the Vaqueros defeated Fernley twice last week, including a 3-0 shutout in the championship game, to claim their first state championship since 2013.

In so doing, the Vaqueros also kept alive a streak that each incoming class in the last 10 years has won at least one state championship during their careers.

“It felt really amazing because we’ve been on the short end the last two years,” said senior Brooke Chapin.

Chapin was a sophomore on the 2015 team that had won the regular season and regional championships, only to lose to Fallon in the state championship game. She made sure to tell that story to her younger teammates.

“I told them what happened to us, and that it was our turn to do that to them,” Chapin said.

Sophomore McKenna Montgomery provided the key blow that made it possible.

Trailing 4-0 in the top of the sixth inning of Friday’s winner’s bracket game, the Vaqueros put together a two-out rally and had runners on first and second with one run in when Montgomery came to the plate.

“I was thinking she was one who could put one over,” coach Diane Chapin said.

That’s exactly what she did. Montgomery blasted a shot over the center field fence to tie the game 4-4.

Montgomery said she had no doubt when she connected that it was a home run.

Diane Chapin agreed, but was taking no chances.

The Vaqueros followed up with consecutive doubles to take a 5-4 lead.

“We were all just so happy, it changed our mood of the game,” Brooke Chapin said. “After that it made us relax and took the weight off.”

Montgomery, who had started the game as the pitcher, then been relieved by Macie Kirk in the fifth inning, returned to the pitcher’s circle for the seventh inning to close out the game.

“It was great knowing was doing my job on the mound,” Montgomery said.

The Vaqueros never gave them a chance.

Montgomery tossed a one-hit shutout, and the more confident Vaqueros pushed across one run in the fourth inning and two in the sixth.

“We heard the Fallon coach in their huddle say the first team to score would win the game, and we were like no, we’re scoring first, and we did,” Brooke Chapin said.

Montgomery and Chapin both said the seeds of the wins in the state tournament were planted when the Vaqueros lost 3-2 in the regional championship game the week earlier. Fallon had beaten Fernley 15-0 the day before, but Fernley led 2-1 until Fallon hit consecutive home runs in the bottom of the sixth inning.

“We knew we could beat them after that,” Montgomery said.

Following the win, the Vaqueros celebrated by going zip lining on Fremont Street before boarding the bus to return home. Montgomery described the bus ride home as an eight-hour party.

“Oh yeah, with a couple of naps in between,” she said.

Brooke Chapin said it all seemed surreal, until the team got back to Fernley. As the team bus approached the city, it was met near the roundabout on U.S. 50A by a fire truck and police cars, and given an escort through town. Giddy fans lined up along Main St. and 95A, and many of them followed the bus to the school to greet the team.

“When we saw all the people together from the community, it hit everyone that we were state champions,” Brooke Chapin said.