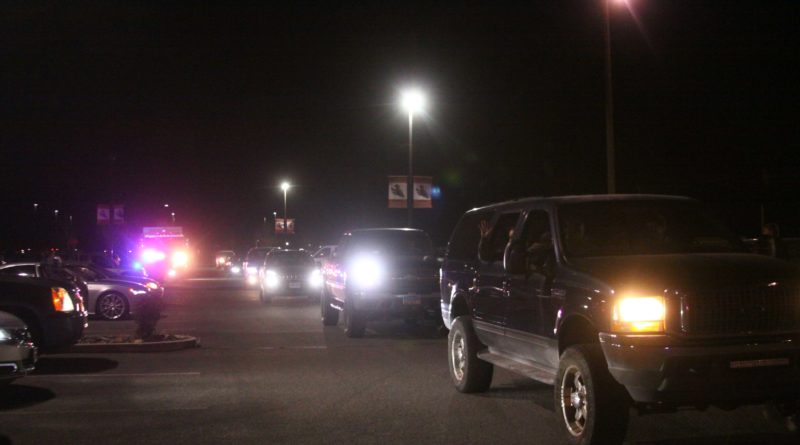 For one night, at least, the Friday night lights were back on at Fernley High School.

A parade of vehicles driving past the lit-up Fernley High school football field with their horns honking lasted more than 10 minutes as Fernley residents turned out to take part in “Be the Light” to honor the Class of 2020, the spring sport athletes who may end up losing their season, first responders and the community in the midst of the COVID-19 outbreak.

“I think it’s just to show the students that we still support them, we’re still here for them and we’re kind of all going through this process as they are too,” said FHS Booster Club president and leadership teacher Jackie Kingston.

When those lights will be back on for competition, on the fields, courts and other facilities is still very much in the air. Lyon County School District superintendent Wayne Workman said in a message to students and parents last week that students should be prepared to return to school the first week of May, but that alternative preparations are also being made.

The Nevada Interscholastic Activities Association has been putting together contingency plans for competition if schools go back into session sometime around May 1. If schools reopen, the NIAA’s plan would be to begin competition on May 7 or 8 for a truncated league season, followed by a regional tournament. Even if seasons resume, there will be no state tournament competition.

Meanwhile, the seniors in the Class of 2020 are unsure whether they will finish the school year on line or back in the classrooms, whether their prep sports careers and other activities are over, and if they will even be able to have a graduation.

“We’ve had an amazing school year here so far, and we just want to keep that going,” Kingston said. “We’re hoping that we can eventually come back together and possibly maybe still hold a graduation. We want them to know that we’re here, that we’re thinking about them.”