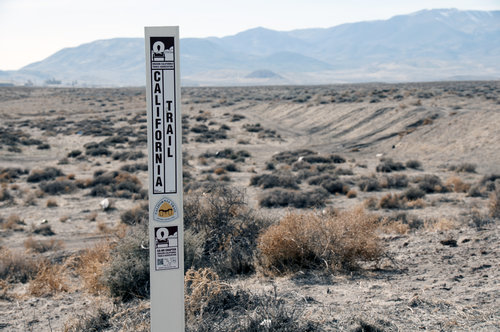 The Fernley Swales– the emigrant trail to California and original transcontinental railroad passing a mile north of Fernley– is on this year’s list of Nevada’s most endangered historic places.

Settlers traveling west in the mid-nineteenth century–especially the Stevens-Townsend-Murphy party of 1844, the Donner Party in 1846, and the gold seekers of 1849–crossed Nevada in their wagons, leaving depressions in the soil. Those near Fernley, in the last seven miles of the Forty-Mile Desert (an area between the Humboldt and Carson Rivers that had no water and became legendary on the trail), became known as the Fernley Swales and are still there.

Volunteers from the Oregon California Trail Association have installed signs. The land cannot be developed, but the Swales face threats from off-road vehicles and a nearby shooting range.

The Fernley Swales serve as a reminder of Nevada’s early history and its importance to those going West.

Former Governor and U.S. Senator Richard Bryan, chairman of the non-profit group Preserve Nevada, said “Nevada has a rich hertage … We have an obligation to preserve it.”