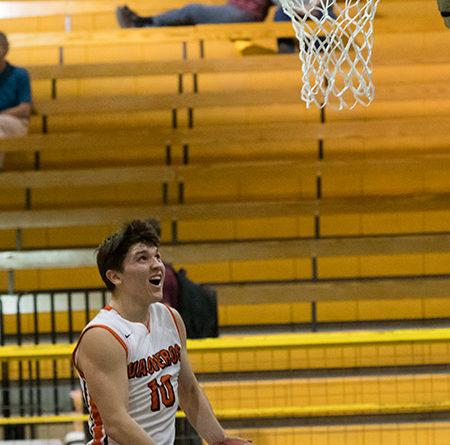 The Fernley High School boys basketball team is going to the State Tournament.

The Vaqueros defeated South Tahoe 69-53 Friday night in a semifinal game of the Northern 3A Regional Tournament at the Winnemucca Events Center. They advance to tomorrow’s championship game, to be played at 5 p.m., and earn a berth in next week’s 3A State Tournament, at the Cox Pavilion on the campus of UNLV.

Fernley’s last appearance in the State Tournament was in 2012.

Fernley led throughout, but South Tahoe put together a run to get within 10 in the fourth quarter. Howe responded with back-to-back 3-pointers to push the lead back to 16, and Fernley cruised the rest of the way.

South Tahoe had beaten Fernley twice during the regular season, but in the second meeting, a 64-61 game in Fernley on Jan. 27, the Vaqueros were in position to win late before making several mistakes. Howe also didn’t score in that game, and Miller said he knew that getting production from Howe could be the difference in the playoff matchup.

“As coach, there’s not going to be a team that beats us three times,” Miller said. “We’re playing better as a team. We’re peaking at the right time and the kids are confident in themselves and in each other.”

In addition to reaching the regional championship and state tournament, the win also was Fernley’s 20th of the season, giving the team three of its goals.

The only negative for the Vaqueros was that Justin Turner rolled his ankle and sat out most of the second half, but Miller is hoping will be able to play tomorrow.

“But if not, other kids will step up,” he said. “Our kids have worked hard, over the summer we played a lot of basketball and it’s paying off. Now we’ll move on and see if we can win the whole thing tomorrow.”