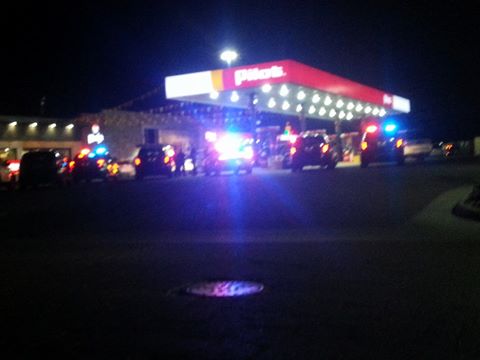 A Fernley man was arrested early Wednesday morning after a chase through town ended with an officer-involved shooting at the Pilot Travel Center.

Jeremy Random, 39, was arrested after he was treated and released from the hospital following the incident.

KTVN reported that the Lyon County Sheriff’s Office said deputies tried to stop a speeding vehicle on a residential road with no headlights at about 10:45 p.m. Tuesday. They charge that the vehicle failed to stop, but deputies didn’t pursue for public safety reasons as the vehicle entered a high traffic area,

About 30 minutes later, the Nevada Highway Patrol contacted LCSO about an erratic driver near Taco Bell. Deputies located the vehicle, but it again failed to stop. Deputies gave pursuit and intentionally struck the vehicle with their patrol cars to stop it

Once the vehicle as stopped, deputies charged that the man showed a weapon, then drove his car at two deputies, who then fired at the suspect.

Random was transported to a Reno hospital by North Lyon County Fire Protection District ambulance, and then after being released, he was booked into the Lyon County Jail on charged of felony eluding and assault on a peace officer with a deadly weapon. His bail was set at $70,000.

One thought on “Fernley man arrested after deputy-involved shooting”