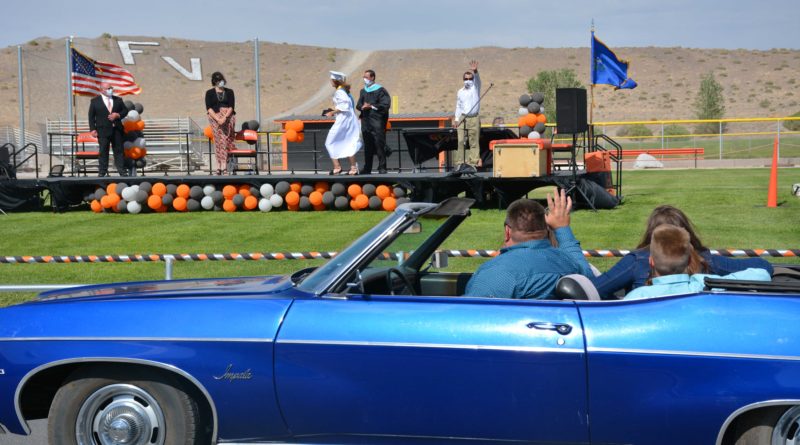 Individually and collectively, every graduating class has its share of adversity and challenges to overcome on the way to their day of celebration.

For the Class of 2020, the usual assortment of obstacles was superseded by the COVID-29 pandemic that cost them, among other things, the last three months of their senior year, their prom, their senior trip and their spring sports season, and ultimately, the chance to celebrate their accomplishments en masse.

For the 232 graduates in the Fernley High School Class of 2020, the traditional graduation ceremony was replaced with a sort of graduation on wheels, a drive-through ceremony in which graduates walked across the stage individually, while their families cheered from cars in front of the stage.

The ceremony was also streamed live on the Internet and broadcast live by Fernley’s Biggest Little Radio, which also did a live Facebook stream.

The streaming broadcast began with a welcome from Principal Kent Jones, followed by a recording of “Pomp and Circumstance.” A recording was played of a group of seniors singing the National Anthem.

Knodell summed up the situation by quoting Mike Tyson, saying “Everybody’s got a plan until they get punched in the mouth.”

“And oh, did we get punched in the mouth hard,” Knodell said.

But, Knodell said, he isn’t going to allow that punch to keep him down.

“I’m going to get up and fight harder than I ever did before, so this event in our history doesn’t define what it has done to me, but what I’ve done to the challenges laid before me,” he said. “So, I ask you, peers of my generation, what are you going to do when life socks you in the face?”

Parsons thanked the rest of the graduating class for the impact they’ve each made in her life, and said the memories of state championships, Homecoming events and even just messing around in class will last a lifetime.

She disputed the notion that high school graduation is often considered the celebration of the best four years of our lives.

“We all have grown immensely as individuals, whether it be academically, mentally, physically or emotionally,” Parsons said. “But these four years are not the peak of our lives. We will celebrate many more changes, events and celebrations to come.”

Condie said the Class of 2020 is full of some of the most talented students, athletes, musicians, actors, artists and leaders in the state, and some might even say in school history.

“This may not be a normal ceremony, but we aren’t a normal class,” Condie said. “We were born in a time of tragedy, around the 9/11 attacks, and now we start our journey into adulthood in a troubled world. This situation has been described as unfair, which is completely valid.”

Condie said all that the pandemic has taken away is something she still has a hard time fathoming.

“This pandemic is a time to appreciate our loved ones, our health and all the memories we’ve been blessed with thus far in our life,” she said. “This pandemic is also a time to not take anything for granted, especially life. With these lessons, we can and will bounce back with deep determination. We may not be a traditional class, but we are the most resilient.”

Condie asked the graduates to reflect on their times at Fernley High, which she called the best school in all the land.

“I hope you remember and cherish all the memories. I hope you stay connected to all the influential people you’ve met along the way,” she said. “I hope you’re grateful to be a Vaquero and team member of the Class of 2020. I know I am.”