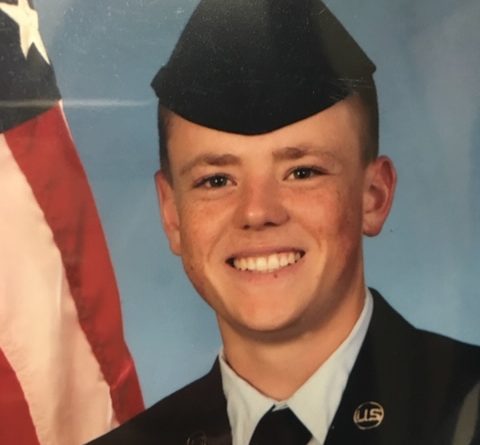 Teron James Unger of Fernley was recently selected to be a United States Air Force Thunderbird.

Ungerwas selected as a F16 maintainer, and will be stationed with the USAF Thunderbird team at Nellis Air Force Base in Las Vegas.

In order to become an active Thunderbird, you must be nominated by at least two current T-birds. And then, it works like a big boy’s fraternity; all 55 active members must vote you in.

The USAF Air Demonstration Squadron (“Thunderbirds”) is the air demonstration squadron of the United States Air Force. The Thunderbirds are assigned to the 57th Wing, and are based at Nellis Air Force Base. Created 67 years ago in 1953, the USAF Thunderbirds are the third-oldest formal flying aerobatic team (under the same name) in the world, after the French Air Force Patrouille de France formed in 1931 and the United States Navy Blue Angels formed in 1946.

More than 120 enlisted personnel, representing nearly 30 career fields, form the backbone of the Thunderbirds. Enlisted team members are selected from units across the Air Force in a highly competitive hiring process. While each position has its various selection requirements, all eligible candidates must show a proven record of success and extensive job proficiency.

Enlisted Thunderbirds must have served in the Air Force for at least three years before they can be considered for the team. If they are hired, they will typically serve between three and four years as a Thunderbird.

Every new team member begins their Thunderbirds assignment learning about life as a Thunderbird, the team’s long and detailed history, its heritage, mission, and squadron-specific policies.

The in-processing culminates in an oral exam where they are tested by their fellow Airmen on anything and everything related to the Thunderbirds. Once they complete the final test, the squadron commander rewards them with the Thunderbirds patch and coin.

Unger is a 2017 graduate of Fernley High School. His family moved to Fernley during his 8th grade year from Battle Mountain. Unger was a navy sea cadet at age 11 and enlisted into the US Air Force in August, 2017.  He did basic training at Lackland AFB in Texas and was a top honor graduate. He has been stationed in New Mexico since he graduated with honors at tech school out of Pensacola, FL in aircraft structural maintenance. Unger was awarded Senior Airman Below the Zone in the summer of 2019. Below the Zone is a competitive early promotion program offered to enlisted U.S. Air Force personnel in the grade of Airman First Class/E-3. This early promotion opportunity is restricted to exceptional Airmen who stand out from their peers and perform duties at a level above their current rank.

Teron was also awarded maintainer of the 4th quarter 2018, and the 1st quarter of 2019. And he has also been awarded the Air Force achievement metal. It is awarded to Air Force personnel for outstanding achievement or meritorious service rendered specifically on behalf of the Air Force. It may also be awarded for acts of courage lesser than for award of the Air Force Commendation Medal (AFCM).Aug 23, 2010

The ribbon is awarded to graduates of Air Force basic training who have obtained an honor graduate designation and demonstrate excellence in all areas of academic and military training. An airman must achieve at least a 90 percent on his or her physical fitness level during the final AFBMT physical fitness test.