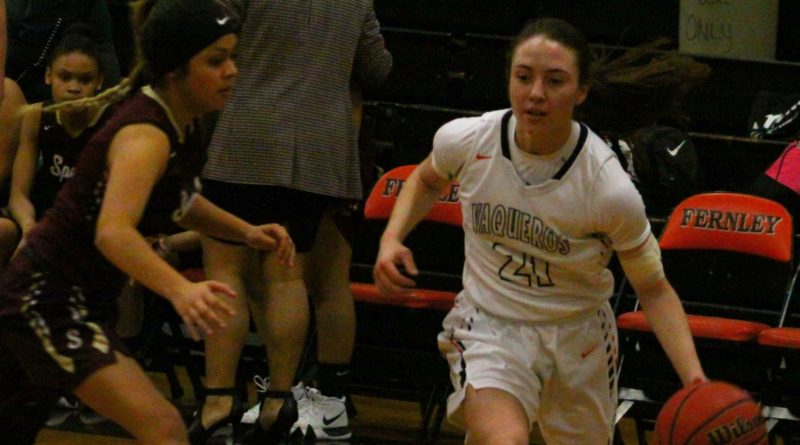 The Fernley High School girls basketball team got off to a pair of strong starts and led at halftime in both games last weekend, at Lowry and Fallon.

In the end, however, they came back home with a pair of hard-fought losses, dropping to fifth place in the Northern 3A. They hope to stop that slide and climb right back up the league ladder as they host three home games this week, against Dayton Wednesday, Spring Creek Friday and Elko Saturday.

The Vaqueros forced some early turnovers and jumped out to a 9-2 lead. They held a 12-8 advantage after a quarter and were still up 19-18 at half, but were having problems handling Lowry’s press.

“Their pressure defense gave us fits all night and we didn’t do a very good job of getting open or using our size advantage inside,” coach John Rogers said.

The Buckaroos took the lead in the third quarter and opened up their advantage early in the fourth.

“All in all, it was a pretty even game except for a 3-4 minute time frame between the third and fourth quarter when they hit a bunch of 3’s and we didn’t make shots on the other end.”

“The girls played hard but Lowry had our number tonight,” Rogers said. “We will have to regroup and work on some things for next time around.  Karli Burns lead the team with 16.

The Vaqueros got off to an even better start Saturday, before falling at Fallon.

Rogers said the Vaqueros confused Fallon on defense and attacked the basket, and Sullivan also hit pair of 3-pointers to give Fernley a 16-8 lead after one quarter. Fernley was able maintain the strong start into the second quarter and held on to a 29-22 halftime lead.

“Our girls did a really good job getting rebounds and not turning the ball over, which helped us hold the lead the entire first half,” Rogers said.

“We just struggled to finish shots that we were making in the first half and Fallon did a good job of adjusting to our defense with Leta Otuafi just attacking and finishing at will,” Rogers said. “She is such a tough player and she took the game over.”

Otuafi ended up with 31 points for Fallon, but Fernley still had a shot late being down by 7 with a minute to go, but we couldn’t get the defensive rebound on missed free throws and Fallon ended up extending its lead.

“I was extremely proud of our girls and after a tough game the night before and getting home late I wasn’t sure how we would react to the best team in the state the last three years,” Rogers said. “After seeing our performance today I know our players have a ton of heart and desire to succeed and we took a big step going into the second round of league play.”

Sullivan had 17 points to lead the Vaqueros, and Katelyn Bunyard had her best game of the year, chipping in 14.