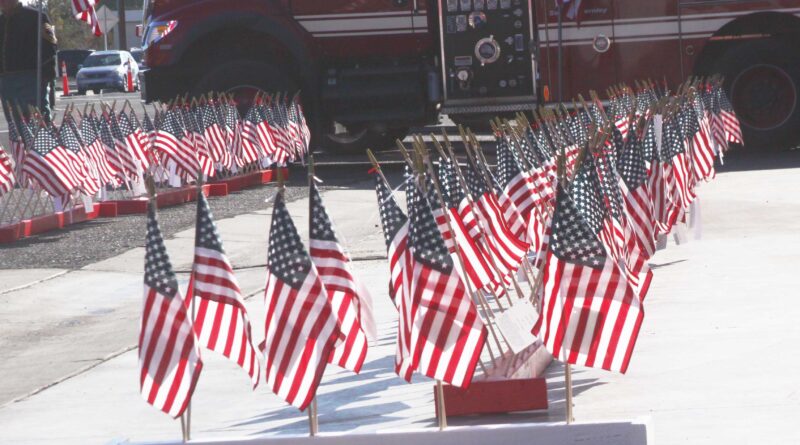 Oberg named Patriot of the Year

At 8:46 a.m. just after North Lyon County Fire Protection District Public Information Officer Jim Sullivan began to lay out a timeline of the terrorist attacks of Sept. 11, 2001 during Fernley’s 9/11 Commemoration Ceremony, a cannon was fired.

The cannon was fired three more times during the ceremony, coinciding with the timing of the four planes involved in the terrorist attacks, as well as sirens marking the collapse of the twin towers of the World Trade Center.

It was all part of Fernley’s remembrance on the 20th anniversary of those Sept. 11 terrorist attacks, which included the jarring actualizations of the timeline of that day.

The ceremony included bagpiper Ray Palmer performing Amazing Grace to open the ceremony, a proclamation read by Mayor Roy Edgington, a musical performance of “Battle Hymn of the  Republic” by Trisha Zinda, special recognition of Nevada Veterans Coalition President Brett Palmer, who died Aug. 23, and the presentation of Fernley’s Patriot of the Year award to local contractor Gary Oberg.

“Today is not a day of celebration, but a day to remember all those who have given so much, to help us protect our freedoms,” said Brigadier General Michael Hanifan, the keynote speaker.

“Within that 102 minutes, those 2,977 people carrying on with their morning, doing what they do on a typical Tuesday, were gone,” Sullivan said.

Among the killed were 343 firefighters, 71 law enforcement officers, 55 military personnel, a total of 2,605 U.S. citizens and 372 citizens from more than 90 other countries working within the World Trade Center. In addition more than 2,500 people were injured, and many more have died of cancer and other diseases in the subsequent years because of exposure to toxic chemicals at Ground Zero.

“New generations are with us, and just as our parents and grandparents taught us to never forget Pearl Harbor, we will teach you to never forget 9/11. Together we will never forget,” Sullivan said, repeating the words of United Flight 93 passenger Todd Beamer, who was among the group of passengers who stormed the cockpit to try to regain control of the plane. “Let’s roll.”

Former Fernley mayor David Stix, who was mayor at the time of 9/11, talked about commemorating the events of 9/11 and remembering those who died. Sheriff Frank Huneill, who is also a captain in Smith Valley Fire Department, put on a fireman’s helmet spoke in honor of police officers and first responders.

Hanigan then talked about how the world has changed, both in the immediate aftermath of the attacks, and in the 20 years since. Hanifan ran the airport security operation at Reno-Tahoe Airport that started Oct. 1, 2001. The talked about how we’ve become accustomed to TSA checkpoints when we travel, about additional security measures at large events, and how the military is more trained to support counterinsurgency operations.

“9/11 was a terrible, tragic event, that we need to work to  ensure never happens again,” Hanifan said.

While 9/11 was a horrific event, Hanifan said that among the positive outcomes in response to 9/11 is that today’s National Guard and reserves are much more ready to deploy overseas to support any war fight than they were prior to 9/11, and are better trained to handle domestic emergencies, earthquakes, Hurricane Katrina.

“We are neighbors helping neighbors,” he said.

Among the positive changes in the military, he said all flight medics must now be trained to the same standard as civilian paramedics.

Hanifan said we must never forget those first responders “who demonstrated selfless service and heroism on that fateful day, by rushing into the World Trade Center and the Pentagon, or the courageous passengers of United Flight 93 who fought back against those hijackers to ensure no other building or structure would be destroyed by those hijackers.”

Cody Wagner, president of the Fernley Community Foundation and an active leader in bettering the community, presented the Fernley Patriot of the Year award to Oberg. Oberg was initially nominated by Brett Palmer.

Wagner said Oberg exemplifies the word patriot in every sense of the term. He called Oberg a proud American and relentless supporter of our veterans, who has on the local level given everything asked of him to support the community and Nevada Veterans Coalition. That includes hours of time as well as financial support, and support of community service groups and youth sports.

“I confidently say that our city would not be the same place to live and enjoy without their contributions,” Wagner said of Oberg and his wife Delores.

“I have no idea what to say other than thank you very much for all your support,” he said. “I don’t know what to say. I’m totally shocked. “

In addition, Sharon Serenko, a Nevada Veterans Coalition member and chaplain, presented a plaque in honor of Brett Palmer to his wife Lynette.