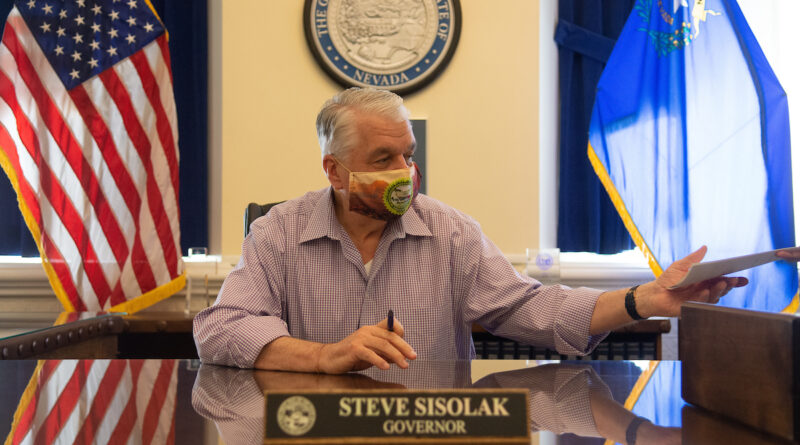 By Michelle Rindels and Jackie Valley

Gov. Steve Sisolak will extend Nevada’s soon-to-expire eviction moratorium until mid-October, while trying to fast-track the launch of a renter mediation program and adding $10 million for residential tenant assistance payments.

Just hours before residential evictions on the basis of non-payment of rent were allowed to legally resume on Sept. 1, the Democratic governor’s office announced at a press conference in Las Vegas on Monday that the freeze on evictions will continue for another 45 days. He said his staff had been working up until Monday morning trying to figure out a way forward without an extension.

“At a time when it’s 108 degrees out, and people are struggling to get by, and we don’t have the federal resolution to unemployment that’s been promised coming forward,” he said, “I just felt compelled that it was in the best interest of folks living in Nevada that we extend it for 45 days and try to get everybody to work together.”

The decision drew criticism from Nevada Realtors, who said they sympathized with tenants facing eviction but that the extension gives small-time landlords little recourse and was announced with less than a day’s notice.

“We are very disappointed in Gov. Sisolak’s decision today to extend the state’s eviction moratorium for another 45 days,” said association president Chris Bishop. “We recognize that thousands of Nevadans may be facing eviction because they have lost their jobs or had their incomes reduced since this pandemic and economic downturn began in March. … However, this extension creates a tremendous hardship for thousands of property owners in Nevada, who are now unable to collect the rent they are owed for at least another 45 days.”

The move comes amid ongoing efforts to set up a residential eviction mediation program. Last month, the Legislature approved a bill creating the program as a way to prevent a backlog of eviction court cases; however, Supreme Court officials recently said the mediation program likely won’t be up and running until late October.

To that end, Sisolak said he is waiving a 60-day requirement for making rules for the program to expedite its creation. He said he expects the regulations will be approved and program implementation will begin before the end of September.

In the meantime, officials have referred people to a general mediation program in Clark County that deals with a wide range of disputes, from workplace pay issues to tension between neighbors over barking dogs.

Beyond the courts, the extension is aimed at allowing the state to catch up on a backlog of unemployment claims. State officials have yet to publicly say how many legitimate unemployment claims they believe remain unpaid, although a new “strike force” led by former Assembly Speaker Barbara Buckley is working on determining the size of the backlog and clearing it.

Sisolak did say the state anticipates about 5,000 people whose benefits have been delayed will see money this week, and a new program called “ID Me” will help claimants who have been flagged because the state has had trouble determining they are who they say they are. Those benefits could help people meet their rent obligations.

Another hurdle tenants face is that a federally funded rental assistance program, which started with $60 million available statewide, has temporarily stopped accepting applications in Clark County as it tries to catch up on a heavy workload. As of Wednesday, Clark County had allocated $1.7 million worth of rental assistance to 732 households. Officials are continuing to process another 5,300 applications in the queue and have been swamped by more than 30,000 inquiries about the program.

Meanwhile, the head of the Reno Housing Authority reported that as of last week, $22,000 for rental assistance had been paid out — only 11 applicants had received a portion of the authority’s $5 million in aid. Of more than 1,600 applicants, only 232 applicants had completed follow-up steps needed to finish up the application.

Sisolak said his staff had reshuffled federal coronavirus relief money and found enough to add $10 million to the rental assistance program, which cuts rent checks to landlords on behalf of tenants who have fallen behind on rent. He couldn’t say whether Clark County would be reopening the application process, but did indicate that officials were working on ways to improve the program, such as paying larger landlords on behalf of a group of tenants rather than requiring individual applications of all residents.

The Guinn Center for Policy Priorities sounded the alarm earlier in the summer that between 118,000 to 142,000 households could struggle to pay their rent by September, and unpaid rent in Nevada could reach $1.1 billion if unemployment among renters remains at 38 percent.

But the extensions of the eviction moratorium have frustrated mom-and-pop landlords, many who own fewer than a handful of properties, and are feeling the financial strain of keeping them afloat, in some cases, after five months of no payments.

“To our Nevada landlords: I recognize that this time is hard on you too. You pay your bills with this money, you rely on these funds,” Sisolak said. “That’s why it was so important to me to set aside an additional $10 million for this rental assistance program.”

Sisolak said part of his calculation to extend the moratorium came after talking to service providers and realizing it would be problematic to have large numbers of people lining up to get help from charities. The governor said he was confident agencies and organizations can work together over the next 45 days to make sure programs are up and running.

While Nevada’s coronavirus situation has shown some improvement, Sisolak also said he is “extremely concerned” about the coming Labor Day weekend and urged residents to avoid having large gatherings where the virus could spread easily.

“Now’s the time to double down and to do even more — to make sure you wear your mask, to make sure you’re social distancing,” he said. “You don’t have a barbecue in your backyard with 50 or 100 of your closest friends where they are going to all congregate. Try to keep your gatherings small. Try to stay as safe as you possibly can so we can get through this weekend.”

Declaration of Emergency Directive 031.8!31!20 by Michelle Rindels on Scribd