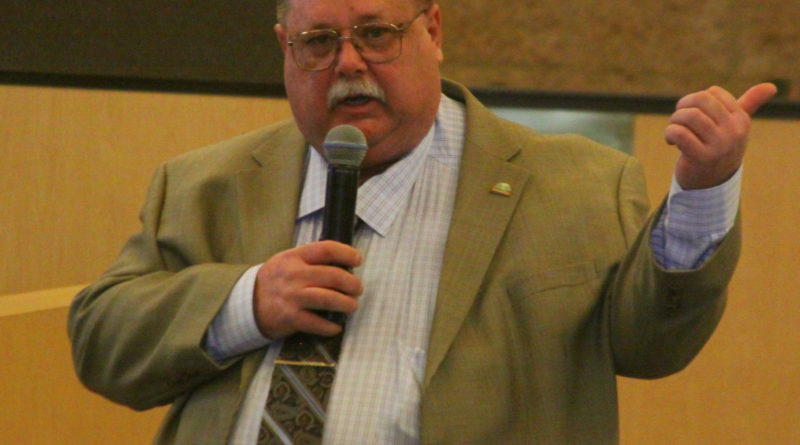 Fernley Mayor Roy Edgington took questions from a crowd of about 30 residents, ranging from the timing of the city’s recent water rate increases, to how the increased revenues will be spent, as part of his most recent Coffee With the Mayor discussion with residents last Saturday morning.

Edgington spoke of the city’s difficulties in dealing with lost property tax revenues and lack of Consolidated Tax revenues, and he said the city is working with the state legislature to try to find solutions to the city’s need for more money.

But most of the attention from the audience centered on the city’s water and sewer rate increases, which took effect this month.

Edgington said he understands the plight of resident who believe the water rates are too high, but said the city had to take the action in order to be able to continue to operate its water and sewer systems.

Edgington was asked where the money from the water rates goes, and he said it is used to operate, maintain and repair the city’s water system.
“It has to be solvent,” he said. “The last eight years we haven’t put any money away for capital projects. We’re trying to stay on top of it to start with so don’t we have to deal with things down the road.”

One resident accused city officials of waiting until after the November election before announcing the rate hikes.

Edgington and other city officials in attendance denied that resident’s accusations that residents were not notified about the water rate increases until eight days after the election.

City Manager Daphne Hooper said the city started having discussions a year before, and included a water and sewer rate study and a comprehensive study of its systems as one if its priorities in the previous year’s budget.

The city held a 4-hour workshop on Oct. 13 to consider rate increases proposed by Hansford Economic Consulting, the company that produced the rate study, voting that night to direct consultant Catherine Hansford to come back with a different proposal that was more affordable for residents.

The council then approved a modified rate increase proposal by Hansford at a special meeting on Nov. 14.

“The idea that it was some kind of conspiracy is flawed,” City Councilwoman Shari Whalen said. “I challenge you, if you have a better idea, then bring that solution to us and we will hear it.”

Edgington said the city lost about 30 percent of its property tax revenue during the recession, but because Nevada has a cap that allows individual property taxes to increase by no more than 3 percent a year, local governments do not make up the revenue they lose when property values decrease.

He said the city is working with its lobbyists to modify the requirements that would allow the city to get more Consolidated Tax revenue. The city gets about $150,000 per year, while other cities of similar size get several million.

One reason is because one of the state’s requirements for the distribution of C-Tax revenues is for cities to provide police services. Fernley’s law enforcement is provided by the Lyon County Sheriff’s Office.

“The Supreme Court made it quite clear that we have to have a police department, but we’re working to remove that,” Edgington said. “It’s not a dead issue for us. Still pursuing it with our lobbyists.”

One thought on “Edgington faces questions at Coffee With the Mayor”