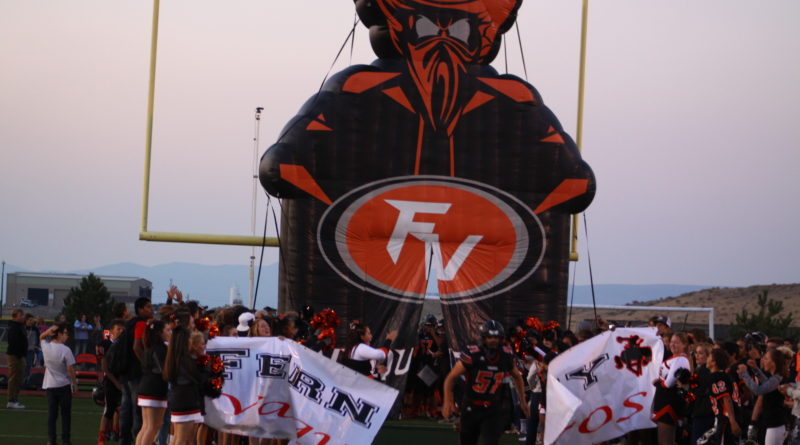 In between greeting well-wishers and accepting congratulations after Fernley’s 26-0 win over South Tahoe Friday night, Chris Ward didn’t have to think very long when he was told that was probably the best a Fernley defensive line has played in his eight years as head coach.

The Vaqueros held South Tahoe to 98 total yards, and had South Tahoe quarterback Matt Cain under so much pressure, they sacked him more times than he was able to throw a pass.

Willy Pritchard ran for 97 yards and a touchdown, Shawn Gleason and Aaron Proctor also ran for touchdowns and Zach Burns connected with Jordan Pressley for another score.

But on this night, the offense was just decor, adding some attractive visuals to the dominant defensive foundation the Vaqueros laid.

South Tahoe came into the game without quarterback Peyton Galli, who was injured the previous week against Spring Creek. Then, star receiver McCallan Castles left the game in the first quarter with what coach Louis Franklin said was a nagging hamstring injury.

“That wouldn’t have mattered, we were going to be back there with that guy, too,” Ward said.

The Vaqueros sacked quarterback Matt Cain at least seven times, and he was able to attempt just five passes, with one completion for 15 yards.

“We didn’t have our starting quarterback, so that hurt to start, and then 11 (Castles) going out hurts too, so, bummer that we didn’t have those two guys,” South Tahoe coach Louis Franklin said. “But great energy and effort by their defense. They played good football, for sure.”

The Vaqueros got the offense in gear on their third possession, which started with a 45-yard pass from Burns to Cameron Bertok. Proctor scored three plays later on a 4-yard run for a 6-0 lead.

The next time they got the ball, the Vaqueros drove 66 yards in nine plays, to score on a 19-yard pass from Burns to Pressley.

The score stayed 12-0 into the third quarterback, where a 52-yard run by Pritchard led to a 3-yard touchdown run by Gleason for a 19-0 lead.

Pritchard’s 4-yard touchdown run with 4:31 left in the game put a cap on the scoring.

“Offense, we’re getting better every week, and I think when we do get clicking, we’re going to be very scary,” Ward said. “When we execute, I think we can play with anybody.”