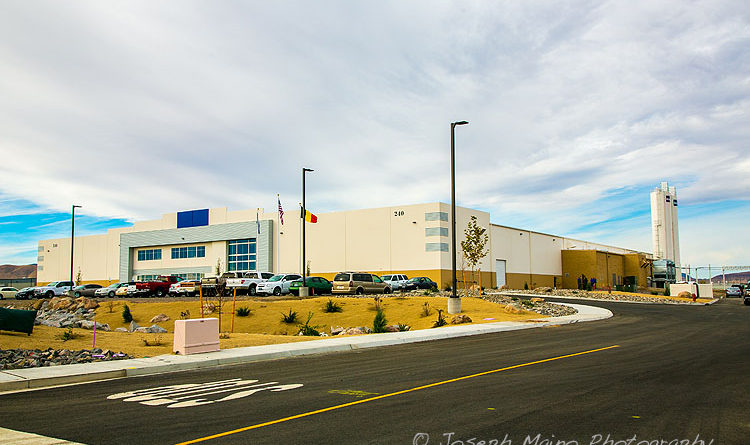 Deceuninck of North America is a PVC extrusion company that is known world wide for producing energy efficient vinyl window and door systems. They are also well known for their commitment to sustainability. The Belgium-based company ships products around the world to Mexico, Canada and even to southeast Asia. Deceuninck is one of the top companies in this sector in Europe and has almost 3,000 employees worldwide.

So how did a world class manufacturing company find it’s way to rural Nevada?

“We are not present out west so we needed to expand,” President and CEO Filip Geeraet said. “We had to expand our Monroe, Ohio facility or look somewhere else. West of the Rockies we only have 1-2 percent market share, so we said this is a huge opportunity to really get to be number one for the U.S. We wanted to be able to serve the huge market in California, but we did not want to build our plant in California because of the business environment in that state. We were looking at Utah and the Reno area.”

Geeraet said the company wanted a sizable lot, and the Fernley location has 28 acres.

“We wanted a lot with a rail spur for sustainability and ease of getting raw materials into the plant, we wanted a good labor force especially from the local community and surrounding area,” Geeraet said. “Once we met with Mayor (Roy) Edgington and his staff, we were sold. We were up and running under seven months. We have hired 30-plus people, many of whom that are local. We are very happy to be here. We are already looking forward to expand. We can expand to three times the size today. Currently we have 150,000 square feet. We want to triple the work force and are planning to introduce other products including protrusion products for commercial applications. Depending on how the market changes, we will add new departments. It’s exciting!”

There is a real possibility that Deceuninck’s move to Fernley will encourage other companies to move here too.

“When they came to Fernley and researched the area, the company President, Mr. Geeraert, personally came to speak to us,” Edgington said. “He told us, ‘You make sure we become part of the community.’ He was dead serious. To build it in seven months is incredible. This is what you want to see. They are also reaching out to other companies and suggest that these other companies might also want to move to Fernley. This is the first really big thing to be built here in over the past six years. “

The Grand Opening was an international event and had dignitaries from Belgium in attendance, including the Belgium Counsel Diplomate, the Honorable Henri Marc Vantieghem. This was his first visit to Nevada. When asked if he had ever heard of Nevada before, he replied, “Yes! Because Nevada was the name of a great battleship. I am a great fan of history and this name of Nevada is always living in my mind.”

He then went on to add, “Spent a nice evening in Reno – Reno by night, very exciting much music and entertainment. I plan to come back with my family to visit the place.

Vantieghem’s enthusiasm for his home country of Belgium was very evident. His eyes lit up and a broad smile took control of his face when he said, “Belgium is fantastic. Even from the Roman time, Julies Caesar said ‘Belgians are the most courageous of the Gall.’ The difference between Belgians compared to others in Europe, is that Belgians are very practical. If necessary, we put our hands into the engine.”

That phrase, “We put our hands into the engine.” may just describe why Fernley and Deceuninck are an ideal fit. The people of Fernley are also known for rolling up their sleeves and putting their own hands “into the engine” to get things done.