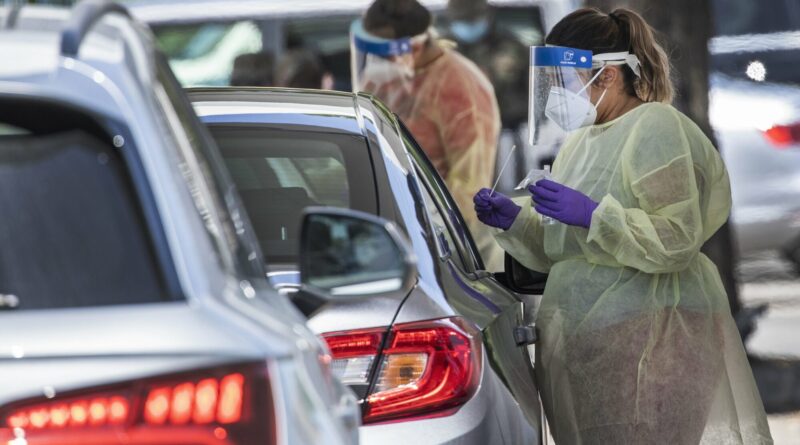 County officials across Nevada were asked a simple, if impossible, question during a state COVID-19 task force meeting on Thursday: What steps would you recommend the state take to stem the rising tide of coronavirus?

It’s the million dollar question not only in Nevada — which is setting records day after day for new COVID-19 cases, hospitalizations and test positivity — but across the country where other states face similar situations. Government officials are grappling with how to beat back a virus that’s spreading like wildfire when so many people have grown weary of following the recommended coronavirus health and safety protocols and are in large part driving that spread through decisions to gather with friends and family members in private.

In Nevada, however, the question is particularly urgent. Gov. Steve Sisolak gave the state two weeks to turn around its coronavirus numbers or face further restrictions. Those two weeks are up on Tuesday, and the numbers aren’t improving.

It’s unclear exactly what those restrictions might look like, particularly because most of the mitigation measures to date have focused on limiting spread in public places, not in private, where rules are harder to enforce. The nine counties that came before the task force this week didn’t seem to have a better idea, either.

Some counties told the task force they didn’t have any recommendations for the governor’s office. The Washoe County Health District suggested that gatherings be limited to 10 people. Nye County suggested more messaging from the state Division of Public and Behavioral Health.

But it was Elko and Lyon counties, two rural, conservative counties where the state has struggled to get buy-in on its coronavirus health and safety measures from community members, who had the most pointed advice for the governor: Whatever you recommend, be specific about what the goal is.

“The goal for all of us, I don’t know that that’s very clear. In my mind I have what the goal is here, for our community here, and that is to make sure we don’t overwhelm our hospital capacity because I just don’t see the disease going away anytime soon,” Elko County Commissioner Delmo Andreozzi said. “If we can really kind of rally behind what the purpose of what we’re trying to do and what the goal is, I think, could help because when people don’t know where they’re going, I think it leaves them a little bit more hopeless.”

Lyon County Manager Jeff Page, who said the situation in his county has gotten so bad he’s taken to arriving to work early and leaving late under the cover of darkness so no one sees him, agreed.

Page said the state needs to make clear that the mitigation measures it decides to take are directly related to the goal of reducing the strain on the hospital infrastructure.

“‘The reality of it is the message, as Commissioner Delmo stated, has to be clear: We’re doing this to reduce the threat to our hospitals and our health care system,’” Page said. “If you will work with us for the next three weeks and do these things, we may have a better chance to get the public to follow suit. But I am here to tell you when people start threatening to shut down the government … we’re doing nothing but creating more panic and anger in our communities.”

Page pointed to the governor’s decision to bring Tony Slonim, CEO of Renown Health to his latest press conference last week as an example of what needs to be done to get the public’s buy in. At that press conference, Slonim talked about how the strain of COVID on Renown Regional Medical Center was so great that it had decided to start treating patients in an alternate care site in its parking garage.

In Carson City, the outbreak at Warm Springs Correctional Center, where more than 80 percent of inmates have tested positive, is so severe that the city has requested that the Department of Corrections establish a field hospital to reduce the strain on the Carson Tahoe Regional Medical Center.

“If people see what the problem is, when the guy from Renown gets up with the governor and talks about how bad it is for his hospital, and when people see those kinds of things they pay attention,” Page said. “But when we have idle threats, and I don’t mean that to sound the way it sounded, but we have threats that we’re going to shut things down. I can’t speak for the urban areas, but I can tell you what it does in my community.”

And it’s not just in rural Nevada anymore, either. The state is increasingly struggling to get compliance with COVID-19 health and safety protocols in urban areas, too. Washoe County Manager Eric Brown highlighted two Halloween parties held in the county, one with more than 150 people and another with more than 500.

“The behaviors I am seeing and that people are disclosing to me are just flat out bad behavior or COVID fatigue. ‘I don’t care. I’m going to have people over to the house for my Halloween party,’” Brown said. “Those are the kinds of behaviors that can go beyond our enforcement efforts in the bars, restaurants, retail, fashion, and again, I’m not speaking against doing those, but the overwhelming, I guess, kitchen table evidence to me suggests that’s where our problem is.”

Humboldt County spokeswoman Nicole Maher added that people just don’t seem to care whether they get the virus, not understanding that even if they don’t fall seriously ill from the virus, they could spread it to someone who will.