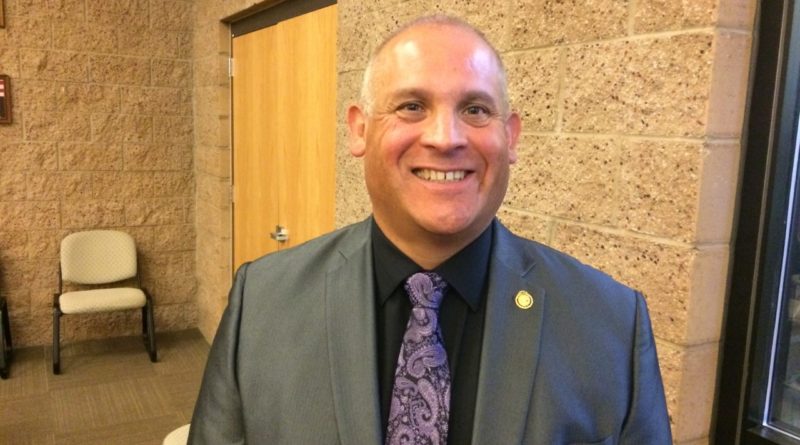 The selection of Torres came by a 3-2 vote following the interviews of three candidates for the vacant seat. Five finalists were scheduled to be interviewed for the position, but two of them withdrew, leaving Timothy Creiglow, Bill Burrows and Torres.

The interviews were conducted by Human Resources Director Shannon McKnight, who had a list of 13 questions for each candidate to address to the council.

The council voted 2-2 to appoint Torres, forcing Edgington, who by city statute is only allowed to vote in case of a tie, to cast the tiebreaking vote.

Edgington said he would have favored Burrows, but forced with the choice of voting either aye or nay on the motion to appoint Torres, Edgington voted in the affirmative.

“I’m extremely happy with the decision,” Torres said. “I will continue to work hard for the City of Fernley and its citizens and the sky is the limit to how successful we can be.”

Council members Fran McKay, who made the motion to appoint Torres, and Stan Lau voted in favor of appointing Torres, while Ray Lacy and Dan McCassie were opposed.

McCassie said he preferred Burrows’ experience, and alluded to a past conflict with Torres as one reason he opposed his appointment.

McKay said she believed Torres was the most qualified of the three candidates, while McCassie and Edgington said they preferred the experience Burrows outlined in his interview, including four terms on the school board in Fairbanks, Ak.

Prior to the interviews, the applicants were sent out of the council chambers, then were called in individually after their names were chosen at random by a drawing.

Creiglow was the first to interview, followed by Burrows, with Torres last. Applicants Wendell Stafford and Scott Gillespie withdrew prior to the meeting. All three applicants said they applied for the position because they had intended to run for election in Ward 4 in 2020.

In their applications, each candidate was asked to list their previous experience serving on a governing board of any type or as a leader of an organization.

Creiglow listed none. Burrows listed four terms, 12 years, on the school board of the Fairbanks North Star Borough from 1993 to 2005. He served as president four times and vice president three and served on the legislative committee. He also served as PTA president several times and one year as president of Fairbanks Light Opera Theatre.

Torres served as a board member of the Nevada Chapter of the National Alliance on Mental Illness and on Lyon County’s first ever Mental Health Board, where he was the first chairman.

Please take a minute or two and tell us about yourself and why you are interested in this position?

Creiglow: 48 years old, lived in Fernley for more than 30 years, married to a third-generation small business owner, works at a refinery in Fallon, has two sons and two granddaughters.

Burrows: Lived in Fernley 14 months. Lived 43 years in Alaska, worked in radio, TV and advertising. Specialty is as a media consultant. Served four terms in the school board in Fairbanks, a district with 15,000 students and the size of New Jersey. Sold insurance for seven years in Arizona before moving here. Married for 41 years with three adult kids. Interested in the position because as I get older, I feel more pressure to accomplish things and take advantage of my experience and talents.

Torres: Third generation Northern Nevadan, has lived in Lyon County more than 40 years, in Fernley 16 years. Raised family in Fernley and has extended family in Fernley. Been a coach, member of Chamber of Commerce, family volunteers at the Community Thanksgiving Dinner. Worked 35 years in local government as a sheriff’s deputy in a responsible, positive way.

What do you believe are the three greatest strengths of the City of Fernley?

Creiglow: No. 1 Location, particularly the Interstate and rail lines. No. 2 I think this still feels like a small town. It’s hard to go shopping or to a restaurant without running into a friend or someone you know. No. 3 A lot of room for growth, industry and housing.

Burrows: Location – strategically a great place, you can tell that by the growth. Because of the location, the growth potential of the city and making sure we don’t lose the small town feel.

Torres: No. 1 is the mayor, city council and staff. No. 2 is the recognition that we have serous growth coming, and trying to find the ways and means to deal with growth. Third, I’m very impressed with the redevelopment ideas, since we don’t get a fair share of C-Tax. Respect and kudos for pushing that forward.

Creiglow: I went to a mayor’s reelection fundraiser, met candidates and other officials, and it just expanded my interest.

Burrows: I was planning to run for election in Ward 4 in 2020, and the motivation was an opportunity to sit on the council this way without the pains of running for office.

Torres: My motivation is purely to use my knowledge, expertise, education and experience to serve the city in the best way possible.

Please describe any experience you have you have regarding budgets and financial reports; and what role do you believe City Council plays regarding the City of Fernley annual budget?

Creiglow: At work I’m expected to fix machinery under time and under budget. The problem for the city is where the money comes from. We’re responsible for the town’s money but we can’t be spending it like it’s free.

Burrows: Owned two businesses in Alaska and an insurance agency in Phoenix. My most relevant experience is my time on the school board. About 73 percent of the funds were from the State of Alaska and the rest we tried to get from borough government.

Torres: I served on the negotiating board as an employee, as a middle manager and as an administrator, for several years I was in charge of an $11 million budget at the direction of the sheriff to make sure it was spent the best possible way. Also was a key member of the Lyon County team for planning of the new justice center in Yerington. I was very involved from A to Z in that project.

Burrows: That’s hard to say without sort of insulting the council. The No. 1 thing is communication. The city’s website, Facebook page, etc. serves people who are looking for information, but how do you reach out to others who are busy and get them to know what’s going on?

Torres: I have a large concern about our water needs and how we sustain our water for the future, and close behind that is public safety. We need our own law enforcement and to make or own decisions on how it works and what the priorities are.

Creiglow: Absolutely. Each council member has one vote and I will respect the votes of my colleagues.

Burrows: Nothing is more emotional for people than their kids. I was always dealing with difficult situations on the school board.

Torres: It’s not an easy job to be on a council or commission. The frustration the public feels can often be fixed with communication. A lot of difficult decisions the City Council has to make, the best way is what is the best decision for everyone in the city as an overall group.

Creiglow: Represent the whole city, not just their ward. Be accessible.

Burrows: Never forget that we all represent every single citizen of this town. Also even though they are separate entities, the fire district, the school district, we are all serving the same group of people.

Torres: Once we make a decision by majority vote, we have to stick with it. I think we’re doing a good job and I think we should continue pushing the city forward in the direction we’re going.

Do you have any interest in or participate in any professional or personal activity that could lead to or be perceived as a conflict of interest if you become appointed? If yes, please explain.

All three candidates said they do not.

What do you believe is the single most compelling issue facing the City of Fernley and why?

Creiglow: Growth. It needs to be controlled so we don’t outgrow our infrastructure.

Burrows: One issue is I hear about is code enforcement, but you are working on that. Sufficient and predictable revenue.

Torres: I go back to the water issue. If we’re unable to sustain our current population based on water storage, how can we sustain growth?

Describe your leadership style and how you believe it would benefit the City of Fernley.

Creiglow: I lead from the front. I take initiative.

Burrows: I’ve written and produced more than 5,000 commercials and run political campaigns, and a thing I seem to have a knack for is taking a complex issue or idea down to the key element and explain it to people. I have the ability to listen and see both sides of an issue.

Torres: My leadership style is to sit back and watch what’s developing, get as much information as possible, then make a good, educated decision.

How would you encourage more citizen involvement?

Creiglow: Explained an idea for a trash collection day where residents could bring trash and clean up the community, and business could get involved with donations.

Burrows: Just talking to people. It’s going to where they are and let them know what’s going on. I do it with my neighbors all the time.

Torres: Continued education and communication. The city is very involved in community events, but the Latino population, I think we’re missing out on.

When you hear something that concerns you in the city, what steps would you take to see that this concern is resolved?

Creiglow: Talk to the council and the mayor.

Burrows: Research it. Talk to the people who would know. Talk to staff and then take it to the mayor. Get all the information and don’t run off half-cocked thinking there’s a problem when there may not be one.

Torres: If it’s a major concern, something a citizen heard or told me, my first step would be to go to the city manager. If it’s an issue under the council and mayor, take it to the mayor. If it’s an operations problem, let the city manager know. I think that’s the best way to handle it

Creiglow: Explained that he is a mechanic responsible for millions of dollars of machinery. I love this town.

Torres: I believe I am the best person to sit on the City Council. Torres recapped his experience working for Lyon County and said it was also a benefit working for Douglas County for two years and seeing how things are done by the City of Minden and Douglas County.