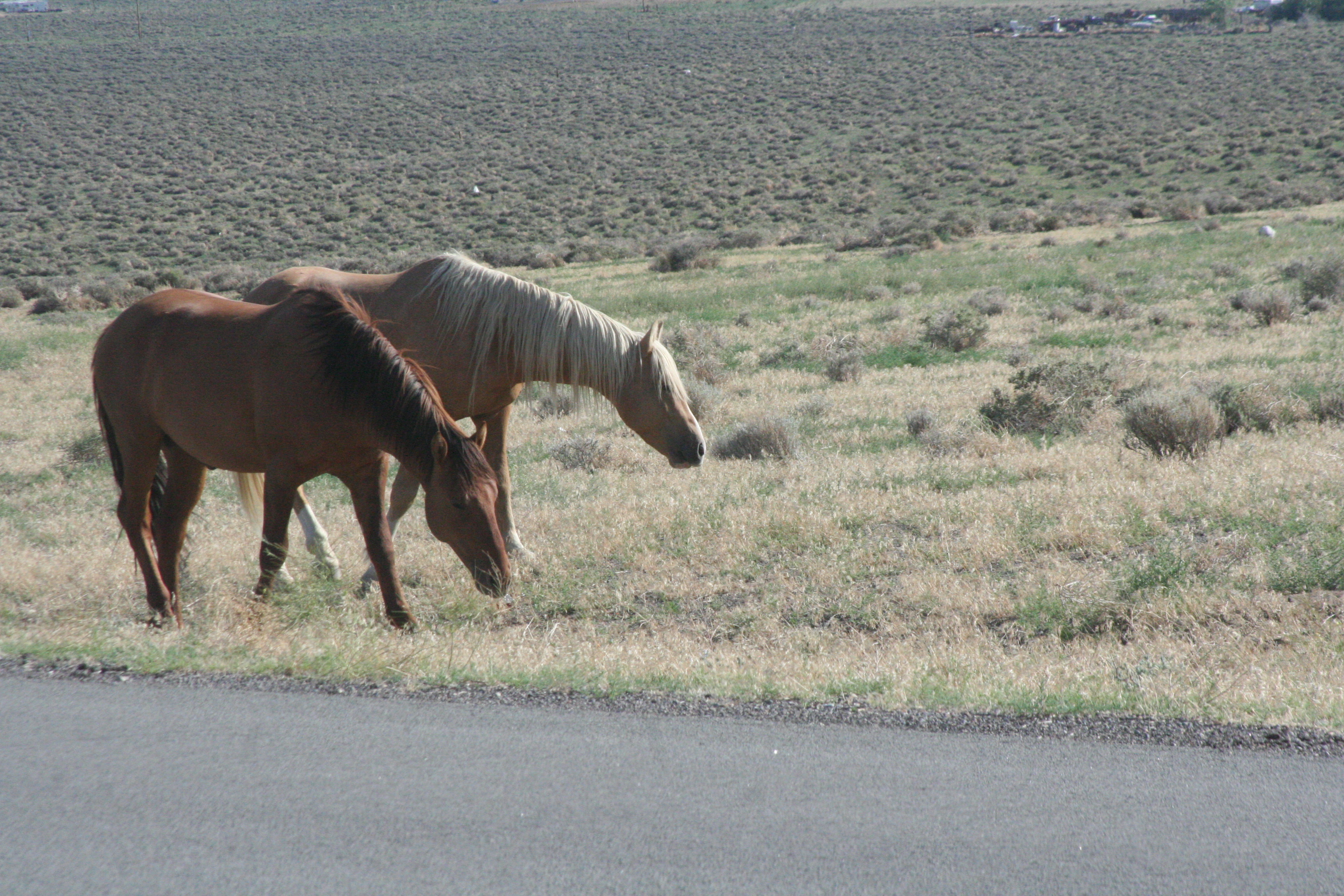 Few public lands issues in the American West are as charged as the question of how to manage wild horses. And nowhere is the issue more challenging than in Nevada. More than half of the roughly 73,000 horses that roam federal land live here. They fill the state’s rangelands, the desolate basins that stretch across the Great Basin region.

Across the United States, they are seen as unique symbols of Western freedom, figures that evoke the unrestrained frontier. But wild horses and the ecosystems they inhabit face a less visible reality, one that most politicians acknowledge as a long-term threat to the range.

The wild horse population of about 73,000 far exceeds what the Bureau of Land Management believes to be sustainable, 27,000. On top of that number, more mustangs, about 44,000, have been captured during years of BLM roundups and live off the range in corrals or on pastures.

With a new administration in the White House, Congress is again debating what to do about wild horses, a protected species that has its own carve-out in federal law. The Wild Horses and Burros Act, passed in 1971, required the BLM to protect wild horses as a symbol of the West.

The problem has always been, according to the BLM, that it has few tools to do so. There are few predators in the areas with excess wild horses. Unlike other wildlife, the wild horse population cannot be controlled by hunting. Birth control is one favored approach but it can be expensive and some advocates oppose its use.

So for decades, the management for wild horses has been to collect them in roundups the BLM calls “gathers.” The horses, which Congress declared “living symbols of the historic and pioneer spirit of the West,” are then held in captivity by the BLM, where they often live out their lives. As of last year, about 12,500 horses were kept in holding corrals and another 31,000 in pastures. They await sale or adoption, though few are adopted, and sales are limited by stipulations that work to prevent sale for slaughter. In old age or sickness, they are allowed to be euthanized.

The result is that many “wild horses” are no longer in the wild, said David Philipps, a New York Times reporter whose new book “Wild Horse Country”  tracks the history of horses in the West.

“Our entire approach is a giant contradiction,” he said. “It’s not a surprise that no one is happy with it.”

In a budget proposal earlier this year, the BLM under the Trump administration called for the “humane euthanasia and unrestricted sale of certain excess animals.” The BLM’s push to cull horse herds would lift restrictions that prevent sales to slaughterhouses in Mexico and Canada.

The 1971 law technically would allow this, but neither the public nor Congress have supported those measures. When Congress approves the BLM budget it usually places restrictions on the killing of healthy horses through unrestricted sale or euthanasia. That could change this year, wild horse advocates worry.

In July,  a House Appropriations Committee approved an amendment from Utah Rep. Chris Stewart that lifted the prohibition on euthanizing healthy excess wild horses. Supporters of it emphasized that these horses could not be sold to slaughter for commercial products, but he faced pushback from advocates and several lawmakers, including Rep. Dina Titus.

Titus sponsored an opposing amendment to restrict killing healthy horses, but the proposal was rejected in the House Rules Committee and never received a vote, according to her office.

“I’m under no illusion that there are real challenges to the management of our wild horse and burro population,” Titus told a congressional committee, pushing to put the legislation to a vote. “But I believe that the changes that are being proposed…to lift the more than two-decades ban on federally-funded slaughter of these animals is not the answer to management.”

After the Stewart Amendment passed, wild horse advocates called it a “death warrant.“

The proposal now awaits consideration in the Senate, where even concerned wild horse advocates believe it is unlikely to pass. There’s one political consideration that has always saved wild horse populations: the public is overwhelmingly opposed to killing healthy horses.

The advocates are more concerned that language could be inserted by a conference committee, the panel of lawmakers that convene to iron out differences in House and Senate bills.

“That’s where the bigger threat is,” said Deniz Bolbol, a communications director for the American Wild Horse Preservation Campaign, which is active in Nevada and the West.

Even those who supported the Stewart Amendment see it as a last resort.

Rep. Mark Amodei, who represents Northern Nevada, supported the Stewart Amendment, which allows euthanasia of healthy horses. But he told the Elko County Commission in August that it was not a “panacea” and that it was important to build support around other options. “If we don’t get behind a birth control option as a tool,” he said, “the only stuff that’s left is euthanasia.”

During his presentation, Amodei told commissioners that he hoped the Stewart amendment would place pressure on politicians and advocates to support a fertility management program.

“I don’t think [public lands] can be continued to be expected to absorb more and more pressure from one species to the detriment of other species,” said Amodei, who sees it as a priority.

Ranchers, whose cattle compete with wild horses for forage and water, have sued the BLM, alleging that the agency should be allowed to sell wild horses without limitation. A Reno court dismissed the suit, from the Nevada Association of Counties and the Nevada Farm Bureau, in 2015 and the 9th Circuit denied an appeal earlier this year, according to the Associated Press.

“We support removing the riders that Congress has put on in the past and allowing unlimited sale,” Doug Busselman, the farm bureau’s vice president, said in an interview last week. “Trying to pretend that limited non-management is going to somehow solve the issue is a fallacy.”

He said the current situation is setting up a scenario in which horses, in overpopulated herd areas, become emaciated and starve to death or die of thirst in drought conditions. Overgrazing in areas with overpopulated wild horses, he said, damages the range for all species. State wildlife officials said overpopulation can interfere with other uses, like sage-grouse protection.

Wild horse advocates say these claims are overstated. The BLM’s policies sway in favor of ranchers, they argue, and overgrazing is the result of cattle, which far outnumber horses.

“It’s all skewed in livestock’s favor,” said Bobol, the communications director for the American Wild Horse Preservation Campaign. “And the wild horses are scapegoated for everything.”

Advocates and some wildlife managers believe the BLM is jumping to an extreme answer —  killing healthy wild horses — without exploring all approaches. But in recent years, as the captive horse population has increased, the BLM’s funding has shifted away from management. It’s just trying to keep up. More than half of federal horse management funding now goes to care for wild horses off-range, a program that the BLM foresees costing $1 billion over the horses’ lifetimes.

A plan to address the issue should combine several approaches but rely as much as possible on natural interactions with wildlife, he said. That would require the BLM and other federal agencies to coordinate wild horse management with its plans for mountain lions, a predator.

“I don’t think there is one solution,” he added. “There are probably many.”

A National Academy of Sciences report, compiled in 2013 by a panel of experts, listed the use of fertility control as a promising path. Continuing ‘business as usual,’ the report said, “will be expensive and unproductive for BLM and the public it serves.” But even birth control has its drawbacks. Fertility control can be expensive and a challenge to administer. Some treatments require a booster every year. Some wild horse advocates have even sued to stop birth control.

A few Western states have tried to pressure the BLM or take some control from the agency.

This year, Utah lawmakers proposed managing the population by handing more control to the state. Last year, Gov. Brian Sandoval threatened to sue the BLM if it did not adequately fund its wild horse management program. At the time, the governor’s office said in a news release that overpopulation threatened greater sage-grouse habitat and put stress on ranchers near Elko.

“The BLM has underfunded the wild horse program for years and as a result, the livelihood of our local economies is now being threatened. For too long, Nevada has been forced to compensate for the federal government’s inability to manage these growing populations without the appropriate resources,” Sandoval said.

Lynn Huntsinger, an ecology professor at Berkeley and an author of the National Academy of Sciences study, said the most socially acceptable solution probably lies in controlling fertility.

“You don’t have any good tools right now,” she said.