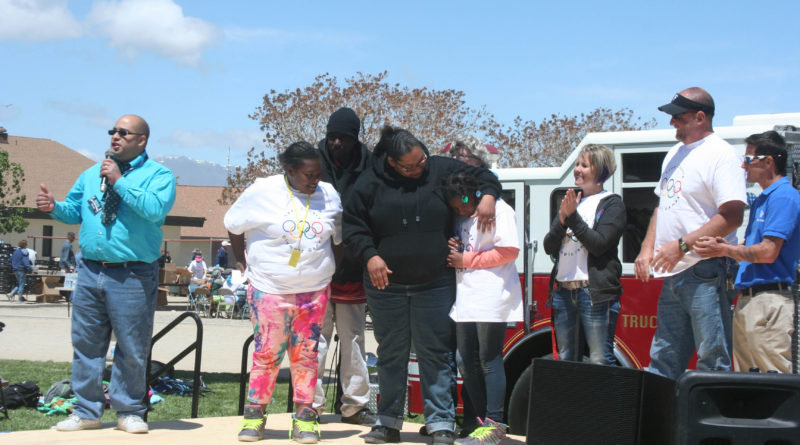 Fernley’s Biggest Little Radio, KRNG, 101.3 FM, is sending a local family on an all expenses paid vacation to Disneyland as part of its first ever Good News Project.

Station owner and radio personality J Fierce Rodriguez made the presentation to Tanisha Turner and her family, Dayon Turner and daughters Jasmine Hayes and Heaven Hale during the Lyon County Special Olympics on May 17 at Fernley Intermediate School.

“As much as I’ve wanted to go, and the girls wanted to go and been bugging me about it, I never thought something like this would happen,” Tanisha Turner said.

Turner and her family moved from Richmond, Calif. to Fernley two years ago to get away from the violence of city life. Turner said both girls lost their dads to shootings.

“A lot of stuff happened so we came here for a fresh start,” she said.

Turner said moving to Fernley has been even better for the girls than she could have hoped. She said Jazmine and Heaven, who are both in sixth grade at Fernley Intermediate, are doing well in the classroom and thriving in their new environment.

One thing they’ve never done, however, is take a vacation.

That will change, thanks to the Good News Project spearheaded by Rodriguez and the radio station, in conjunction with Hollywood/Disney Records, Fernley Intermediate School, The Buena Park Hotel Inn & Suites, and Royal Floors.

Rodriguez said he hopes the project will inspire others, as well.

“We’re trying to spread good news to the community,” he said.

Rodriguez said the family will choose the dates when they will be able to make the trip, then the record company and radio station will make all the arrangements for them.

When he began to work on the project, Rodriguez said he consulted with FIS principal Rob Jacobson and the other principals of Fernley schools to find a deserving family.

“I want to thank FIS, Mr. Jacobson, the radio station and Royal Floors for the opportunity, and thank all the teachers, and thank Fernley, period,” Turner said.