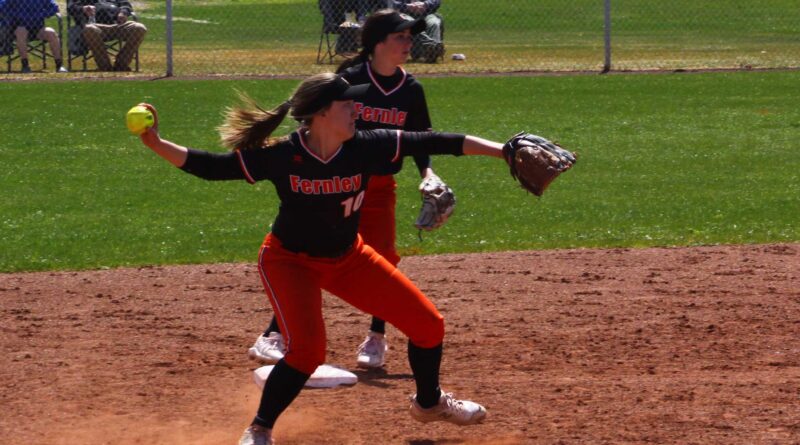 Facing a two-run deficit with two outs, nobody on base and two freshmen due to bat, things weren’t looking so bright for the Fernley High School softball team in the bottom of the seventh inning of the first game of Saturday’s doubleheader against Fallon.

Mere moments later, the Vaqueros were dancing around home plate in celebration.

The Vaqueros rallied from behind twice to beat Fallon 14-13 in the first game of Saturday’s doubleheader, then made it a sweep of the doubleheader and the three-game series with a 5-3 win in the finale. They beat Fallon 6-4 in the first game of the series Friday afternoon. The Vaqueros are now 10-0 overall and 9-0 in the Northern 3A, win a one-game lead in the 3A East standings over Spring Creek and Lowry.

Mackenzie Depaoli’s two-run double capped the game-winning rally in the seventh inning of Saturday’s first game, after they had come back from an 11-1 deficit.

In addition to posting three wins against one of the other best teams in the league, coach Diane Chapin said beating Fallon three times, and rallying from such a large deficit, is also big for the team’s confidence.

Fernley got two runs in the bottom of the fourth, one on a wild pitch and the other a double by Hunter Lyle, then tied the game in the fifth on a two-run double by Braelyn Birkle. In the bottom of the sixth, Depaoli doubled in the go-ahead run, then scored on an error on a ball hit by Nadia Velasquez.

Saturday, Fallon scored five times in the first inning and six more in the second to lead 11-1. The Vaqueros chipped away with two runs in the third and four in the fourth, then staged dramatic rallies in the last two innings.

Trailing 11-7 in the sixth inning, the Vaqueros got a run on a fielder’s choice on a ball hit by Harer, but still trailed 11-8 with two outs. Depaoli singled in one run, Velasquez singled in another, and Haeley Diehl Lea hit the game tying single, driving in Depaoli with the tying run.

Fallon struck right back with two runs in the top of the seventh.

In the bottom of the seventh Starr Schennum singled to center to open the inning, but the Greenwave turned a hard line drive hit by Mackenzie Viehland into a double play.

With two outs and nobody on base, Kacie Harer singled to keep hope alive, then the two freshmen came through. Hunter Lyle singled to move Harer to second, then Sara Moffett looped a fly ball down the right field line that glanced off the glove of the Fallon right fielder and send Harer scrambling home. Depaoli then came through again, with a single that scored Harer and Moffett with the tying and winning runs.

“Their pitcher struggled late, and our pitcher struggled early, which I’d rather have that and give us an opportunity to come back,” Chapin said. “One through nine has got to be able to come in and step up when we count on them.”

The Vaqueros carried the momentum into Saturday’s second game. The went up 2-0 with single runs in the first two innings. After Fallon scored twice in the top of the third, the Vaqueros answered back with one run in each of the third, fourth and sixth innings. An RBI-double by Lyle in the sixth gave the Vaqueros an insurance run, and Depaoli made it all stand up, pitching seven innings with 12 strikeouts and 2 walks, allowing three runs, two of them earned, on five hits.

The Vaqueros don’t play again until April 14 in the Spring Jamboree in Las Vegas against Brawley, Calif.