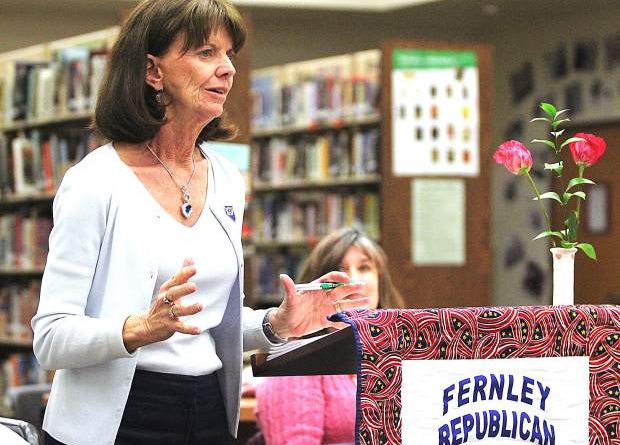 Assemblywoman Robin Titus confirmed Tuesday at the Fernley Republican Women’s monthly meeting she is running for re-election for District 38.

“I am running for office as a sense of duty,” said the Smith Valley Republican, adding she thought it’s the right thing do.

She won her last term by capturing 67.5 percent of the vote over George Dini’s 24.3 percent.

First elected in 2014, Titus, a physician for almost 34 years, represents most of Lyon County and all of Churchill County. She graduated from Smith Valley High School in 1972 and attended the University of Nevada, Reno where she earned both her bachelor’s and medical degrees. Originally a chemical engineering major, she decided to enter medical school, instead, because she wanted to be a partner with the residents in the Smith Valley area and serve them.

During her two sessions in the Nevada Legislature, she has received the Taxpayer’s Best Friend award, an honor she touts.

“I do what I feel is right for my community and state,” Titus said.

Her major committees from the 2017 session included Health and Human Services; Natural Resources, Agriculture, and Mining; and Ways and Means. Although the primary election is in June and the general election in November, Titus said if re-elected, she would like to continue serving on Ways and Means because the committee can hold people accountable with their spending.

During the meeting with the FRW, Titus outlined three goals she would like to accomplish during the 2019 session.

In 2017, the Legislature introduced 1,077 bills, a number she said is difficult to manage. Out of that number, the Assembly introduced 522 bills and the Senate 555.

“Of those, 500 were passed, and of those, 41 were vetoed,” she said. “Fifteen were vetoed, and we will re-introduce those (in the 2019 session). We’re allowing too many bills, and too many laws get written that we need more time to understand and not enough time to pass.”

Each returning senator may introduce 20 bills, while first-year senators are entitled to 10 bills. Returning assembly members may submit 10 bills, and five bills from new members of the lower chamber.

“That’s way too much. This is crazy,” she said.

Titus held up a thick paper-bound book that included a synopsis of each bill from the last session. She considered the information either a good night of reading or a nightmare, a comparison that drew laughter.

Titus is concerned about spending priorities. During the last session, the Legislature passed a $7.9 billion budget with 51 percent going to education and 3.15 percent destined for Health and Human Services. Titus then pointed to only 1 percent allowed for infrastructure.

“I would like to see more shift to infrastructure,” Titus said.

Since 1980, Nevada has experienced explosive growth. For example, Titus said the state’s population was 504,000 residents, and the budget was only $500 million. Now, almost 3 million people live in Nevada with a budget nearing almost $8 billion. Titus said that’s a six-fold increase in population compared to more than a 20-fold jump in spending.

“We are the most urbanized state in the nation,” she said. “Our population cluster is in two major population centers, Reno and Las Vegas.”

She said the state’s demographics are changing, which means the urban needs are much different than those in the 15 rural counties. Some legislators from the population areas, Titus said, don’t understand what the two regions require.

“I feel rural counties are relevant, and it’s hard to get that across,” she added.

Titus said she would like to see if money for education is being spent wisely. With millions of dollars spent on K-12 education, Titus is still concerned the increase in graduation rates in the two largest counties is under 3 percent whereas the graduation-rate increases were significantly higher.

“I am representing you, and I want to know where the money is spent,” she said.

Titus is also a strong proponent of post-secondary education and said community colleges should be a priority. She said not all students will attend a four-year university, while the two-year education institutions such as Western Nevada College, which has campuses in Carson City, Fallon and Douglas County, are more involved in Career and Technology Education because of the region’s expanse into these fields.

“For our career development, community colleges are the key to our economic development,” she said, “We need skilled workers.”