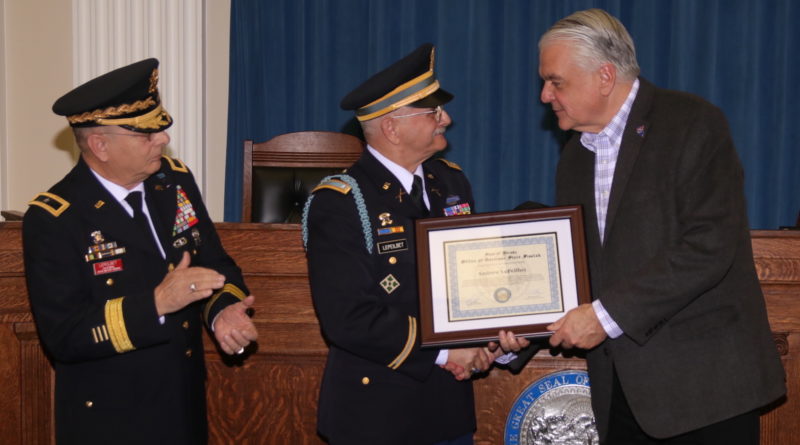 December’s Veteran of Month cited for heroism during Vietnam War

The forbidding jungle, hot and steamy on an early March day, shrouded the movement for the North Vietnamese Army as they infiltrated the border from Cambodia to South Vietnam’s Central Highlands. A platoon from the U.S. Army’s 4th Infantry Division patrolled the Plei Trap Valley, nicknamed the “Valley of Tears” and described as a “tortuous place” with steep mountains, low-hanging misty valleys and dense jungles that prevented the sunlight from penetrating through the gnarly vegetation.

More than 50 years ago on March 3, 1969, platoon leader 1st Lt. Andrew LePeilbet’s men faced hostile fire from the NVA, not knowing the strength of the enemy shielded by dense vegetation. Pinned down by grenade and small arms fire and butted against a river, the platoon couldn’t escape or maneuver to avoid the firefight. Soldiers remained in a defensive posture, slowly inching their way over the ground. LePeilbet, a young 22-year-old officer from Placerville, Calif., who loved to rodeo as a kid, crawled closer to the enemy’s position to silence their machine-gun fire.

“We had a lot of enemy fire trying to escape,” LePeilbet recalled of the operation. He then radioed for a Napalm drop. “An F-4 pilot delivered it, and within seconds it felt like we stuck our heads in an oven.”

Once the platoon received clearance, soldiers then swept the area looking for survivors.

For his bravery, LePeilbet, who lives in Reno, received the Silver Star Bronze Oak Leaf Cluster for his courage and leadership in protecting his platoon. The issuance of the award, though, wasn’t discovered until four years ago, but the Nevada Department of Veteran Services and Gov. Steve Sisolak honored LePeilbet with the presentation of the Silver Star in addition to recognizing LePeilbet as December’s Veteran of the Month. The Nevada Department of Veterans Services also named Sparks Councilman Paul Anderson as Veteran Supporter of the Month.

After Googling his name on the internet four years ago after a co-worker suggested personal search, LePeilbet discovered he had been awarded both a first and second Silver Star a half-century ago, but the information only described the lieutenant’s second award issued in September 1969. A note indicated the award had been marked classified for a number of years.

“I have no idea why,” LePeilbet said of the classification, which seemed odd to him.

As a result of the unknown status on the first Silver Star, LePeilbet enlisted the assistance of NDVS director Kat Miller and Congressman Mark Amodei’s office to research the status.

In addition to receiving the Silver Star, LePeilbet has also been awarded the Distinguished Service Cross, the Bronze Star, the Purple Heart, the Air Medal and the Department of the Army Commendation medal. His unit also received the Cross of Gallantry with Palm award, the Presidential Unit Citation with one Oak Leaf Custer, the Vietnamese Cross of Gallantry with Palm and the Civil Action Honor Medal.

In civilian life, LePeilbet rose to vice president of U.S operations and also managing director of Internal Operations for worldwide corporations. He is presently a realtor with Coldwell Banker Real Estate.

In his comments on the Veteran of the Month award, Sisolak noted LePeilbet’s involvement with veterans in Northern Nevada and recognized his affiliations ranging from the American Legion, Disabled American Veterans, the Sierra Chapter 989 Vietnam Veterans of America and the Military Order of the Purple Heart. In another major firefight with the NVA on March 12, 1969, shrapnel penetrated LePeilbet’s spine and pinched his nerves. Once released from medical care almost four weeks later, LePeilbet was reassigned to the battalion’s S-5 section (Civil-Military Operations) that performed psychological operations and civil affairs.

Sisolak said both awards are well deserved, and the Silver Star is long overdue.

As this month’s Veteran of the Month, Sisolak remarked on LePeilbet’s work for veterans during legislative sessions.

“In 2013, Andy joined the UVLC (United Veterans Legislative Council) and has actively attended state legislative sessions, testifying and helping provide information to the Nevada Assembly and Senate on legislation affecting Nevada veterans,” Sisolak said. “Andy worked in Carson City with other unpaid lobbyists actively supporting the interests of veterans and active duty military members. In 2018, Andy was appointed to the board of the directors and continues in that role today.”

Sisolak said LePeilbet assumed the role of legislative liaison with the VVA 989 and continues to keep the chapter informed on pending legislation.

George Malone, commander of the Legion of Honor, also recognized LePeilbet by giving him a miniature medals uniform rack. He said the Silver Star, the Distinguished Silver Cross and the Medal of Honor are three of the highest awards a military member can earn.

The respect between brothers became apparent during the ceremony.

Retired Army Brig. General Michael LePeilbet of Sacramento, Calif., said his older brother received the Silver Star on a special day 50 years ago, but he also remembers another special day in the 1980s.

“Andy earned this award on my birthday in 1969,” the general said, referring to the Silver Star. “When I became a first lieutenant, he came down to the promotion ceremony and pinned his first lieutenant bars on me.”

Likewise, the general said it was fair play when he pinned the Silver Star on his brother.

Andrew LePeilbet said he was humbled by Friday’s ceremony and awards.

This month’s Veteran of the Month shed light on Andrew LePeilbet’s heroes who attended the December ceremony, including his wife Lynn, a Vietnam War Hamburger Hill survivor and a Marine who fought at the Battle of the Chosin Reservoir in Korea in December 1950.

Gen. LePeilbet, though, said Nevada and California need people like his brother, who commanded 34 men in Vietnam and brought all of them back alive.

Sisolak said Anderson has taken the lead on the Truckee Meadows Mayor’s Challenge Team, which fights against suicide among veterans and their families. After a trip to Washington, D.C., Sisolak said Anderson discussed how the Mayor’s Team, the city of Sparks could work with other stakeholders to promote the importance of mental health.

“Councilman Anderson represents our Challenge Team in board meetings and a variety of community events in a message of suicide-prevention, social support and ensuring our veterans are connected to their communities and the services are available,” Sisolak said.

The governor also said communities have benefitted from Anderson’s strong, passionate and caring leadership and how he educates himself on a number of issues.

“Councilman Anderson works at both the national and local levels to discuss and collaborate with community stakeholders of promoting the importance of mental health, learning how to identify our military population and educate our communities in how we can support a military population better and more effectively,” Sisolak said. “Councilman Anderson has attended presentations and meetings supporting the Mayor’s Challenge to the Air National Guard 152nd Wing on mental health resiliency and first responders. Paul has also supported Nevada’s Gold Star Families at the dedication of the memorial placed at the Northern Nevada State Veterans Home.”

Anderson said the Mayor’s Team has been a team effort to make a difference in people’s lives. He asked those in the audience who have been part of the team’s efforts to stand up.

“These are people who are working on behalf of our veteran, service members and their families,” he said. “We want to make a difference. The goal is to get the number to zero (number of suicides). That’s a pretty lofty goal.”

Anderson know the team’s work has hand an effect. He said at one of their meetings, a service member listened to the information and vowed to return to work and “have a conversation we never have had” about suicide awareness.

“We just have to hope we make a difference for all of you,” he added.