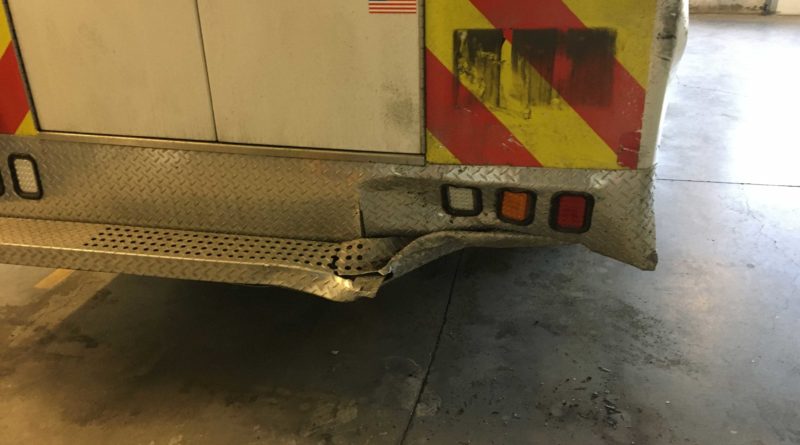 The North Lyon County Fire Protection District is waiting word from an insurance adjustor, while counting its blessings that nobody was injured, after one of its ambulances was hit by a vehicle and severely damaged Sunday evening.

The incident happened just as the ambulance crew was arriving on the scene of a single vehicle accident between mile markers 53 and 54 on Interstate 80 after dusk Sunday evening.

North Lyon Fire chief Jason Nicholl said the ambulance crew had just pulled up to the scene, and none of the firefighter/EMT’s had gotten out of the vehicle when it was struck from behind by a vehicle that had spun out on the icy highway.

“I was about 200 yards or a quarter of a mile behind them, and I saw was headlights spinning,” Nicholl said.

Snow was blowing across the highway, limiting visibility, and conditions were extremely icy, he said.

Nicholl said the ambulance had just stopped on the shoulder of the left lane and the driver put the rig in park, when the EMT in the passenger seat looked at his rear view mirror before opening the door. At that instant, the ambulance was hit from behind by a car. The rear driver’s side door area of the car hit the back right corner of the ambulance. The car then spun and scraped alongside the ambulance, and continued to slide until stopping off the right hand shoulder of the highway, about 100 feet from the ambulance.

A car that had rolled over was in the median where the ambulance had stopped, and a truck had jackknifed just a little way ahead, Nicholl said.

“It’s a whole lot of not paying attention,” Nicholl said.

Nicholl said district crews had just undergone a refresher training course a few days before on incident protocol, including where and how to park the rig on the interstate, and the procedures before getting out of the ambulance.

“Imagine if he had been standing right here,” Nicholl said of the EMT while showing how the car scraped the side of the ambulance as it slid past. “I really hope people pay attention.”

The ambulance, Rescue 61, is the district’s newest ambulance, and will be out of service until it can be repaired, or if necessary, replaced, which Nicholl said could be three to four months.

The right side of the rear bumper is smashed in, but more concerningly, Nicholl said it appears as if the box has been lifted off the frame and the hydraulic system isn’t working properly, and it is yet to be determined if the driveline and frame are salvageable.

“The damage never looks that bad, but these things are so heavy, they absorb a lot of energy,” Nicholl said.

A replacement would cost between $170,000 and $210,000, Nicholl said. Much of that cost would be borne by the other driver’s insurance, but many policies have damage limits far less than the cost of a replacement ambulance.

“The worst part of that is, we have four ambulances, and this puts us down one rig, and it’s our newest rig,” Nicholl said.

The good news, Nicholl said, was that nobody was injured.

After the collision, Nicholl said the ambulance crew got out and tended to the victim of the original rollover accident, as well as the driver that hit the ambulance, and put them both in the ambulance until a second unit arrived on scene.

“I’m just proud of our guys that jumped on the other people involved without missing a beat and without taking inventory of themselves,” Nicholl said. “We take our job for granted, and there becomes a level of comfort with danger, I hate to say.

“It’s a good reminder to keep our heads on swivels and follow safety protocols, and our guys did,” he added. “It worked out.”

One thought on “Ambulance hit by vehicle, severely damaged”