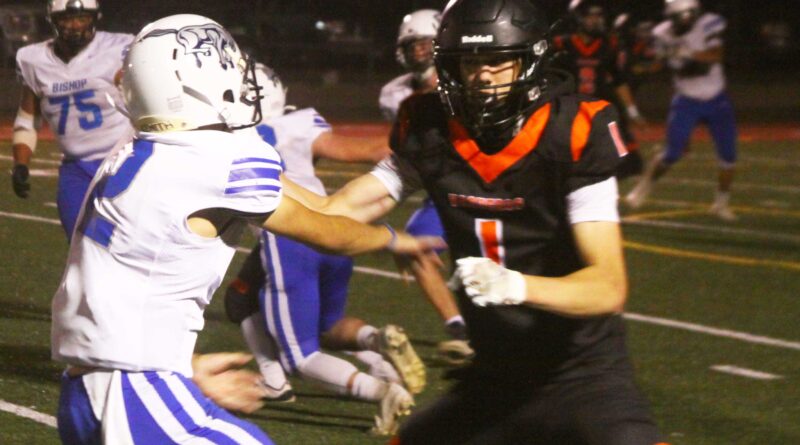 When the Fernley High School football team convenes again next week, it will be preparing for what would have been the halfway point of this season. Instead, they will be hoping to play just their second game of the season.

For the third time in four weeks, the Vaqueros had their game canceled this week, this time because of Covid issues within the Vaqueros program. The Vaqueros were scheduled to host Sparks Friday night, but on Wednesday morning, Sparks coach Brad Rose posted on social media that his team was looking for an opponent for Friday night. Fernley coach Chris Ward confirmed that his team was unable to play, and instead, Sparks lined up a game against Incline.

That leaves the Vaqueros with just one game under their belts as they enter the fifth week of the season. If they are able to play next week, the Vaqueros are scheduled to play at Wooster next Friday.

In their only outing of the season so far, last Friday against Bishop (Calif.) Union, the Vaqueros looked like a team with a lack of game action. On top of that, the Vaqueros hadn’t been able to practice outdoors very often during the previous three weeks, and Ward said that showed with a lack of conditioning.

The Vaqueros started the game on fire, then fizzled out quickly and wound up losing to Bishop, 42-22.

Fernley scored on its first two possessions, needing just six plays to eat up 64 yards on the first drive and two plays, with a facemask penalty tacked onto the first one, to go 65 yards for the second score. The first drive ended in a 16-yard touchdown run by quarterback Julian McIntyre, and Emiliano Alonzo scored on a 16-yard run on the second one.

But the Vaqueros trailed 42-14 before the scored again, on a 9-yard run by Traven Cassinelli with just a couple minutes left in the game. The stadium scoreboard and clock were inoperable throughout the game.

After moving the ball with ease their first two possessions, the next three possessions for the Vaqueros ended with a fumble, a missed fourth down conversion and another fumble.

Bishop, meanwhile, failed to score on only one of its first half possessions, and took a 28-14 lead into the half. The, the Broncos needed just five plays to go 63 yards with the first possession of the third quarter to take a 35-14 lead, and Fernley never regained any of the rhythm they enjoyed in the first quarter.

Bishop came into the game having scored 108 points in its first two games, while the Vaqueros hadn’t played a gainse, and had mostly practiced in the gym in the three weeks leading up to the game because of smoke from California wildfires. Ward said Bishop may end up being the best team the Vaqueros face.

“That’s a solid team and I think we’re going to be just fine,” he said. “They won their section in 2019 and, man, I’ll be surprised if they don’t win it again.”

Although their offense bogged down after the first quarter and the defense was unable to get stops, Ward said he was most disappointed by the Vaqueros mistakes. They fumbled several snaps, committed several penalties and played with a lack of discipline at times. One player was ejected after the referee said he threw a punch in retaliation for a late hit penalty.

“We can’t be acting like dummies out there when we’re down,” Ward said. “Yeah, we’ll clear that stuff up.”

Before the game, Ward lamented that because of the cancellations the first two weeks, he didn’t yet know how good the Vaqueros are. Despite the loss, he came away encouraged about their potential, if they get to play consistently.