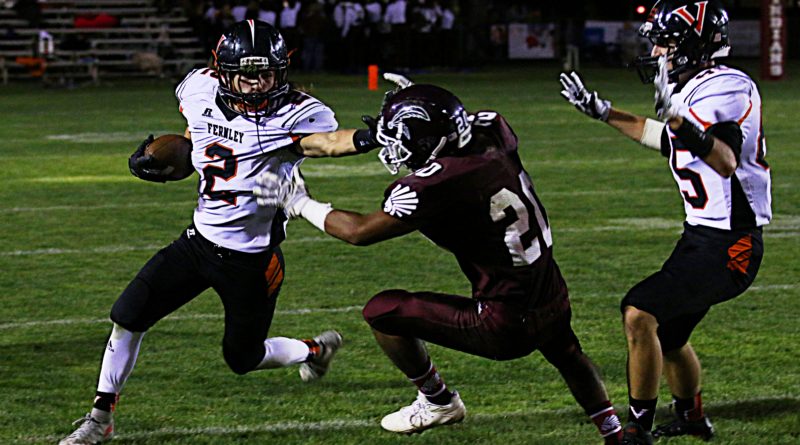 ELKO – The Elko football team has gotten too good at placing themselves in difficult situations the past few weeks, but the Indians found a way once again Friday night — using a defensive touchdown in the fourth quarter to beat Fernley 20-17.

The Indians went down the field on their opening drive of the game — not with the run — passing the football.

Junior tailback Gavin Byington capped the drive with a tough, 25-yard run — breaking tackles and hitting the gas pedal before diving in with 7:15 remaining in the first quarter.

The extra point was missed but Elko led 6-0.

The Vaqueros used the running of senior Sam Ramirez and AC Reyes at tailback, coupled with the option attack of junior quarterback Zach Burns, to move the ball to near midfield before being stopped on the third down.

Fernley lined up to punt the ball, but Ramirez saw the Elko defense retreat and picked up the first down with his legs.

The second quarter began with the Indians notching another third-conversion in the air on a completion from senior quarterback Eric Klekas to Freitag.

Disaster struck as the snap from center sailed way over senior quarterback Emmitt Johnson’s head, and the Vaqueros swarmed the backfield and recovered the loose ball deep in Elko’s territory at the 11-yard line.

On 4th-and-5 from the 6-yard line, Fernley scored a virtual walk-in touchdown on an option play.

Burns sold the play like he was going to run and drew the Elko defensive end down the line, and then flipped the ball to senior Nathan Henderson — who went in untouched.

The snap on the extra point went awry, and a scrambling Ramirez launched an incomplete pass.

On Elko’s following drive, the Indians moved the ball downfield by drawing to pass interference penalties, with Freitag and senior Kyrin Allen each coaxing the laundry to be thrown.

Johnson kept the ball and carried it to the Fernley 28 after a lengthy run, but the Indians were dropped for a short gain and committed a delay of game penalty — moving back to the 32.

After an incomplete pass, Klekas connected with Allen for a 32-yard touchdown down the seam.

Klekas ran in the two-point conversion, and the Indians grabbed a 14-6 lead with 6:07 remaining in the half.

Fernley picked up a first down an swing pass to Henderson as he came in motion, and Ramirez moved the chains again after a nasty stiff-arm.

The Vaqueros picked up a third-down conversion on a pass from Burn to junior Russell Ortiz, and Ramirez made a long run on an option play that Elko fooled.

Fernley set up shop at the Elko 14, but the Vaqueros were called for holding.

The Elko defense forced fourth down, but Ramirez knocked in a 36-yard field goal with two minutes remaining in the half.

The game went to the break with Elko holding a 14-9 lead.

Allen forced a fumble and Elko took over on the Fernley 37 to start the third quarter, but the drive ended when the Indians were picked off at the Fernley 5 on 4th-and-5 by junior Tyler Dennis.

The Vaqueros moved the ball with their read-option approach on solid runs by Ramirez, Reyes and Henderson — but the biggest plays of the drive came courtesy of senior wide receiver Ren Arroyo.

On 3rd-and-11, Burns rolled out of the pocket and found Arroyo coming across the middle to the left side for a gain of 30 yards to the Elko 36.

Arroyo took an end-around, threw in some shake-and-bake and reversed field for a 22-yard gain from the 28 to the Elko 6.

Junior Willy Pritchard punched through from six yards out, and Ramirez packed in the conversion — giving the Vaqueros a 17-14 advantage.

Fernley took over after junior Gabe Richards came up with a sack on third down and an Elko punt only traveled 29 yards after a generous roll.

The Vaqueros moved the ball to the Elko 15 on a big 3rd-and-7 catch by Ramirez from Burns, but seniors Luis Salazar and Trevor Basaraba bailed the Indians out with a seven-yard loss when they dumped Reyes in the backfield on a swing pass.

Elko was stuffed when they took over on downs, but Byington’s punt was a low line drive — and the Indians benefitted in a big way.

A retreating return man should have left the kick alone, but he tried to scoop it up and Basaraba pounced on the loose ball, coming out of the dog pile with the pigskin.

Elko gave the ball right back.

The Indians were picked off at the Fernley 1 with 6:16 remaining in the game.

The high-school mistakes mounted, each trading miscues — one determining the game.

An ill-advised pass was picked off by Allen at the Fernley 15, and he took the rock to the house — sending Elko fans into a frenzy and the Fernley fans into a comatose state.

The Indians forced a turnover on downs on Fernley’s next possession, using huge stops on run plays by Salazar and Basaraba on first down and Yopps and junior Antawn Valtierra on second.

Third and fourth down passes fell incomplete, and the Indians regained possession and never gave it back.

The Indians used the legs of Johnson and Byington to advance the ball to the Fernley 2.

Elko was pushed back and committed a penalty, but Fernley did not have any timeouts remaining.

The Indians ran out the clock, snatching victory from the jaws of defeat and improving to 4-0 in league play of the Division 3A North.

Elko will take to the road next week, playing one of the best teams in the league.

Fernley will try to get back in the win column after two consecutive losses when they host Sparks Friday at 7 p.m. The Indians will attempt to reach 5-0 at 1:30 p.m. Saturday in Truckee.

“Overall, we had a good game. Defensively, we were very solid,” coach Gary Stone said. “The boys studied and we’re ready for Elko’s offense. Elko was well coached and they had good athletes. Offensively, we played well other than too many false start and illegal motion penalties. We will coach that up this week and be ready for next game. Hunter Bard kicked a 35 yard field goal. Fun game. We are very proud of the team.”