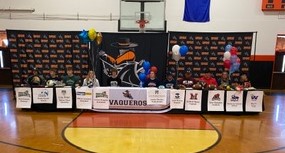 As they matriculate to their respective campuses this month, a dozen recent Fernley High School graduates are joining the ranks of former Vaqueros continuing their athletic careers in college.

One, wrestler Nathan Glass, will be competing at the NCAA Division I level, and one, Aurora Parsons, will be a two-sport athlete. All of them are realizing the dream of playing in college they’ve had since they were little

Gamsby is originally from Redding initially, and said Shasta College was attractive to him in part because he still has a lot of family I the area.

Gamsby was a shortstop and pitcher for Fernley, and hopes to get time at both positions in college.

Although playing soccer in college has been Garrett’s goal since he started playing the sport, he said it didn’t seem like a realistic possibility until the past year.

“I didn’t really expect the opportunity,” he said.

But when Finlandia coach Scott Chrysafidis reached out to him, Garrett said he immediately liked his vision for the team and what he’s trying to put together. After growing up in Fernley, he was also looking for a change of scenery. Garrett said the Finlandia coaches envision him as a center attacking midfielder.

“I should get good playing time there as a freshman,” he said.

After finishing second in the state Tournament as a sophomore in 2019, Glass decided to quit football and focus solely on wrestling, and the reward was a state championship last winter, and a scholarship to Cal Poly. Glass also wrestled for the Silver State Wrestling Academy in Reno, and it was after a tournament in North Carolina when he first met the Cal Poly coaches. A few months later, he got a call inviting him for an official visit.

Glass went 30-5 with 23 pins as a senior and won the 220-pound state championship, but he said the improvement he made in the year following his sophomore year is what earned him the chance to wrestle in college.

“After I got second at state things just became more clear to me,” Glass said. “I was getting emails from coaches left and right.”

Jacobson also decided to concentrate on a single sport, quitting basketball to focus on volleyball as a senior. She averaged 3.9 kills and 2.2 digs per set as an outside hitter for the Vaqueros her senior season.

“It was a super tough decision for me, especially growing up playing basketball, that was my main sport,” Jacobson said. “But then I got injuries and I just figured my best shot was volleyball.”

Jacobson said her family frequently vacations in Oregon, and she immediately fell in love with the campus and liked the coach when she went to Klamath Falls to visit the campus. She was recruited to play outside hitter and said her goal is to start as freshman.

“It was always my goal, I wanted to go play basketball or volleyball,” she said. “Now I’m super excited and I can’t wait.”

Kingston was a star in football and basketball for the Vaqueros, and fielded offers in both sports, but ultimately decided to stick to hoops.

“I considered football, but I don’t want get beat up, and basketball is my favorite sport,” he said.

After reviewing all his options, Kingston decided Shasta was the best fit for him. He said he made good connections with the coaches and players, and he likes the campus and the environment. He hopes to continue his career elsewhere after two years at community college.

Parsons, who won the girls discus and was fourth in the shot put at the 3A State Track & Field Championships in May, will add the javelin and hammer to her repertoire as a college thrower.

High school competition in Nevada doesn’t include the javelin or hammer, but Parsons started throwing it as an unattached competitor in AAU meets two years ago.

In addition, she will also be joining the soccer team, becoming a rare two-sport college athlete,

“Soccer was my first sport, but it was never really a thought to go play (in college) until coaches started reaching out in December,” Parsons said.

But the primary reason she drew the attention of college coaches was her prowess in the throws.

“The coach bringing me in really wants me to improve their throws program, and the soccer coach said I will be a strong midfielder,” she said.

Reeves fell in love with baseball from the time he first started playing Little League, and wasn’t ready for his career to end when the Vaqueros lost in the Northern 3A Region Tournament.

As a catcher, he was one of the leaders of the Vaqueros team that finished first in the Northern 3A East Division. He finished his Fernley career with a .328 batting average and .455 on-base percentage, batting .347 as a senior.

He chose Valley Forge over a couple of other offers and expects to compete right away to be the starting catcher. He said signing his letter-of-intent was a relief after a stressful process.

“It was so stressful dealing with getting all the papers, just getting everything planned out,” Reeves said.

A first-team All-League, All-Region and All-State offensive lineman as the starting center for the Vaqueros as a senior, Reyes will now be snapping the ball for Mt. San Antonio College.

Reyes said Mt. Sac was the first team to show him legitimate interest, and even after other schools began to reach out, he never wavered about his decision to play there.

“I had a couple other offers, but I really like them, it felt like a home feeling as soon as I got there,” he said. “They have the best facilities, and that’s what I’m going to be looking for.”

Even though he always wanted to play football, Reyes said he knew his senior year was “time to get to work” in order to make it happen.

“I feel I’ve worked extremely hard for this and it’s paying off,” he said.

The 6-4, 270-pound Slaughter was the All-League, All-Region and All-State Lineman of the Year as a guard and a defensive tackle for the Vaqueros. With many connections between the Fernley and the Montana Western football programs, he said signing there was an easy choice.

At Montana Western, Slaughter said he could end up at defensive end, tight end or linebacker, where he can use his speed to explode off the snap.

“I don’t even watch professional football, I watch college football, and ever since third grade I wanted to be a college athlete,” Slaughter said. “I knew I had the drive, I knew I could do it, so now that I’m here it just feels great.”

As a sprinter, Yi is used to getting to where he’s going in a hurry. While the process of choosing a college was more like a distance race, Yi will be comfortable back in the blocks running the 100 and 200 meters and the 4×100 4×200 meter relays for the Warriors. Those were his events at Fernley, where he also ran the 4×400 relay.

Yi said growing up he wanted to play a college sport and it was his online recruiting profile that caught the attention of Waldorf coaches, and he wound up choosing them because it was the best financial package he was offered.

“They came to me first, they just had the bigger amount,” Yi said.

Yi plans to major in sports science so he can become a coach, and while competing in college is a dream, he said it’s only partially fulfilled.

“A dream come true would be like a D-1 full ride, but small steps,” he said

Viehland’s journey from an 8-year old dreaming of playing college softball to a high school graduate getting ready to do it had a few curves in the road.

“A few years ago, I didn’t think I was going to be able to do this, I didn’t love the sport anymore”,” Viehland said. “But I started to re-love it and I’m here now. It’s a chance to show some of my coaches that never believed in me that I could do it and I’m here now and I have the support of all the people behind me.”

Viehland was a pitcher, first baseman and sometimes outfielder for the State Champion Vaqueros, and foresees the same kind of role at Sterling.

But even after falling out of, and then back in love with softball, and winning a state title, Viehland said it took months for her to sort between 12 colleges and pick the place for her next chapter.

O’Neill will be heading to Chaminade as a freshman, but he’s already familiar with the college soccer atmosphere, having spent the spring at Grand Canyon University in Phoenix, Ariz. O’Neill moved to Phoenix after his junior year to play for a club team, Phoenix Rising Youth, and graduated early from Fernley High School through Lyon County’s online program.

But in March, when Grand Canyon coach Leonard Griffin left to become head coach at Cal, O’Neill said new Grand Canyon coach Mike Kraus urged him to transfer. O’Neill entered into the NCAA transfer portal, and found his way to Chaminade, which itself has a new coach, Joshua Woodard.

At Chaminade, O’Neill will play the 6 position, which is a defensive midfielder. He said his plan is to immediately earn minutes, and his team goals are to be the best team in Hawaii and to finish with a better than .500 record.

“I just have to go there and work for it,” he said. “I’ve got a lot of respect of the best players in the country and I realize how much harder you have to work in college.”

Before moving to Phoenix, O’Neill played on a club team in Reno, NV United, that was ranked No. 1 in the country and all of the players have signed to play in college.

O’Neill plans to major in communications and marketing and potentially get his MBA, and he said dreams of playing at some level professionally are not out the realm of possibility.

“I would say it’s not out of the mix,” he said. “I have to focus on the day-to-day, but I definitely think it’s possible.”