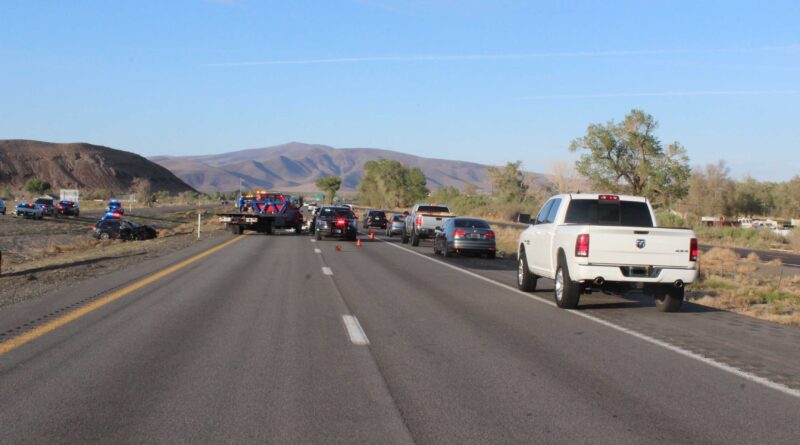 A Yerington man has been identified as the wrong-way driver who was killed in a head-on collision May 7 on Interstate 80 near Wadsworth.

According to the Nevada State Police, Highway Patrol Division, Troopers responded at 3:56 p.m. May 7 to reports of a vehicle traveling east on I-80 in the area of USA Parkway that was failing to maintain its travel lane on multiple occasions. A trooper located the vehicle on I-80 in the area of mile marker 47 in Fernley.

The Trooper attempted to make a traffic stop on the vehicle, guiding the vehicle to the right shoulder and bringing it to a stop. The vehicle then made a U-turn on the highway and began driving the wrong way on I-80, westbound in the eastbound No. 1 travel lane. The State Police says the preliminary investigation indicates the vehicle, a white 2007 Ford Fiesta hatchback, was traveling west in the eastbound No. 1 travel lane approaching Washoe County mile marker 43. A black Jeep Grand Cherokee was traveling east on I-80 near Washoe County mile marker 43 in the No. 1 travel lane.

The driver of the Ford was identified as Alexander Richard Emm, 20, of Yerington. He died from his injuries from the crash and was pronounced dead at the scene. The driver of the Jeep was transported to an area hospital with non-life-threatening injuries.

Prior to hitting the Jeep, the Ford nearly hit a North Lyon County ambulance, which swerved to avoid a collision and sideswiped a tractor-trailer.

Impairment is suspected in this crash. This crash is being investigated by the Highway Patrol Division’s Northern Command West Multi-Disciplinary Investigation and Reconstruction Team (M.I.R.T.) – Case #220500447. If anyone has any information about this crash, send an email to ncwmirt@dps.state.nv.us and reference the case number.