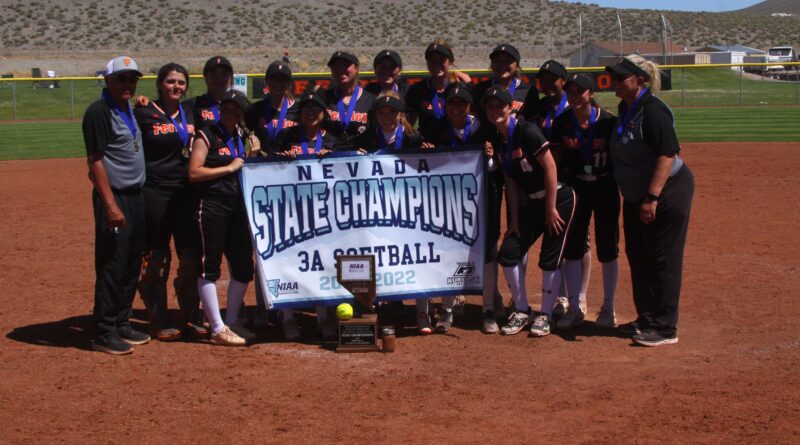 Fernley High School softball players and coaches were lined up for photos with the state championship trophy and banner after beating Virgin Valley in the 3A State Championship game Saturday afternoon when someone suddenly remembered something important.

A player went running into the dugout and emerged with a jar filled with dirt and a few blades of grass. The jar was placed on the ground next to the trophy, and now the scene was complete.

Playing on their home field, the Vaqueros defeated Virgin Valley twice on Saturday, winning 6-2 to force the winner-take-all final game, then claiming the 3A state championship with a dramatic finish to a 7-6 win. With a 7-2 lead having shrunk to 7-6, shortstop Braelyn Birkel threw out a runner at the plate for the final out of the game.

And with that, they lived up to the pledge they made when they filled that jar with dirt.

But it didn’t come easy, and almost didn’t happen at all.

After a double play erased a leadoff error in the top of the seventh inning, the Vaqueros were an out away from the state title. But that’s when things got hairy.

“Yes, it did,” coach Diane Chapin said. “We knew they weren’t going to go away quietly. They’d battled all year.”

First, Brooklin Montoya drew a walk, then Riley Price skied a popup between the pitcher’s circle and the third base line, but the ball landed fair in between three Fernley fielders, and Montoya wound up on third base, with Price on second. The Vaqueros intentionally walked Ana Tausinga to load the bases, but another walk forced in a run to make it 7-6, with the bases still loaded.

Price, who had moved to third on the last walk, wandered a little too far off the bag, drawing a pickoff throw from Fernley catcher Starr Schennum. But the throw bounced into shallow left field, and Price, who had dove back into the bag at third, got up and raced for the plate as Birkel, who was backing up the play from her shortstop position, picked up the ball and fired a strike. Schennum applied the tag, and as the umpire signaled the out, the Vaqueros raced from their defensive positions and out of the dugout to celebrate.

“I was not expecting that runner to get up and go, but I was there,” Birkel said. “Every time a ball goes to third, I’m there to back it up, no matter what, so I was there, she went, and I took my time and made a clean play.”

The Vaqueros jumped ahead early, scoring twice in the bottom of the first when two runs scored on an error on a fly ball to right field by Schennum, but Virgin Valley got two back in the top of the second.

With the bases loaded in the bottom of the third, Sara Moffett smacked a fly ball to the fence in right center for a triple that drove in three, making it 6-2, then scored on a ground out by Ciara Pritchard for a 7-2 lead, with the run that eventually proved to be the difference.

Virgin Valley clawed back, getting a run on a double by Destiny Moeai in the top of the fourth, climbing within 7-4 on a home run by Montoya in the fifth, and then making it 7-5 on a run-scoring single by Moeai in the sixth, which set up the frantic seventh inning.

“I was just so proud of my team,” said pitcher Mackenzie Depaoli. “We did our goal.”

The state championship is Fernley’s sixth since 2004, and the appearance in the championship game was the 12th since Chapin became head coach in 1996.

“I kind of attribute it to the kids,” Chapin said. “You get good kids, you get them to work hard and buy into what you’re teaching them, then they see success. We kind of just preach ‘do your best you’re capable of doing and you should be successful.’”

Fernley had won four of their previous five state championships at host schools in the south, and one in Reno, so for most of them they’d only had a handful of family and friends on hand. But playing at home, they were able to do it in front of a couple of hundred fans.

“The thing that made it even more special was being right here in Fernley, that even more people could experience it,” Chapin said.

At the beginning of the season, knowing they were going to host the State Tournament, each member of the team scooped up some dirt or grass from their defensive position and put it in that jar. The idea came from Pirates of the Caribbean.

“It was kind of an inside joke, so for this tournament in particular, we got our turf and put it in to defend it,” Birkel said.

When all was said and done, that’s exactly what they Vaqueros did.

“We defended our turf,” assistant coach Junie Estrada told them.