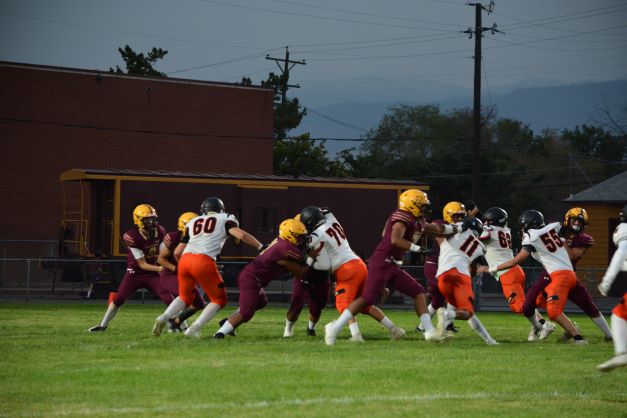 Whenever a Fernley quarterback walks up to the line of scrimmage to run one of the Vaqueros’ triple option plays, one of his first tasks is to identify the player, usually a defensive lineman or a linebacker, who will be his key read to determine what is going to happen on that play.

But last Friday, the way Sparks aligned its secondary prompted the Vaqueros to abandon its normal bread and butter, and instead, they feasted on ice cream and cheesecake.

The Vaqueros gashed the Railroaders for big yards time and time again on quick hitting toss plays to the outside, and mixed in some well-timed downfield passes to take advantage of the way Sparks was crowing the line of scrimmage to try to take away their inside running game.

The result was a dominating 48-17 win, in which the Vaqueros amassed more than 400 yards rushing and 500 total yards.

“Overall, very, very proud of this game,” coach Anfernee Sloan said. “I like the way that we were able to continue to play, kinda go about finishing it.”

Garrett Harjo and Marciano Montano each rushed for more than 100 yards, with Harjo amassing his 105 on just five carries, all of those on toss plays designed to get the ball outside. Sparks often lined up with 10 defenders near the line of scrimmage, and their single safety often only six yards off the ball.

“We got away from running the ball inside,” Sloan said. “They were definitely hyper aggressive with their safeties, we had the perimeter and they executed.”

“That’s the joys of this offense,” Sloan said. “They weren’t just playing the play, they were executing the play, and when you do that it’s a beautiful thing to watch.”

The Vaqueros scored four of the first five times they had the ball, jumping out to a 27-9 lead. The one drive that came up empty resulted in Sparks’ best highlight of the evening, when Mekhi Brown found himself in the right place at the right time. He got a deep enough drop on a post pattern to intercept an underthrown pass at his own 5-yard line, and he weaved his way through traffic and outran everyone for a 95-yard return touchdown.

Tollestrup and Keeshawn Love each had two touchdown runs for the Vaqueros, and Tristen Martinez added another. Tollestrup ran for 77 yards on 11 carries, Montano had 102 on 18 carries and Martinez added 65 on six carries.

Sloan said the win, especially coming after a frustrating loss a week earlier, helps breed confidence and momentum and with preparation going forward.

“I thought we were very relaxed in our approach, we were very consistent throughout the week, to come out and get the W in dominating fashion like we did, I think the is a pretty good thing, moving forward for this football program,” he said.