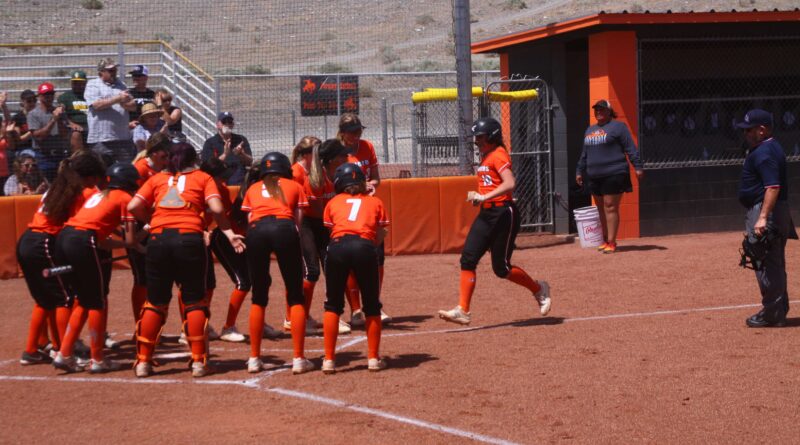 The Fernley High School softball team is in the Northern 3A championship game, but will have to win twice to claim the title.

The Vaqueros lost 2-1 to Virgin Valley in the winner’s bracket game Friday afternoon, but bounced back to beat North Valleys in an elimination game later in the day to set up the meeting with Virgin Valley, which reached the title game with their win over the Vaqueros.

Fernley trailed 2-0 into the bottom of the seventh inning, then loaded the bases with two outs. A passed allowed one run to score, and a walk loaded the bases again for Braelyn Birkel, who hit three home runs in Thursday’s first round game. But Birkel grounded out to third to end the game.

In the elimination game, the Vaqueros jumped to a 3-0 lead over North Valleys, only to see the Panthers rally back to take a 5-3 lead. But Fernley scored four times in the bottom of the sixth, and pitcher Mackenzie Depaoli retired the side in order in the top of the seventh.

Fernley will face Virgin Valley at 10 a.m. Virgin Valley would win the title if it wins, while If Fernley wins that game, the teams would play a second game.

After three close, low-scoring games last weekend in the Northern 3A Region Tournament, Fernley coach Diane Chapin said they forced the Vaqueros to work on small ball in preparation for this week’s State Tournament.

But in their State Tournament opener Thursday afternoon, the Vaqueros played long ball.

“We only hit three (home runs) all year, we weren’t expecting three from the same person,” Chapin said.

Birkel got the Vaqueros off to a good start, leading off the bottom of the first inning by smacking a 2-0 pitch over the center field fence for a 1-0 lead. Later in the inning, the Vaqueros made it 2-0 when a run scored on a ground out.

“Birkel got us going and motivated everybody,” Chapin said.

In the second inning, Birkel came to the plate with two out and a runner on first base, and with a 2-2 count, drove a line drive over the right field fence for a 4-0 lead.

Fernley then put six runs on the board in the fourth inning, three on Birkel’s third homer, a deep drive that dented the scoreboard above and beyond the right field fence, one on an RBI-single by Depaoli, and the last two on Viehland’s drive over the center field fence.

While the early lead helped the Vaqueros settle into the game, Chapin said the team was already pumped up for the tournament after a team dinner Wednesday night. Although they are playing at home, Chapin said they are having team meals as they would if they were playing on the road, to keep the feel and atmosphere of a State Tournament.

“We’re trying to make it a special experience for them,” she said.

Depaoli made sure Boulder City will have to wait to enjoy their State experience.

The Vaqueros will be back in action at 1:30 p.m. Friday against Virgin Valley, which beat North Valleys 8-3 in the second game Thursday.