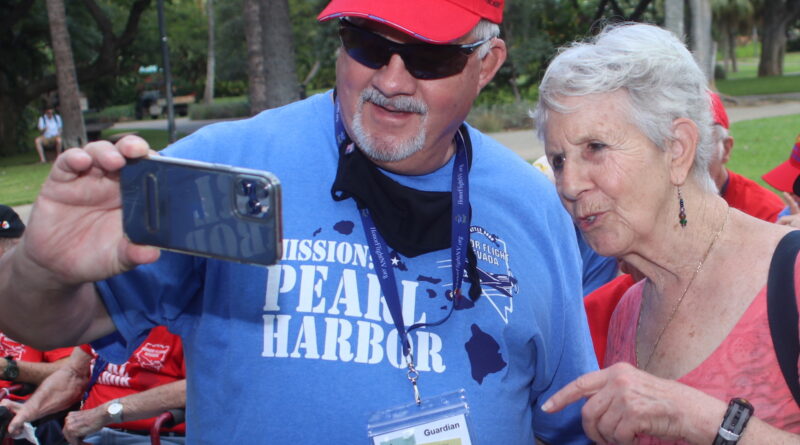 Ceremonies remember 81st anniversary of a surprise attack on Oahu

Hundreds of residents from the mainland United States are traveling to Honolulu this week not only to remember the 81st anniversary of the Japanese attack on Pearl Harbor but also to participate in holiday-themed events.

The anniversary of the surprise attack on Pearl Harbor plunged the United States into World War II after President Franklin D. Roosevelt asked Congress to declare war on Japan on Dec. 8 and Germany three days later. The National Pearl Harbor Remembrance Day is observed every year on Dec. 7.

Japanese pilots focused their attack on Battleship Row by severely damaging or destroying 19 U.S. Navy ships that included eight battleships. On that fateful Sunday morning, 2,403 U.S. military personnel who perished on the battleship USS Arizona and 68 civilians died in an attack that lasted less than two hours.

Seaman first class Richard Walter Weaver grew up in Fallon and enlisted in the Navy on Nov. 27, 1940, a year before the attack. His father Ray Weaver had seen the perils of war having fought in World War I about 22 years prior to his son joining the Navy. The older Weaver gave his son permission to enlist.

Another sailor from rural Nevada perished on Dec. 7. Richard Gill attended schools in Wells and Reno before earning a diploma from Montello High School. At the time, Montello was a small railroad town 50 miles northeast of Wells.

Gill also enlisted in the Navy in 1940 after working as a grocery clerk in a small market in Beowawe, which began in 1868 as a railroad town between Elko and Battle Mountain in northeastern Nevada.

Gray lady of the sea

The lore of the USS Nevada has been in the news this year by involving the University of Nevada’s football team. Not only did the Wolf Pack players have a symbol to indicate their defensive fumble recoveries or interceptions on the field, but they also learned the history of one of the greatest battleships during World War II.

Poseidon’s trident pictured with a tribute to the USS Nevada was revealed in August at the Naval Air Warfighting Development Center near Fallon with the creator of the design. John Galloway, director of the Battleship USS Nevada Remembrance Project, is keeping alive the history of both the battleship and World War II.

In his account of the USS Nevada, retired Lahontan Valley News owner and historian David C. Henle, said the ship gathered up steam, left its mooring and was attempting to reach the Pacific Ocean. The Japanese bombs proved so deadly that the ship’s officers, fearing the blazing and listing Nevada might capsize or sink in the channel, thus closing the waterway to shipping, beached her on the hard sea bottom.

As the tide began to rise, the battleship floated free after two hours of being beached. Fires continued to burn aboard the Nevada until late in the night and during this period, the injured and dead were transported ashore by launches from nearby ships and shore stations. Two Nevada crewmen were subsequently awarded the Medal of Honor and 15 received the Navy Cross for heroism during the attacks.

Following temporary repairs in Pearl Harbor, the Nevada, which was commissioned in 1916, was towed to the Puget Sound Navy Shipyard in Washington State to undergo a $23 million refitting and modernization that lasted seven and a half months.

By late 1942, the ship rejoined the fleet and saw action in the Aleutians and then convoy duty in the Atlantic where it participated in the Normandy landings and allied invasion of German-held Europe on June 6, 1944.

The USS Nevada returned to the Pacific theater in 1945 and supported the landings at Iwo Jima and Okinawa. The battleship was hit several times by Japanese “kamikaze” or suicide planes that crashed onto her decks, killing 14 and injuring 48 crew members.

Proud of his service

John Glimmerveen of Reno relived his war years of service during Honor Flight’s 2021 Pearl Harbor anniversary trip. For the 96-year sailor, he had the opportunity to tell his story a number of times to fellow veterans and journalists.

Glimmerveen, who is of Dutch ancestry, grew up in Visalia, a farming town south of Fresno, Calif., in the rich, agricultural San Joaquin Valley.  The opportunity to fight for his country enticed the 17-year-old away from Visalia.

“We were all poor, picked cotton and pitched hay,” he said.

Glimmerveen didn’t have far to travel for his first stop with the Navy. He completed boot camp in 1944 at the Naval Training Center in San Diego before receiving additional training at the Naval Amphibious Base in Coronado. Glimmerveen, along with other sailors, were learning how to drive the Navy’s landing craft vessels, also known as Higgins boats, which transported troops from ship to shore. Described as a shallow-draft, barge-like boat, it could ferry 36 men, about the size of a platoon.

What made the Higgins boats noteworthy was their construction with the sides and stern made of plywood and a light or thinly plated armor used as its shield. As seen from the various beach landings in the Pacific or during D-Day at Normandy, the Higgins boat carried the troops close to shore, and the coxswain, which Glimmerveen was, would lower the front ramp to allow the men to charge the shore.

The most fierce fighting occurred in 1945 as Marines and Army soldiers began their island hopping to wrestle control of territory held by the Japanese army. The last major battle in the Pacific involved the storming of Okinawa as part of Operation Iceberg with more than 180,000 soldiers and Marines taking control of the island from the enemy.

Glimmerveen recalled how the fighting began on Easter Day, April 1.

Glimmerveen’s landing craft dropped Marines off in the second wave, but he said he and the others didn’t face fierce opposition from enemy fire coming from the beach. From the day of the first assault, Glimmerveen said the landing crafts and their small crews anchored about 20-to-30 yards off shore.

“We were there for 10 days. That’s it,” he said, although the battle of Okinawa last until June 22 when the Japanese surrendered. “We went back to Saipan and Tinian Island (Northern Marianas in the western Pacific) to help get the first bomb. We were there three to our days, then they told us to go back to Pearl Harbor.”

After their arrival at Pearl Harbor, Glimmerveen said that’s when he and the other sailors eventually heard about the atomic bombs being dropped on Japan in August.

The heavy cruiser USS Indianapolis had delivered part of the first atomic bomb to Tinian Island, which is 1,600 miles south of Tokyo, in July 1945.  Sadly, after the USS Indianapolis delivered the atomic bombs’ internal components, a Japanese submarine torpedoed the cruiser between Guam and Leyte Gulf on July 30. Of the 1,195 sailors who went down with the ship, about 900 men became adrift in the shark-infested waters with a little more than 300 sailors surviving.

After the war, Glimmerveen returned to the United States, and in 1950 he married. In those days, he said his family “moved around” because of his job. He permanently moved to Nevada in 1987 about 30 years before his wife died in 2017.

As Glimmerveen reflects on the 2021 Pearl Harbor ceremony, he said he was fortunate to attend in person; however, his thoughts don’t end there.

“Our younger generation needs to remember Pearl Harbor,” he stressed. “We need better history classes for the younger people. Many don’t know too much about it… even the college kids.”

Veterans from last year’s Honor Flight Nevada also met a survivor of the attack on Pearl Harbor, Kathleen Koch, a 3-year-old daughter whose father was assigned to the U.S. Army Air Corps.

“We lived in brand new housing about three blocks where my dad worked,” she said. “I remember as a child they (the Red Cross) took my mother and me to the mountains, and we just played all day. They made us not afraid.”

Koch added her father was safe, although her mother worried Hawaii fall to the Japanese. The Forest Lake, Minn., resident said many of the veterans can recount the carnage that ensued from the Dec. 7 attack.

“They remember more than I do. When you are 3 years old, you’re just looking for the next sucker,” she quipped.

As she grew older, Koch said she gradually discovered what her father, the sailors, soldiers and Marines went through on that horrific day. She knows what her father faced, but he would never talk about it with his family.

“He always talked about the politics but never of the actual day,” she said.

Koch and her mother, a teacher at Pearl Harbor, were evacuated from Oahu along with hundreds of other families. They traveled on the third convoy aboard the USS Bliss, a General G. O. Squier-class transport ship, to San Francisco.

“Everyone was afraid of an invasion and being captured and held prisoners of war,” she described.

Once the USS Bliss arrived in San Francisco, Koch and her mother had one more leg of their trip to complete.

“We were evacuated to Minnesota where my mother came from,” Koch added.

Eventually, Koch said her father left Pearl Harbor and was assigned to another military installation.

Every year Koch, now in her mid-80s comes to Pearl Harbor to pay her respects. She meets many World War Ii veterans, although the number dwindles each year. Out of 16 million veterans who served during the war, fewer than 165,000 are still alive. Yet, Koch’s thoughts turned to the fallen veterans from both the Pearl Harbor attack and World War II.

“What registers to me are the heroes who didn’t come home,” she said.

Battleship Nevada: The Epic Story of the Ship that Wouldn’t Sink by David C. Henley

Legacies of the Silver State: Nevada Goes to War