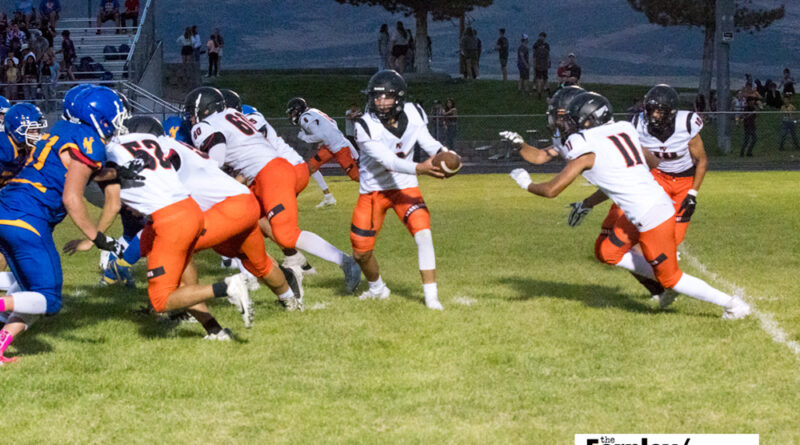 Because construction is behind schedule on the new grandstand, press box and light fixtures on their home field, the Fernley Vaqueros will be forced to host their first “home” game of the season, this Friday night, in Dayton.

Last Friday’s season opener showed that this year’s edition of the Vaqueros is also still very much under construction.

The Vaqueros fell behind early, and by the time they began to find their footing, were in too big of a hole to dig out of in their 34-14 loss at Lowry. That was the worst case scenario for a team with new starters in all 11 offensive positions and nine of 11 on defense.

The Vaqueros were overwhelmed at the line of scrimmage, particularly in the first half, by the bigger, more experienced Lowry offensive and defensive lines, and were often late reacting on the back end, mostly due to hesitation.

“I think you look for the little things,” coach Anfernee Sloan said, when asked how he would go about evaluating Friday’s performance. “I think that’s what it really comes down to, with what we do as a football program.”

Things started off badly for the Vaqueros, who jumped offside before the first snap of the game. Then, Lowry needed just four plays, to go 49 yards for a touchdown and a 7-0 lead, just 2:28 into the game.

A holding penalty negated a nice pass play and stalled Fernley’s next possession, and Lowry followed up with a 10-yard touchdown run by Braden Hammargren with 30.9 seconds left in the first quarter.

It was 24-0 when Fernley began to look like itself on offense. Marciano Montano took a handoff straight up the middle for a 52-yard gain to the Lowry 2-yard line, but the Lowry defensive line stuffed three straight running plays, and a fourth down pass was incomplete. On the next play, Jesse Jeronimo exploded for 87 yards, down to the Fernley 8, where quarterback Jordan Bills scored the next play for a 31-0 halftime lead.

Fernley’s defense, which had been gashed repeatedly through the first half, got consecutive stops to start the second half, holding Lowry to a field goal on one of them after a punt return set up the Buckaroos at the Fernley 22.

Likewise, the offense began to find some success, responding after the field goal with an 80-yard touchdown drive, followed on the next possession by a 79-yard scoring march.

Sloan said that coming out of halftime, he simply wanted to see the Vaqueros start to put together some positive plays they could build upon.

Looking forward to this week’s game against South Tahoe, Sloan said the team would get to work immediately with a film session Saturday morning and spend this week correcting their mistakes.

“I’m so proud, as an alum here at my alma mater, representing it the right way and working with these young men who care about this game so much,” he said.