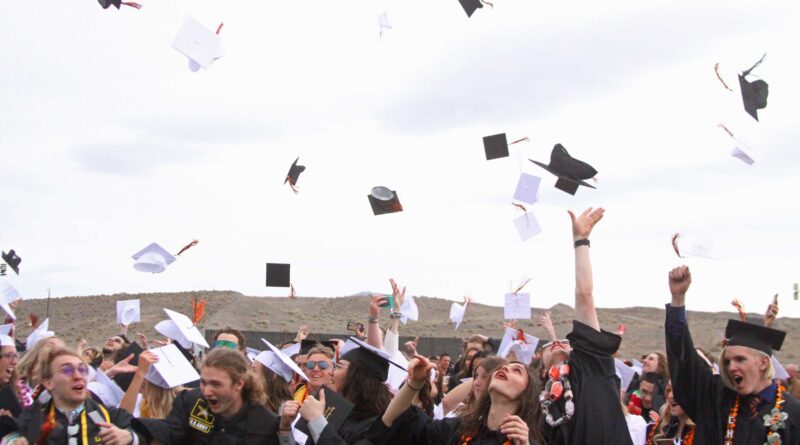 The graduates had all been introduced, crossed the stage to receive their diplomas and returned to their seats, when Fernley High School principal Kent Jones approached the microphone at the end of the graduation ceremony for the Class of 2022 Friday night.

As the graduates waited with expectation, Jones hesitated with a wry smile, before making his final remarks. Finally, he got to the point they had all been waiting for.

“Class is dismissed,” Jones said, in what has become his trademark line to end each graduation ceremony.

The 232 graduates threw their caps in the air, and then immediately were swarmed by family and friends eager to offer their congratulations.

Class president Allyssa Mathern said she is extremely proud of the Class of 2022 and how far they have come.

“I’m excited to see what amazing things the Class of 2022 achieves with their lives,” Mathern said. “Whatever you do with your lives, making it amazing and do amazing things, because I know we are all capable of changing the world.

Salutatorian Persephone Mulei based her speech on a quotation from Charles Lindbergh, “Success is not measured by what a man accomplishes, but by the opposition he has encountered and the courage with which he has maintained the struggle against overwhelming odds.”

Mulei said as she was writing her speech, she could not find a more fitting quote to describe the Class of 2022.

“More change has occurred in our four years than in any other class, and it began our freshman year,” she said.

Mulei talked about how the class banded together stronger than before through the Covid-19 pandemic.

“We adapted and along the way, we learned the value that each of us holds as a student and as a person,” she said.

Mulei told the graduates not to underestimate themselves any longer as they go forward.

“She really encapsulated everything we are feeling right now,” Bixby said. “We are saying goodbye to all we have known for the last few years.”

Bixby said whatever path they are taking, she knows the Class of 2022 is going places.

“I am so grateful for all the great memories of school my peers have given me, and I cannot wait to see where we all go in the future,” she said.