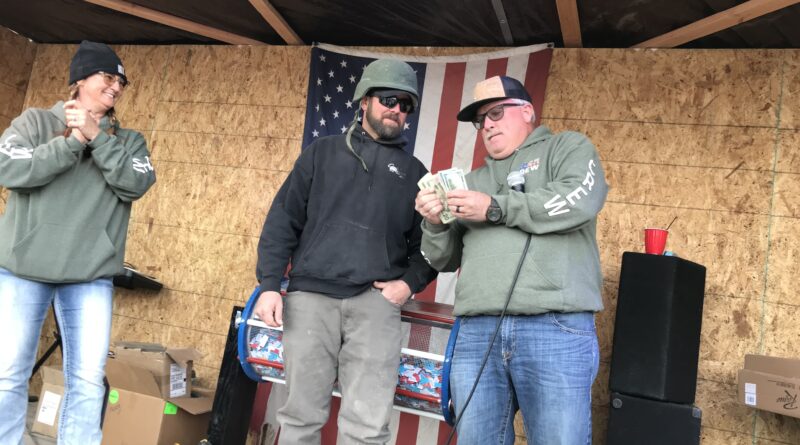 A total of abut 700 people, with 350 off-road vehicles, participated in this year’s event on November 5, the eight year of the event and the seventh poker run.

The event was started in 2015 by Kelly Walsh as a fun outing for friends, but when enough people showed up to make the pot the entry fees substantial enough, participants decided to donate the money to the Nevada Veterans Coalition, rather than awarding it to the winner. Since then, the winner has been awarded a cash prize, but total proceeds of more than $100,000 have been given to the Veterans Coalition and other veterans organizations.

“I’m an off-road guy. I just wanted to show some people some neat trails,” Walsh said.

That first year, Wash said he approached Sharon Serenko and Brett Palmer of the Veterans Coalition, who told him they needed a new laptop. With entry fees from about 130 people, they were able to give the Coalition a new laptop plus about $1,200.

The event has grown since then, and become a full weekend of events, including live music and a cornhole tournament, and the Fern 45 also hosts a golf tournament.

Having started by just inviting a few friends, Walsh said he was touched as he stood on stage announcing winners of the raffle drawings, looking over the gathered crowd of several hundred people.

“The feeling of gratefulness and happiness and camaraderie, it all comes to mind,” he said. “And we’re all like-minded, with the single goal to help veterans out and have fun.”

Walsh said it’s difficult to try to keep track of the money being raised during the event, but he said this year’s goal was to raise $30,000.

“Trying to do the math during the event, our treasurer said we could do it,” Walsh said. “Once we pay all the bills, I think we’re going to be able to go higher.”

In addition to the Veterans Coalition, Walsh said they plan to donate money to Truckee Meadows Community College for Veterans Upward Bound and to the Nevada Veterans Safe House. They also provide miscellaneous appliances for veterans in need.

“It’s nice making so much more money that now we can spread the wealth,” he said.

And from having started with 130 people, to now more than 700, Walsh said he thinks the event will continue to grow.

“I don’t know if that’s a goal per se, but I think the guys and gals around me are willing to try,” he said.