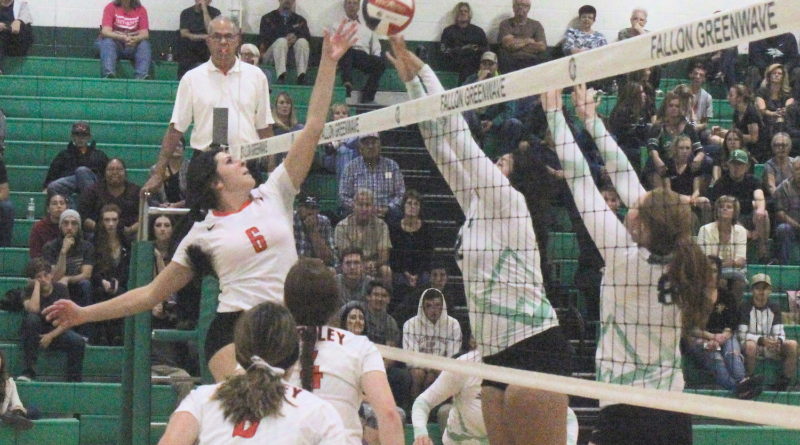 With wins last weekend over Elko and Spring Creek, the Fernley High School volleyball team put itself in position to earn a berth in the 3A North Region Tournament.

“The girls played great on Friday,” coach Kiara Stone said. “They really came together and played as a team. It was really fun to be a part of.”

“We did not play as well on Saturday,” Stone said. “We started off rough, but the girls turned it around at the end and started to play as a team. I was proud of them for not giving up this weekend.”

Fernley finishes the regular season tonight with a game against South Tahoe. With a 5-10 record, the Vaqueros need to win to finish in a tie for 6th place with Elko. If that happens, the Vaqueros and Elko would play a playoff match Monday in Winnemucca, with the winner earning the No. 6 seed for the regional tournament, being played next weekend in Fallon.

“If we lose we do not go to regionals,” Stone said. “Tonight will be a big game for us!”

Following is a story about Tuesday’s match in Fallon, courtesy of the Lahontan Valley News:

The Wave overpowered Fernley in the first two sets, 25-18 and 25-14 before the Lady Vaqueros almost knocked off their hosts, losing 24-21 in Fallon’s final regular season home game. The Wave, though, hosts the Northern 3A volleyball tournament next week.

Fallon set the tone early in the Northern 3A match played at the Elmo Dericco Gym. Fallon grabbed a 5-0 lead as Swisher served four points. Fernley, though, reciprocated by scoring three points and received a timely block from Raye Arroyo, who consistently plugged the middle for Fernley.

The Wave displayed an arsenal of different weapons, however, ranging from Faith Cornmesser’s gingerly tip at the net to Skabelund’s one-handed return. She also had a kill as did outside hitter Paladini.

Midway through the set, Fernley closed the gap to 17-13 after Arroyo ripped a kill down the middle, but a back tip from Paladini on the next point started a 5-1 run. Down the final stretch, each team scored 4 points. Fernley’s Mallorie Campbell and Taylor Richardson each had a kill. A Fernley serve that veered out of bounds gave Fallon its 25th point and the win.

Swisher’s serving allowed Fallon to take a 3-0 lead in the second set. Buckmaster recorded a kill, and Fernley’s Primm Sibson’s kill gave Fernley its first point of the set. Solid serving from Cornmesser and Journey Martin, along with a Paladini kill and block, allowed the Wave to grab a 7-point lead. Two errors and Skabelund’s cross body kill frustrated Fernley’s front row.

Down the final stretch, Fallon outscored Fernley 12-9. Richardson and Arroyo each had a kill, yet it was the mistakes that awarded pints to the Wave.

Buckmaster had a pair of kills at the end that gave Fallon its second set win.

For part of the second all of the third set, Fallon coach mixed up her players’ starting positions.

She had Macie Anderson come in and set, while Lorynn Fagg became the libero.

“These girls … I can ask them to do anything and they will do it,” Daum said. “It gives them a little more experience.”

Daum said the players become stagnant playing in the same position, but moving them around has helped.

“Change is good,” she added.

Fernley saved its best for last in a set that saw eight ties.

Swisher started the set with two service points, givimg Fallon a quick lad. Arroyo’s kill cut the lead in half. Fallon errors gave Fernly a 4-2 lead. Fallon used a combination of two service aces from Cornmesser and Skabelund’s kill to regain the lead. Fallon couldn’t pull away because each team traded points. Paladini ripped a serve ace, while Skabelund recorded another kill. On the other side of the net, Fernley’s Hailey Ames played good defense that resulted in two points.

A tip ball from Kaylee St. Clair and a Fallon ball that went out of bounds tied the set at 12. Fallon surged ahead only to be tied again on a Fernley kill to tie the set at 15. Both Arroyo and Stands dominated the net for their respective teams. Arroyo jumped high to deliver kills against Fallon, and Stands mixed it up with hard-hitting kills or timely blocks.

Skabelund’s kill down the middle of the court was fumbled on the return from Fernely, thus resulting in the winning point for Fallon.

Daum said the team’s serving was much better, and the girls found their spots on the court.

“The girls did a great job tonight on their serves,” she added.  “Our outside hitters timing was better, and out defensive cover was good tonight.

“In the third set, I was actually proud of them,” said Fernley coach Kiara Stone in describing her players. “I put in girls who sat for the first two sets, and they came in and played well.”

Stone said Arroyo worked hard in the middle with her numerous kills and blocks against Fallon. At times, she felt her front row frustrated Fallon

“I have four seniors, but three of the seniors usually start. My setters are young and Raye (Arroyo) will be here next year

Despite their overall youth, Stone said the players are scrappy and still dive after the balls knowing they may not have a chance to return them to the other side.

As Fallon begins to head into the postseason next week, Paladini said the Wave is playing well.

I feel we did I pretty good, but the team played well; it was one of our better games,” she said. “The team reacted well when we sere switching things out.”

Paladini sees a promising future for Fernley as well.

“They are a good team,” she said. “I’m not surprised how they played.”