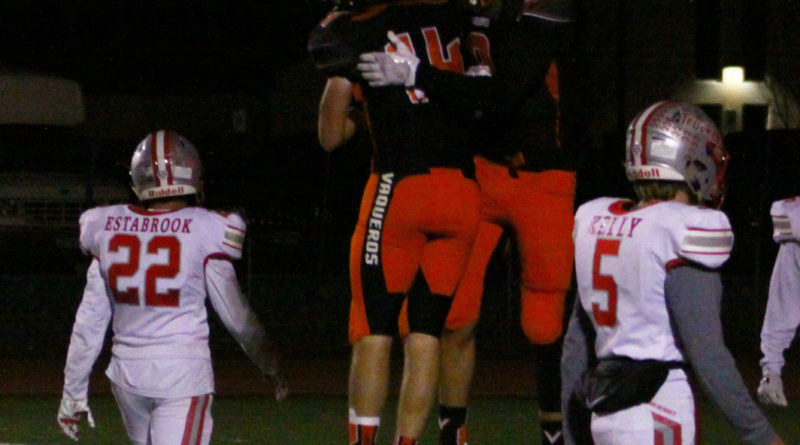 Three different people came up to congratulate Fernley High School football player Lonnie Slapinski one day last week when he was at the prime rib buffet at the Pioneer Crossing Casino. Coach Chris Ward said several people stopped him to talk football or ask questions while he was at Starbucks.

And quarterback Zach Burns had three well-wishers chat him up when he went for a haircut.

With an undefeated league season and a win over Truckee last week in a regional semifinal game, the Vaqueros have captured the attention and the imagination of the community, and the players and coaches have noticed.

“It’s good to see. That’s the way small towns like this should be,” Ward said. “Not just football, but with all our sports. It’s nice to know that a lot of people are paying attention to us.”

Signs of the community’s excitement over the success of the football team were evident all over town as the Vaqueros prepared for Saturday’s 3A state semifinal game against Mojave.

A mention of the football team at the Chamber of Commerce’s weekly Ambassadors breakfast Tuesday morning drew a rousing ovation. The North Lyon County Fire Protection District had a reminder about Saturday’s game posted on its message board outside the Main St. fire station, and Carpet King is hosting a community tailgate party before the game Saturday, after a large crowd showed up for the tailgate party before the Truckee game.

The Vaqueros will face a formidable foe in Mojave, which is 9-2 overall, finished 4-1 in the Southern 3A Sunset League and beat Virgin Valley 46-20 in a Southern 3A semifinal game last Thursday.

The game is at 1 p.m., with the winner advancing to the state championship game next Saturday.

The Rattlers rely on the ground game, rushing 391 times for 2,871 yards and 36 touchdowns, averaging 7.3 yards per carry and 261 yards per game as a team. Mojave have had 17 different players rush the ball this season, and 11 of them have scored a touchdown.

The team’s offensive leader, though, is running back Tawee Walker, a powerfully built runner at 5-foot-9 and 195 pounds. Walker is Mojave’s leading rusher with 1,485 yards on 147 carries, a 10.1 average, with 17 touchdowns. He’s also completed 4 of 7 passes for 81 yards and a touchdown, and caught six passes for 82 yards and a score.

Quarterback Xavier Delong completed 30 of 74 passes, but for 600 yards and six touchdown, with 3 interceptions. As a team, Mojave only attempted 84 passes this season, completing 37, but those went for 707 yards and seven touchdowns.

They do it with Delong in a shotgun formation with Walker lined up close beside him, where Walker sometimes takes a direct snap. The Rattlers use their other backs in a variety of formations, sometimes in a slot or wing position and sometimes lined up behind the line of scrimmage but in front of the shotgun set, offset either left or right.

“The team we’re playing is kind of unorthodox in what they do,” Ward said. “They don’t have any splits so you can’t jump gaps, and blitzing doesn’t really help you. You can bring it from the outside, but you’ve got to make sure you’re not getting blown off the ball.”

Walker had a 65-yard touchdown run against Virgin Valley, and most of the Mojave’s scores in that game came on big plays, including a kickoff return for a touchdown.

“I think they’ve got about three guys who can take it to the house any time they get their hands on it,” Ward said. “At this point in the season, everybody you play is good, so you gotta be ready for it.”

The Rattlers can be as confounding to opponents defensively as they are on offense.

“They’re very similar to what they do offensively, it’s kind of hard to figure out,” Ward said. “We think that they’re basing out of a 4-2-5 and a 3-3 stack, and they walk guys up so it’s hard to tell how many down linemen they’ve got.”

With all of those players walking up to the line of scrimmage, the Rattlers can bring blitzes from every angle, and Ward said that’s the main thing the Vaqueros are preparing for this week.

The Vaqueros will be without their own leading rusher, Willy Pritchard, who also leads the defense in sacks, with 11.5. Pritchard suffered a knee injury during last week’s game against Truckee.

Ward said the key to the game for the Vaqueros will be controlling the line of scrimmage on both sides of the ball.

“If we can put them into passing situations, I think we’ll be just fine, because they don’t throw the ball real well,” he said. “They don’t like to punt, but if we can get them into situation where they have to punt, their punt team’s not real good, so that would be a huge plus for us.”

The Vaqueros players are excited for another chance to play at home and relish the support they’ve gotten from the community.

“It’s cool to have the whole town around us,” said senior wide receiver/linebacker Cameron Bertok. “It’s big, it’s something special.”